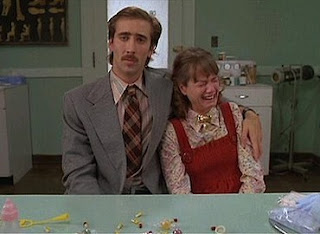 Written, produced, and directed by Joel & Ethan Coen, Raising Arizona is the story of an ex-convict and his cop wife's desire to have a kid only to learn they're unable to. Learning about a set of quintuplets, whose father is a rich furniture entrepeneur, the two decide to kidnap a baby as they deal with all sorts of people including a biker from hell. The film is an indication of the Coen Brothers strange and quirky sense of humor that would be one of their definitive attributes of their career. Starring Nicolas Cage, William Forsythe, Randall "Tex" Cobb, Trey Wilson, Sam McMurray, and future Coen Brothers regulars Frances McDormand, Holly Hunter, John Goodman, and M. Emmet Walsh, Raising Arizona is the first of many great films from the Coen Brothers.

After being busted for robbing a convenience store, H.I. McDunnough (Nicolas Cage) meets a cop named Edwina (Holly Hunter) whom he falls for as he would often see her following his parole and eventual run-ins with the law as the two eventually get married. Leading a quiet life in a suburban trailer park, H.I. works at a metal factory as he and Ed hope to have children until they learn that Ed is unable to have children. After Ed quits her job as a cop due to her mood, she and H.I. learn that local unpainted furniture entrepreneur Nathan Arizona (Trey Wilson) and his wife (Lynne Dunum Kitel) has gained a set of quintuplets. Ed and H.I. decide to kidnap one of them to raise as one of their own as Ed hopes it would help H.I. become more mature.

Meanwhile, two prison buddies of H.I. in Gale (John Goodman) and Evelle Snouts (William Forsythe) had escaped from prison as they crash at H.I. and Ed's home for a few days much to Ed's chagrin. H.I. would later have a nightmare about a biker from hell named Leonard Smalls (Randall "Tex" Cobb) whom H.I. fears will bring trouble as a search for Nathan Jr. is on as Nathan Arizona deals with the FBI. H.I.'s trouble with domestic life is challenged by picnic with his foreman Glen (Sam McMurray) and his wife Dot (Frances McDormand) who brought their kids. When Glen makes a lewd suggestion to H.I. about Ed, H.I. is upset as he later tries to rob a convenience store that leads to more issues with Ed. When the Snouts reveal plans to rob a bank, they want H.I. involved as they also learn that the baby is Nathan Jr. whom they use as collateral.

With Small making a visit to Nathan Arizona about the reward, the Snouts take Nathan Jr. for the robbery which goes fine until something goes wrong as H.I. and Ed try to retrieve Nathan Jr. There, they deal with the evil force that is Leonard Smalls as the couple do everything they can to save the baby.

What makes Raising Arizona a Coen Brothers film is its eccentric tone and energy. Every line and scene is always offbeat somewhat and features some sort of reference of past or future Coen Brothers film including a reference to Sam Raimi's Evil Dead which Joel was an editor in that film. The film's script features hilarious one-liners and stupid jokes while the direction is top-notch in its absurdity, notably the chase scene that is shot wonderfully by cinematographer Barry Sonnefeld along with the fast-paced editing of the Coens Bros.' alias Roderick Jaynes. Even the film's music is quirky, notably the yodeling Western stuff and the suspenseful music of Smalls composed by longtime Coen Brothers collaborator Carter Burwell.

Then there's the inspiring cast of Raising Arizona. Nicolas Cage is amazing as the loser, cartoon-like H.I. who keeps putting out great one-liners and performs amazing physical comedy as he looks like a demented stick figure. Holly Hunter is a joy to watch as she plays a hard-nosed woman who wants everything perfect while she too, pulls a funny scene or two including her confrontation with Smalls. Randal "Tex" Cobb is menacing and downright funny as Smalls who brings fear to the audience, especially when he kills a bunny rabbit, a lizard, and a flower.

The late Trey Wilson is hilarious as Nathan Sr. while Sam McMurray, M. Emmet Walsh as a talkative metal shop worker, and Frances McDormand standout in their respective characters, notably McDormand who was so loud in the film; it's easy to forget that she can be funny. William Forsythe has funny moments as Evelle Snouts while the best performance overall goes to John Goodman as Gale Snouts who just comes up with hilarious lines and of course, the screams which is a must have in a Coen Brothers film. Finally, credit should be given to the 15 babies who played the quintuplets who were so darn cute!

Raising Arizona is a hilarious and very eccentric comedy from the Coen Brothers. The film is among one of their key works as well as a comedy that is truly out there. Notably as it features characters and situation where it strays from convention allowing the film to standout against a lot of the comedies of the time. In the end, Raising Arizona is a fantastic and truly entertaining film from Joel & Ethan Coen.

The Coen Brothers Films: Blood Simple - Miller's Crossing - Barton Fink - The Hudsucker Proxy - Fargo - The Big Lebowski - O Brother, Where Art Thou? - The Man Who Wasn't There - Intolerable Cruelty - The Ladykillers (2004 film) - Paris Je T'aime-Tuileries - To Each His Own Cinema-World Cinema - No Country for Old Men - Burn After Reading - A Serious Man - True Grit (2010 film) - Inside Llewyn Davis - Hail, Caesar! - The Ballad of Buster Scruggs

This was actually the first Coen Brothers movie I ever saw. I didn't find out they had done a couple of dramas prior to this until a few years later.

This has one of the two funniest chase scenes I have ever watched (the other being in What's Up Doc).) The capper is when you finally realize why he is giving her directions.

This was also the first Coen Brothers film that I saw when it was on HBO when I was a kid. It's my parents' favorite Coen Brothers movie though they don't really know who they are.

Please have Holly Hunter back in a Coen Brothers comedy!

This is one of my favorite Coen Bros films. Also Cage was great in this (a rarity). Spot on review!

@Dariru-Yeah... what happened to Nic Cage? He used to make really good movies.

I guess this is what happens when you don't pay taxes.

One of my fav Coen films,the guy in motorcycle is a hilarious dumb-ass!!

@David-I do like Smalls although it wasn't necessary to kill all them little critters like that. It's just wrong.

Yeah, love this movie. From when Cage actually cared about what he was doing (or at least seemed to)

@Black Planet-He was extraordinarily gifted and was willing to do anything.