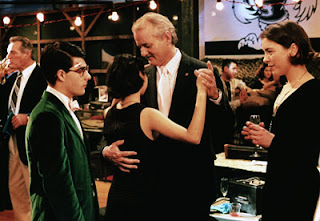 Directed by Wes Anderson and written by Anderson and Owen Wilson, Rushmore is the story of a 15-year old prep school student who befriends a disillusioned millionaire as they both fall for a widowed first grade teacher. The two embark on a feud that becomes troubling as the two deal with their own personal issues. The film is an exploration on youth and the relationships they have with adults as the film does more than just be a high school story. Starring Jason Schwartzman, Bill Murray, Olivia Williams, Seymour Cassel, Stephen McCole, Luke Wilson, Mason Gamble, Sara Tanaka, and Brian Cox. Rushmore is a lively yet exhilarating film from Wes Anderson.

Max Fischer (Jason Schwartman) is a 15-year old student at the prestigious Rushmore Academy as he enjoys being a student where he forms several clubs and participate in various extracurricular activities that included leading school plays. Despite being ambitious in those activities, he is school's worst student as Max is also a liar where he claims that his barber father Bert (Seymour Cassel) is a neurosurgeon. When the school's headmaster Dr. Guggenheim (Brian Cox) puts Max on academic probation, Max tries to fulfill his duties with friend Dirk Calloway (Mason Gamble) where they meet business tycoon Herman Blume (Bill Murray) at a seminar at the school. Blume's twin sons Donny and Ronny (Keith & Ronnie McCawley) attend Rushmore as Herman finds a friend in Max while Herman is dealing with his own morose life that includes his bratty sons and neglectful wife (Kim Terry). When Max checks out a Jacques Costeau book, he learns that the school's new first grade schoolteacher Rosemary Cross (Olivia Williams) has been checking the book out as Max falls for her.

Wanting to impress her, Max gets Latin back into the school's curriculum while wanting to make plans for an aquarium due to her love for fishes and various sea creatures. Max turns to Blume for help as Blume becomes infatuated with Rosemary during a dinner to celebrate Max's play version of Serpico which becomes a disaster due to the presence of Rosemary's friend Dr. Peter Flynn (Luke Wilson) as Max thinks it's her boyfriend. Due to Max's attempt to create an aquarium near the school, Max is kicked out of Rushmore as he's forced to go to public school where he meets the ambitious Margaret Yang (Sara Tanaka). After an encounter with Scottish classmate Magnus Buchan (Stephen McCole) at Rushmore about Dirk's mother (Connie Nielsen), Max makes a lie that would eventually damage his friendship with Dirk while Blume starts a secret relationship with Rosemary.

After learning about the relationship, Max exposes the news to Mrs. Blume as a war between him and Blume explodes with Rosemary resigning from Rushmore as Max also dropping out of school due to the war. Working with his dad at the barber shop, Dirk visits with some news about Dr. Guggenheim's stroke where Max also meets Blume at the hospital. Realizing that Rosemary isn't over the death of her husband, Max decides to make amends as he also gets Margaret's help to fix things as he would stage his most ambitious play to date.

While retaining the optimistic innocence that was in Bottle Rocket, Rushmore is more rooted in melancholia and light-hearted humor. Notably of its three central characters, since they all have a sense of sadness around them. Max, is a kid trying to find himself only to be hit with sadness when he doesn’t get what he wants only turning to the grave of his mother. Miss Cross is a sullen woman who remains troubled by her husband's death and how Max reminds her of him. Then there's Herman Blume who is a man that has everything but is so morose by his lifestyle and everything he has, there is nowhere for him to turn to.

The genius of Rushmore really goes to the team of Wes Anderson and Owen Wilson for finding light-hearted sentimentality in the most offbeat places. They create characters that are flawed in their own ways, even in the most sympathetic of places while smaller characters appear for humor or dramatic purposes. It's a very intelligent coming-of-age story with characters developing into something more. With Anderson bringing in great scenery, his direction is very different from his previous film since he uses every eccentric idea for something that is light-hearted and humorous. Even in the scenes with the play, there is a lot of humor and small theatricality to it as it's Anderson's best work as a director so far.

Helping in the directing is longtime cinematographer Robert Yeomen who brings in a colorful look to the films in its interior sequences along with some wonderful, dreamy textures in many of the film's exterior scenes around the Rushmore academy. Production designer David Wasco along with wife and set decorator Sandy Reynolds-Wasco and art director Andrew Laws brings in a lovely, colorful feel to school of Rushmore with its dark yet natural colors while the stage production of Max's plays are a lovely spectacle. With Karen Patch bringing in some nice costume work, notably on Max's plays and the suit that he wears, the film has a nice look. With longtime editor David Moritz bringing in a leisurely-paced editing style that gives the film a smooth, offbeat film, the movie does not lose rhythm.

Another great element in all of Wes Anderson's films is the music with a great, off-kilter score from Devo's Mark Mothersbaugh bringing in a nice, jazzy tone to the film as well as harpsichord like arpeggios to play off the film’s innocence. Then there's film the film diverse soundtrack filled mostly with British rock music with stuff by the Who, the Rolling Stones, John Lennon, the Faces, Creation, the Kinks, Chad & Jeremy, Donovan, and a couple of cuts from Cat Stevens plus jazz musician Django Reinhardt and French singer Yves Montand. All of those tracks are used very well to convey teen angst as well as the film's lighthearted sentimentality.

Then there's the film's amazing cast with some great and small performances from not just Anderson's friends like Stephen Dignan, Dipak Pallana, Eric Chase Anderson, Brian Tenenbaum, Andrew Wilson, and the always hilarious Kumar Pallana with his one-liners. Also memorable were the McCawley teens as Herman Blume's evil twins and Kim Terry as Blume's wife. While Anderson regulars Luke and Owen Wilson (the latter appears as a picture) only had small roles, Luke is generally funny as Dr. Peter Flynn while Connie Nielsen makes a memorable appearance as Dirk's sexy mom. Sara Tanaka is wonderfully exquisite as the sweet Margaret Yang as well as Mason Gamble who gives an excellent performance as Max's best friend. Stephen McCole is amazing as the curse-wielding Scots Magnus with his hilarious one-liners as well. Seymour Cassel is excellent in the role as Max's simplistic father while Brian Cox rules as Dr. Guggenheim with his tough but sympathetic performance as Max's headmaster.

Olivia Williams brings a calm, complex performance as Rosemary Cross with her maternal-like stature and melancholic tone as a woman who is trying to move on but only find her suitors to be like children. Williams really brings the sweetness and sadness of the film that is enriching. Jason Schwartzman is the film's real breakthrough as the precocious and ambitious Max Fischer. While Max may not have some likeable qualities, Schwartzman makes sure that Max is a kid that an audience can relate to in terms of dreams along with a sadness while trying to understand the world. Schwartzman is amazing and is really the soul of the film.

The film's best performance easily goes to Bill Murray. While it's not in the realm of comedy classics like Caddyshack, Stripes, Ghostbusters, Scrooged, and What About Bob?, Murray shows more of the same range as an actor that he did years ago in Groundhog Day. Playing the morose and self-loathing Herman Blume showed what brilliance Murray can do in making a very pathetic character into someone we care about despite his flaws. It's no surprise in why Anderson wanted to work with Murray all the time and it's his performance in this film is really a precursor to his greatest performance in Sofia Coppola's 2003 film Lost in Translation. It's Murray's approach to subtlety and offbeat comedic timing that makes the Herman Blume character one of the most memorable as he brings in great chemistry with Schwartzman and Williams in their respective scenes.

If there’s one film from Wes Anderson to start with, Rushmore would be the film to see first. The film is truly one of Anderson's most touching and entertaining films of his career as it features a truly outstanding ensemble led by Bill Murray, Jason Schwartzman, and Olivia Williams. The film is also among one of the best high school movies that strays away from its typical class formula as well as having an energy that is truly intoxicating to watch. In the end, Rushmore is a brilliant film from Wes Anderson and company.

I did not see many Bill Murray films,but I like his performance even when he is not funny,like Lost in Translation and Broken Flowers.His empty face is prefect for these 2 films.I have seen all WA films,my fav is the royal tenenbaums

Bill Murray is among my favorite actors as I've listed some of my favorite performances of his 2 years ago. Rushmore is still my favorite Wes Anderson film. Besides, I could be done w/ my Auteurs piece on him probably next week.