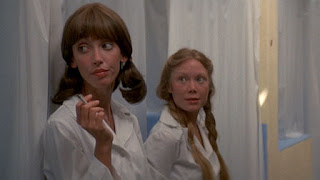 Written and Directed by Robert Altman, 3 Women is the story of a young woman who moves to California where she becomes attached to her new roommate while hanging out with a pregnant artist and her cowboy husband. The film is essentially Altman exploring the world of identity as it is inspired by Ingmar Bergman‘s 1966 classic Persona. Starring Sissy Spacek, Shelley Duvall, Janice Rule, and Robert Fortier. 3 Women is a mesmerizing yet haunting film from Robert Altman.

Arriving from a small town in Texas is a young woman named Pinky Rose (Sissy Spacek) who gets a job working at a health facility for elderly people where she meets a vivacious, chatty woman named Millie Lammoreaux (Shelley Duvall). Pinky is intrigued by Millie as she shows her around as Millie is often talkative about her life while the shy Pinky is drawn to her. When Millie’s old roommate Deidre (Beverly Ross) has moved out to live with her boyfriend, Pinky answers the ad where Millie takes her to a saloon that is run by a former stuntman named Edgar Hart (Robert Fortier) while his wife Willie (Janice Rule) is a silent mural painter who is currently pregnant. While Pinky is amazed by this new world and by Millie, things eventually start to crumble as Millie becomes annoyed by the naïve Pinky who is secretly reading Millie’s diaries.

On one particular night when Millie wants to have a dinner party with Deidre and some friends, things go bad when Pinky makes a mess of herself as she later meets Deidre who couldn’t come to the party due to an engagement. Millie decides to go out on her own where she returns with a man at the apartment leaving Pinky in distress where she does something that would shock everyone at the apartment. Feeling guilty, Millie calls Pinky’s parents (Ruth Nelson and John Cromwell) where Pinky eventually wakes up from her coma where her behavior shocks Millie. Notably as Pinky starts to refer to herself as Millie as she becomes quite dominant as she flirts with Edgar leaving Millie confused about what had just happened. Yet, it would be an event that would force the two to get back together where things become more confusing on who these women are.

The film is about two different women who become roommates in a Californian apartment where they each display very different personalities. In the course of the film, one is entranced by her while the other starts to feel annoyed by her presence. An incident based on one woman’s desire to be with a man where her roommate would do something that would nearly kill her. Suddenly, behaviors change where the two women’s personalities start to change through elements of surrealism and drastic events that would have these two women collide while there’s another woman wandering around in the background who is truly alone in this strange world.

Since this is a film about identity, Robert Altman is more concerned about who these two women are and why there’s this other woman who is always in the background painting murals or looking at the ones she already made. Both protagonists are women named Mildred though it’s a name Pinky hates until she decides to call herself Millie in the second half to annoy the other Millie. The screenplay that Altman creates is very loose in its storytelling though it has the approach to dialogue and over-lapping dialogue that he’s known for. Yet, he changes gears from the first half to the second half where they very chatty Millie becomes more silent while Pinky becomes less caring and crueler the same way Millie was. Then there’s Willie who is this silent woman in the background as she rarely speaks where she creates this art that seems to say a lot about the world of identity.

Altman’s direction is a wide mix of styles ranging from very straightforward yet wandering compositions to surreal images such as the film’s opening credits where water seems to wade around the camera as the shot is focused on these murals. A lot of these surreal moments with the camera wading in the water in these strange montages is obviously a nod to Ingmar Bergman’s Persona for the way these two women named Mildred are linked. The direction has Altman creating some amazing close-ups and two-shots where one character is in focus while another is in the background either blurred or looking at that other person. Altman is always fixated on these two women where the travel around the Californian desert to go to this ruined saloon where there’s men having target practice or Willie doing her art all by herself.

The direction also has Altman trying to create an intimacy with the two women where he would find ways for one character to dominate another as he is also interested in what’s going on outside of this apartment where there’s always something going on. There’s a lot of shots in these apartments yet he remains focused on these three women. The film’s climatic ending where all three women become the focus of the story reveal a lot of character changes that happens. Notably the film’s ending where the women become one in the same but all have different personalities and such where it’s an ending that is very strange and almost anti-climatic. Yet, it’s effective for where these women where early in the film to what they become at the end. Overall, Altman creates a truly dazzling yet hypnotically-ravishing drama about the world of identity.

Cinematographer Chuck Roscher does a superb job with the film‘s very dream-like yet colorful cinematography to play out the sunny Californian deserts to the nighttime exteriors in the apartment scenes. Editor Dennis Hill does excellent work with the editing by creating surrealistic montages filled with dissolves and jump-cuts to play out these strange dreams while a lot of the film is quite straightforward in its approach to cutting. Art director James D. Vance does great work with the design of the apartment Millie and Pinky stay along with the spa they work and the saloon that they hang out at. The mural design by Bohdi Wind is incredible for the way it plays out the surrealism of the film as well as the idea of three women being linked to one another.

Sound editors David M. Horton and Bill Phillips do wonderful work with the sound to play out the intimacy of the apartments as well as some of chaotic nature of some of the parties and target practices that the characters encounter. The film’s score by Gerald Busby is brilliant for its woodwind-driven score led by a flute to play out some of the film’s dramatic and surreal moments.

The film’s cast is phenomenal for the ensemble that is created as it includes some notable small performances from Beverly Ross as Millie’s former roommate Deidre, Craig Richard Nelson and Sierra Pecheur as Millie and Pinky’s bosses, Leslie Ann and Patricia Ann Hudson as twin spa workers, Maysie Hoyt and Belita Moreno as a couple of spa workers, and as Pinky’s parents, John Cromwell and Ruth Nelson. Robert Fortier is excellent as the ex-stuntman turned cowboy who tries to woo Millie and Pinky with his cowboy ways. Janice Rule is great in a small but very entrancing role as the artist Willie who often wanders around painting or looking at her murals as she rarely speaks in the film.

Finally, there’s the duo of Sissy Spacek and Shelley Duvall in fantastic performances in their respective roles of Pinky and Millie. Spacek brings a wonderful innocence to her character as Pinky in the film’s first half in the way she displays herself physically or how she often looks at Millie. In the second half, Spacek brings a much wilder performance as a woman who is loose and confrontational in the way she deals with Millie. Duvall has a great sense of charm to the way she presents Millie as she starts off as this talkative yet absorbed woman who likes to have fun without any care for anyone. Then in the film’s second half, she’s grounded back to Earth where she acts kindly to Pinky’s parents and deal with much wilder Pinky. Spacek and Duvall have amazing chemistry in the way they act together as two opposites where they each bring the best in each other as they’re the highlight of the film.

3 Women is a marvelous yet captivating drama from Robert Altman that features remarkable performances from Sissy Spacek and Shelley Duvall. The film might not be one of Altman’s most accessible films but it is certainly one of his most imaginative for the way he explores the world of identity and how women try to create other personas for themselves. In the end, 3 Women is a truly evocative yet intoxicating film from Robert Altman.

Intoxicating is the perfect word to describe this movie. I really adored Duvall's performance - she was so heartbreaking, Millie was very lonely and she constantly kept talking yet nobody paid any attention to her. Spacek was wondeful too, really managed to portrayed both sides of her character.

After watching this, I realized I need the Criterion DVD for this to start my Robert Altman collection.

I was engrossed by that film and those performances. I felt sorry for both women. I would like to have this film played as a triple-feature with Ingmar Bergman's Persona and David Lynch's Mulholland Dr..

The more I think about this film, the more I love it. Duvall is fantastic in the film, such a sad character if you really think about it. I will say that my interpretation of the ending keeps changing. I would love to hear what inspired Altman to go the he route he does with the ending.

@CS-I would like to know as well since I think he did record a commentary for the film's Criterion DVD release.

I need to catch up on some of his films since I've done some of his more famous work. It's time to go to the intermediate stuff.