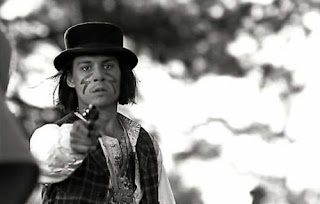 Written and directed by Jim Jarmusch, Dead Man is the story of an accountant who travels to the West in 19th Century America as he encounters an Indian who makes claims that the man is a killer. The film is a period western that plays with elements of the genre while adding surreal imagery to the genre. Starring Johnny Depp, Gary Farmer, Gabriel Byrne, Crispin Glover, Iggy Pop, Alfred Molina, Billy Bob Thornton, John Hurt, Michael Wincott, Lance Henriksen, Mili Avital, and in his final film appearance, Robert Mitchum as John Dickinson. Dead Man is an entrancing yet stylish western from Jim Jarmusch.

Arriving to the company town of Machine from Cleveland, an accountant named William Blake (Johnny Depp) arrives to work for man named John Dickinson. Instead, he is rejected by Dickinson and his business manager John Scholfield (John Hurt) forcing Blake to drown his sorrows at a saloon where he meets a young prostitute named Thel Russell (Mili Avital). After a misunderstanding with her lover Charlie (Gabriel Byrne) forces Blake to defend himself as he flees with a pinto as Charlie is revealed to be Dickinson’s son. Wanting revenge, Dickinson hires three notorious killers in Cole Wilson (Lance Henrikson), Conway Twill (Michael Wincott) and Johnny “The Kid” Pickett (Eugene Byrd) to track down Blake while prompting others to find him with a huge reward in hand.

Meanwhile, the wounded Blake meets an American Indian named Nobody (Gary Farmer) who believes that Blake is the famed poet of the same name. Though Blake tries to tell Nobody that it isn’t true, the two go on a journey to a spiritua world as they would encounter a trio of men (Billy Bob Thornton, Iggy Pop, and Jared Harris) and a missionary (Alfred Molina) where Blake eventually embraces this strange role. While he is still in pursuit of those wanting Dickinson’s reward, Blake continues to his strange journey as he and Nobody briefly separates while dealing with other strange forces prompting Blake to have Nobody take him to this strange, mystical land of the spirits.

Jim Jarmusch’s screenplay is filled with a lot of quirks and dark humor such as the back stories for the three men who are hired to hunt Blake as well as Nobody where his story is the most interesting. Here is this man who is a mix of two different tribes who was captured by white men and exploited for entertainment where he gains knowledge and a deep perspective on his disdain for the white man. Throughout the film, people ask Blake if he’s carrying any tobacco as it would lead to a lot of things while the film opens with this amazing train sequence where a boiler man (Crispin Glover) tells Blake that where he’s going is hell. Some of the film’s dialogue that Jarmusch uses has characters like Blake and Nobody often quoting the poetry of William Blake whether it’s to establish the spiritual journey Blake is embarking or to create some kind of humor that is told.

Jarmusch’s direction is truly hypnotic in the way he presents the film as it’s shot on location in parts of Arizona and Oregon. While Jarmusch does stay true to some of the visual ideas of the western with some eerie close-ups on the characters along with intense shoot-outs. A lot of the film definitely harkens more towards a European style of filmmaking with wandering shots of the skies and locations along with more entrancing shots of some of the locations such as a forest of dead trees. The latter of which is a visual tribute to the works of Russian filmmaker Andrei Tarkovsky as there’s other compositions that reeks of Tarkovsky’s visual style. Many of it is to play out Blake’s journey where it intensifies once he starts to embrace this role that he is destined to play. Overall, Jarmusch truly creates a rich yet evocative western that goes for the unconventional rather than play by the genre’s rules.

Cinematographer Robby Muller does an amazing job with the film‘s black-and-white photography from the way the scenes in the train are lit to many of the film‘s exterior settings for day and night where this a great degree of style. Some of it definitely plays to visual look of Andrei Tarkovsky while many of the nighttime exteriors have an array of lighting schemes from the use of campfires and lanterns to add something that is truly ethereal as Muller’s work is truly seductive to watch. Editor Jay Rabinowitz does incredible work with the film’s very stylized editing from using fade-outs to move the film’s transitions in an unconventional manner to playing with dissolves for some of the film’s more surreal moments when Blake starts to have strange visions.

Production designer Bob Ziembicki, along with set decorator Dayna Lee and art director Ted Berner, does brilliant work from the set pieces created from the frontier town of Machine that Blake first comes across to the beauty of the Makah village in the film‘s third act. Costume designer Marit Allen does excellent work with the costumes from the suit that Blake wears along with the rest of the clothing of the west to the Native American wardrobe that is created. Visual effects supervisors Randall Balsmeyer and Jon Farhat do nice work with the film‘s minimal visual effects that includes a shot where Nobody sees a talking skeleton that he believes is Blake. Sound editor Robert Hein does fantastic work with the film’s sound from the calm atmosphere of the forest scenes to the more raucous world of the saloon that Blake attends early in the film.

The film’s music by Neil Young is marvelous for the way it Young creates sparse moods with his guitar from chugging riffs to melodic jangles to help maintain a tense atmosphere for the film. With bits of folk guitars in the mix, Young’s score also knows how to build up suspense in a few chilling scenes as the overall work is among one of the film’s highlights.

The casting by Ellen Lewis and Laura Rosenthal is phenomenal for the ensemble that is created as it includes small but notable appearances from Jimmy Ray Weeks and Mark Bringleson as two marshals, Butthole Surfers vocalist Gibby Haynes as a man at the train, and in the roles of the young Nobody, Thomas Bettles and Daniel Chas Stacy. Other noteworthy small but memorable parts include Mili Avital as a friendly prostitute named Thel, Gabriel Byrne as Thel’s heartbroken former boyfriend Charlie, Crispin Glover as an eccentric boiler man, Alfred Molina as a dishonest missionary salesman, John Hurt as Dickinson’s cruel manager, and Robert Mitchum in a fantastic final performance as the very intimidating John Dickinson.

Billy Bob Thornton, Iggy Pop, and Jared Harris are hilarious as a trio of fur traders who tell strange stories with Pop wearing a dress to add more humor. Eugene Byrd is excellent as the young killer known as “The Kid” while Michael Wincott is terrific as the very talkative killer Conway Twill. Lance Henriksen is superb as the very quiet but far more dangerous killer Cole Wilson who carries a horrifying secret that even spooks the other bounty hunters. Gary Farmer is great as the eccentric Nobody who often quotes William Blake’s poetry while providing some humor to the film as it’s a fun performance. Finally, there’s Johnny Depp in an odd but entrancing performance as William Blake where Depp is quite restrained in his role as a meek accountant turned killer where Depp provides this amazing presence for a man that is pretty quiet in dealing with his situations as it’s definitely one of Depp’s best performances.

Dead Man is an extraordinary yet visually-astonishing western from Jim Jarmusch. Featuring a spectacular ensemble cast led by Johnny Depp, it’s a film that really gives fans of the western genre something that is very different but also something that does capture the spirit of the genre. For those who interested in the works of Jim Jarmusch, this film is definitely one of the best works of his career. In the end, Dead Man is a mesmerizing film from Jim Jarmusch.

Love Dead Man... definitely one of my favorite Jarmusch films. Good call on highlighting the excellent cast, namely Mitchum, whose cameo here is just priceless. I really need to check this one out again.

Thanks Alex. So far, this is my favorite Jarmusch film.

I was just in awe of what I saw and it looks a Tarkovsky film.

I think I will do Jim Jarmusch as an Auteurs profile for 2013.