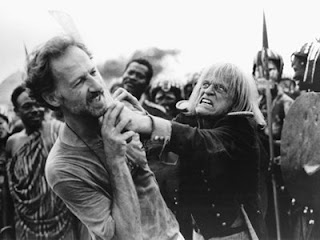 From 1972 to 1987, German director Werner Herzog and actor Klaus Kinski created five different films that were both brilliant and catastrophic. After Kinski's death in November 1991, it was an end of an era despite Herzog's love-hate relationship towards the actor. After his final collaboration with Kinski for 1987's Cobra Verde that proved to be troubling, Herzog ended his collaboration where throughout the 1990s, Herzog went into documentaries and his work in feature films became less and less. In 1999, Herzog made another documentary for European television chronicling his troubling yet inspired collaboration with Kinski called Mein Liebster Fiend (My Best Fiend). The documentary reveals the films the duo made together like Aguirre, the Wrath of God, Nosferatu, Woyzeck, Fitzcarraldo, and Cobra Verde. With interviews from former co-stars like Claudia Cardinale, Eva Mattes, and Justo Gonzalez along with various crew members. Mein Liebster Fiend is an insightful, troubling documentary into one of cinema's most passionate and chaotic collaborations.

The documentary recalls Herzog's memories with Kinski whom he met when he was 13 years old in an apartment where he lived with his mother and two brothers in the 1950s. Herzog would revisit the Munich apartment as he recalls that first memory of Kinski. The film is essentially a documentary of how their collaboration began with Aguirre, the Wrath of God where Herzog wrote a script around the time Kinski was playing Jesus in Jesus Christ Superstar for a European road tour where Kinski received the script. It is in that moment Herzog and Kinski began a very tumultuous yet ambition collaboration through five feature films. During the course of the film, Herzog revisits the Amazon river where he shot both Aguirre and Fitzcaarraldo where Herzog is joined by Justo Gonzalez from Aguirre who also remembers Kinski's violent behavior and phobias towards wasps.

One of the documentary's highlights are the interviews with Herzog's second wife/Woyzeck co-star Eva Mattes and Claudia Cardinale from Fitzcarraldo where the two shared their memories about Kinski where they revealed the warm side of Kinski. Notably as Mattes got a Best Supporting Actress prize at Cannes where she received praise from Kinski. Another highlight of the film involves the making of Fitzcarraldo with footage of Les Blank's 1982 documentary Burden of Dreams that features an infamously violent and intense rant from Kinski who vents his anger at production manager Walter Saxer that proves a scary side of the actor. While Herzog tries to find the balance between the very different sides, he also reveals his frustrations towards Kinski during the production of Fitzcarraldo where both men plotted to kill each other. All of that tension came ahead when they did 1987's Cobra Verde where photographer Beat Pressner revealed an unsettling photo that showed the deterioration of that relationship. Still, Herzog wants to maintain his fondness for Kinski no matter how bad things had ended.

While the film will baffle audiences into why would a director like Herzog would want to work with someone like Kinski. Some will realize that the two working together makes sense since they're both nut-cases while Herzog is not so much in the film's present footage. There are scenes where Herzog returns to the locations and meet the people including extras to discuss everything that went on while looking back at the same spot where a certain part of a film was shot. There's even a scene in where Herzog reveals why he wanted to work with an actor like Kinski as he shows an old 1955 German film called Kinder, Mutter Und ein General (Children, Mother, and the General) that also starred Maximilian Schell. There's a moment,in which, Herzog is transfixed in a scene featuring Kinski. While the doc's tender moments including the film's ending is wonderful, it's still a bit overshadowed by the drama of Kinski and his troubling behavior. Especially since the film also features Kinski's voice through recorded audio in all of his energetic anger, where at one point during Aguirre. Kinski demands for the film to be shot in the same way like Brecht and David Lean while Herzog replies that he doesn't care for either of those men.

It's the drama and Herzog's depiction of his late collaborator that brings both excitement and sadness. Though Herzog is willing to put himself on the line as an egomaniac, he admits it and isn't afraid to show himself in all of his flaws. Though the film is a bit flawed due to pacing, it is wonderfully handled by Herzog in how he tells the story. Particularly through the editing of Joe Bini who cuts a lot of footage and moments in parts of the film to reveal the brilliance and folly of their collaborations as well as how Eva Mattes and Claudia Cardinale reflect on a few scenes they had with Kinski. Cameraman Peter Zeitlinger does great work following Herzog through the locations he's filmed in as well as the interviews to reveal the professionalism and ease he has during the interviews. Longtime composers Popol Vuh bring back the same, atmospheric scores of their work in some of the films they did with Herzog including an angelic piece for the film's final moments.

The Region 1 DVD from the 2000 Herzog-Kinski box set from Anchor Bay is presented in a widescreen presentation of 1:77:1 aspect ratio for 16x9 TV since it was originally made for European TV with help from IFC for a limited theatrical release. The language in both English and German 2.0 Dolby Surround Sound with English subtitles, the DVD's only special feature is the theatrical trailer. There's no commentary needed since Herzog narrates in parts of the documentary. The essay by Michael Felsher doesn't reveal much that the documentary has covered other than a viewpoint from the essayist about the film.

The box set features a little excerpt from longtime Herzog supporter and film critic Roger Ebert about the infamous collaboration between the two actors. Each disc is packed in a thin, plastic case featuring international posters of the film and color coded. With a booklet inside the box that includes an introduction with a quote from Herzog and essays for each film by Jim Knipfel, Cliff MacMillan, Michael Felsher, and Herzog in a conversation with Laurens Staub. This box set is truly one of the must-have for any fan of international cinema while it's a great starting point into the works of Werner Herzog and Klaus Kinski.

While it's not perfect, Mein Liebster Fiend is still a fascinating documentary from Werner Herzog in revealing the tense collaboration with the late Klaus Kinski. While it serves as a nice introduction to their work, it's best to start with Aguirre, the Wrath of God while going through their other films. Fans of Klaus Kinski won't be surprised into his complex behavior though they'll be entertained in what he reveals to himself. In the end, Mein Liebster Fiend is a fitting tribute/hate mail to Klaus Kinski from the always provocative Werner Herzog.

Documentaries: (The Flying Doctors of East Africa) - (Handicapped Future) - (Land of Silence and Darkness) - (The Great Ecstasy of Woodcarver Steiner) - (How Much Wood Would a Woodchuck Chuck) - (La Soufrière) - (Huie's Sermon) - (God's Angry Man) - (Ballad of the Little Soldier) - (The Dark Glow of the Mountains) - (Wodaabe – Herdsmen of the Sun) - (Echoes from a Somber Empire) - (Jag Mandir) - (Bells from the Deep) - (The Transformation of the World into Music) - (Death for Five Voices) - (Little Dieter Needs to Fly) - (Wings of Hope) - (Pilgrimage) - (Ten Thousand Years Older) - (Wheel of Time) - (The White Diamond) - Grizzly Man - Encounters at the End of the World - Cave of Forgotten Dreams - (Into the Abyss) - (On Death Row) - From One Second to the Next

The scene in this film in which Herzog and Kinski embrace at the film festival is one of the most moving things I've ever seen.

If Kinski was still alive, he's probably scare the shit out of everyone.