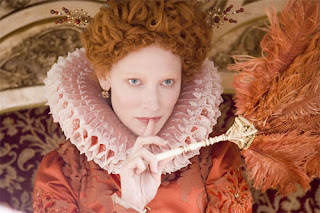 Directed by Shekhar Kapur and written by Michael Hirst, Elizabeth tells the story of Elizabeth's early life before she became Queen until she was accused of making murder attempts towards her half-sister Mary. When Elizabeth becomes Queen, she is surrounded by advisors, suitors, and everyone wanting her until she takes control. The film is an exploration as well as a dramatization of Queen Elizabeth's early life before she would assume the persona of being the Virgin Queen as she is played by Cate Blanchett. Also starring Geoffrey Rush, Joseph Fiennes, Christopher Eccleston, Richard Attenborough, Fanny Ardant, Emily Mortimer, Kelly MacDonald, Eric Cantona, Daniel Craig, Vincent Cassel, and in his final film role, Sir John Gielgud. Elizabeth is a powerful, mesmerizing bio-pic.

With England in a state of chaos over religious arguments between Catholics and Protestants, Queen Mary (Kathy Burke) falls ill while giving birth to a child that unfortunately dies as her husband also dies.  With Mary's half-sister Elizabeth set to replace her, Norfolk (Christopher Eccleston) is keen to arrest Elizabeth in his belief that she's part of the Protestant revolt whom she has no part of as she lives a quaint life with her love her Robert Dudley (Joseph Fiennes) and two ladies-in-waiting in Kat (Emily Mortimer) and Isabel (Kelly MacDonald).  After taken to prison with her ladies-in-waiting, Elizabeth is eventually freed when she is summoned to meet her dying sister where Elizabeth is to become the new Queen of England.  With Sir William Cecil (Richard Attenborough) aiding Elizabeth in the deal once Queen Mary dies in 1558, Elizabeth takes the throne as she gets the exiled Francis Walsingham as her advisor.

Still, the state of England is in chaos as they're facing the threat of the Scotland, that is run by Mary of Guise (Fanny Ardant) from France while many try to have the Queen get married to a king for political reasons as she continues to have her time with Dudley.  After a battle against the Scots that goes wrong, Elizabeth has to deal with other lords where she offers them a plan that guarantees her loyalty.  Still, Elizabeth faces assassination attempts as French ambassador Monsieur de Foix (Eric Cantona) suggests that Elizabeth should marry the comical Duke of Anjou (Vincent Cassel).  Instead, the meeting becomes a disaster though Cecil tries to ensure that the Queen must marry to ensure England's security.  After another failed assassination attempt, things get worse when the Pope (John Gielgud) gets involved as he hires the priest John Ballard (Daniel Craig) to assassinate the Queen.

With her relationship with Dudley strained following the assassination attempt as he turns to Spanish ambassador Alvaro de la Quadra (James Frain) for help.  The Queen turns to Walsingham for advice as he would make moves to help ensure England's safety after learning about another assassination attempt involving Ballard, Norfolk, Quadra, Earl of Sussex (Jamie Foreman), and Dudley.  After Walsingham informs Elizabeth, she would make plans that would set the wave for her powerful reign.

While the film is mostly accurate on some parts including the assassination attempts by Norfolk and Mary of Guise. Like many bio-pics before and since, they tend to have serious flaws in terms of dramatic interpretations. Some characters are created fictionally in order to serve as a drama. Yet, screenwriter Michael Hirst does make a fine effort in being true to history as well as basing things on legends. Though some parts tend to be overdramatized including the relationship between Elizabeth and Dudley. Still, the film's direction by Shekhar Kapur is wonderfully observant to show what was going on in England as well as the stories behind the throne.

Notably the scenes of Elizabeth in the aftermath of everything as she becomes the Virgin Queen. The film has a great ending where it was intended to just end with her taking on in this role. Even in a scenario that was similar to the ending of The Godfather. In many ways, this film is more about Elizabeth in an early stage of her life as she becomes Queen. The stuff about her reign however, is another story.

Cinematographer Remi Adefarasin who creates some wonderful lighting schemes from some of the dark, lighting set-ups in the film's earlier sequences to more colorful, spacious sequences in the film's party sequences. Editor Jill Bilcock does some excellent work in the film's editing, notably a scene of Elizabeth rehearsing on what she has to say with the use of jump-cuts to create a bit of humor. Production designer John Myhre and art director Lucy Richardson create wonderfully elaborate set designs for the film's party settings as well as the wonderful use of locations for the castles inside. Costume designer Alexandra Byrne does amazing work with the dresses and suits that looks wonderfully lavish to the period the film is set in. Sound editor Mark Auguste creates tense moments of the film's sound to convey the terror that is coming.

The cast is wonderfully remarkable with some small parts in roles like Amanda Ryan as Norfolk's lover, Terence Rigby as the treacherous Bishop Gardiner, Edward Hardwicke as the sympathetic Earl of Arundel in an early scene of her arrest, Jamie Foreman as the Earl of Sussex, future British pop singer Lily Allen as a young lady-in-waiting, and two small yet memorable performances from current British favorites Emily Mortimer and Kelly MacDonald as two of Elizabeth's loyal ladies-in-waiting. Daniel Craig is great in an early role as a brutal assassin. James Frain is also good as the corruptive ambassador Quadra who tries to win over the mind of Dudley. Eric Cantona is good as the French ambassador Monsieur de Foix while Kathy Burke is excellent as the hateful Queen Mary I.

In his final film role, Sir John Gielgud is brilliant as a hateful Pope who sees the Queen as a threat. Vincent Cassel is very funny and over-the-top as the Duke of Anjou with his knack to be comical and wear dresses. Fanny Ardant is great as Mary of Guise who tries to take control of Elizabeth while having some charm and wit in her role as she meets Walsingham. Christopher Eccleston is great as the conniving, secretive Norfolk who tries to get rid of the Queen in an attempt to become ruler. Joseph Fiennes is excellent as Robert Dudley, the Queen's lover who tries to deal with the new changes of her life that would ultimately led to his own downfall.

Richard Attenborough is great as Sir Cecil, an old advisor who tries to do what is best for the Queen as only sees his failure despite the Queen's gratitude. The film's best supporting performance easily goes to Geoffrey Rush as the mysterious Walsingham who becomes the Queen's right-hand man as he plans assassinations and such. Rush is just great in playing a dark character who can display charm while being cold at the same time.

Finally, there's Cate Blanchett in what has to be one of her greatest performances. Blanchett brings a wonderfully complex performance as a young, carefree, innocent woman who is aware of her possible role. Displaying the kind of insecurities and flaws that is to come from any woman who is about to rule, Blanchett brings those flaws with a grace that isn't seen much in acting. When she becomes Queen, we see a sense of anger and later, coldness as she develops into a strong woman who is trying to help a country in chaos become strong again. It is indeed a majestic performance from the actress.

Elizabeth is an extraordinary period film from Shekhar Kapur that features a towering performance from Cate Blanchett. Along with great production value and a superb ensemble cast that includes Joseph Fiennes, John Gielgud, Fanny Ardant, Christopher Eccleston, and Geoffrey Rush. It's a film that plays up the grandeur of who Queen Elizabeth was in her early years as well as the people who try to bring her down. In the end, Elizabeth is a marvelous film from Shekhar Kapur.

Thank you. I think this was my intro to Cate Blanchett as well.

I saw Elizabeth: Golden Age, but I didn't even know about this one, I should really see it soon. Joseph Fiennes, Christopher Eccleston, Richard Attenborough, Emily Mortimer, Kelly MacDonald, Daniel Craig and Vincent Cassel? yes please!

@Diana-I haven't seen the sequel either though I heard that it isn't as good as the first. With a cast like that, how can you turn it down?

Good, um, post. Like the others this was also the first time I saw Blanchett in a movie. I also found it interesting that Joseph Fiennes was a key player in two of the five films nominated for Best Picture that year, yet got no nominations himself.

@Chip-Well, this was a re-edited review that I wrote years ago.

What ever happened to Joseph Fiennes?

The dude is an incredible actor.