Encounters at the End of the World

Originally Written and Posted at Epinions.com on 12/14/08 w/ Additional Edits. 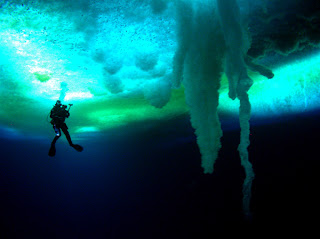 Written, directed, and narrated by Werner Herzog, Encounters at the End of the World is about the exploration of Antarctica with Herzog and his cameraman Peter Zeitlinger meeting the people who are exploring the region as well as its animals, notably penguins. Instead of creating a film similar to the Oscar-award winning film March of the Penguins, Herzog goes for something more intellectual and not overly sentimental with his cynical view of nature. The result isn't just one of his best documentaries but a jaw-dropping look into one of the world's most fascinating places.

After seeing underwater footage of below the ice of Antarctica from friend, producer, and music composer Henry Kaiser. Werner Herzog and cinematographer Peter Zeitlinger travels to the continent as they hope to make a documentary with funding by the National Science Foundation. Hoping not to make a film similar to March of the Penguins, Herzog and Zeitlinger to go the McMurdo Station where they will live for seven weeks. The station is described as a mining town with activities and places that Herzog doesn't like which is dirty in comparison to the beautiful world of Antarctica. Talking to several of the people at the Station, Herzog reveals how newcomers must survive the cold winds and such at very low temperature where they also have to built igloos.

Learning about the long expeditions of Antarctica made famous by Ernest Shackleton, Roald Amundsen, and Robert Falcon Scott, Herzog interviews many scientists about the region and continuing studies and discoveries. Interviewing iceberg geologist Douglas MacAyeal, they learn about the power of icebergs while Herzog go to a colony of seals about the impact of milk from the mother seals. Going to meet Henry Kaiser at a diving camp, they meet with cell biologist Samuel Bowser who is about to take part on his final diving expedition. Uncovering the mysteries and wonders of the water underneath the ice along with new, mysterious species. Bowser along with zoologist Jan Pawlowski reveal some success as Bowser has an eccentric side while he and Kaiser have an impromptu outdoor concert with their guitars.

After more interviews with various people at McMurdo including an Apache plumber who also has Inca-Mayan bloodlines, they meet a computer expert in Karen Joyce who reveals her own adventures and is the most popular entertainer at the camp, and an Eastern European worker who carries a bag of survival gear in case things go wrong. Wanting to know about penguin colonies, Herzog interviews scientist David Ainley where he didn't get a lot of straight answers. Yet, Herzog notices a penguin walking alone towards the mountains where he reveals a rule about contacting them. When the journey goes to Mount Erbus, an active volcano, Herzog interviews volcanologists about its impact and studies revealing that it's still active. Yet, even when some get injured, they great treated and then go back to work. After exploring the cave and tunnels, Herzog interviews physicist Peter Gorham about neutrino detection as the mysteries of Antarctica still bring wonderment.

The film isn't a fluffy, enjoyable story about penguins that March of the Penguins had brought to the masses. Instead, Herzog goes for a more intellectual approach while finding moments that are entertaining. Yet, the legendary man with a cynical view on nature comments on everything he sees and the people he meets. For his cynicism, there's something in Herzog who is equally as fascinated in the world of Antarctica, it's underwater world, and creatures that he has an appreciation for. While Herzog allows his own commentaries and perspective of everything that he sees and thinks, he lets the scientists and personnel have the time to bring their own insight as Herzog becomes part of the audience.

The direction of Herzog is truly fascinating with help from Peter Zeitlinger's amazing camera that captures the beauty and also dangerous world of Antarctica. With Herzog also doing the production sound and being his own boom operator, he captures every moment that goes on. Yet, he also knows when an interview might go overlong where he would make comments and shorten stories. At the same, there's a disdain in Herzog's voice about the accomplishments of Ernest Shackleton where despite what Shackleton did in discovering the region. He criticizes Shackleton over his purpose while also taking shots at so-called tree-huggers and other environmental and animal activists for their ignorance about the language of nature.

While there's a scene where a seal is bagged just to get milk, it's a scene that might get animal-activists angry. Yet, the aftermath reveals from scientists and Herzog himself that the seals aren't being harmed and their behaviors don't change. It's a film that is about how these creatures live where the scientists are just trying to find out without disrupting them or doing any harm. That is something Herzog understands and respects while the underwater scenes that Henry Kaiser shoots are gorgeous and mystifying in the look of the creatures. More importantly, the sound of seals underwater recorded by Douglas Quin reveal something more fascinating as Herzog creates a film that is truly amazing and insightful to watch.

Longtime editor Joe Bini does an excellent job in the editing to gather all the footage and shorten interviews where Herzog is allowed to make commentary. In its 99-minute running time, it's a film that doesn't feel slow or moves very fast while Bini brings a lot of archival footage of the Shackleton expedition. The music of Henry Kaiser and David Lindley is rich in its mix of guitar, blues-based, melodic-driven music with banjos and arpeggio guitars. The soundtrack also features operatic score touches reminiscent of Herzog's previous film scores by Popol Vuh with operatic voices to help create the haunting tone for many of the film's underwater sequences.

Encounters at the End of the World is a rich, fascinating, and visually-amazing documentary from Werner Herzog. Fans of films about natures and science will be amazed in what Herzog has captured while revealing that there's more to tell. Fans of the legendary German director will no doubt be amazed at the story he told. More importantly, the film reveals the unique world of Antarctica without turning it into fluff or some average nature film. In the end, Encounters at the End of the World is an awe-inspiring film from Werner Herzog.

Documentaries: (The Flying Doctors of East Africa) - (Handicapped Future) - (Land of Silence and Darkness) - (The Great Ecstasy of Woodcarver Steiner) - (How Much Wood Would a Woodchuck Chuck) - (La Soufrière) - (Huie's Sermon) - (God's Angry Man) - (Ballad of the Little Soldier) - (The Dark Glow of the Mountains) - (Wodaabe – Herdsmen of the Sun) - (Echoes from a Somber Empire) - (Jag Mandir) - (Bells from the Deep) - (The Transformation of the World into Music) - (Death for Five Voices) - (Little Dieter Needs to Fly) - My Best Fiend - (Wings of Hope) - (Pilgrimage) - (Ten Thousand Years Older) - (Wheel of Time) - (The White Diamond) - Grizzly Man - Cave of Forgotten Dreams - (Into the Abyss) - (On Death Row) - From One Second to the Next

That underwater diving scene is the most fascinating thing I've seen that wasn't narrated by David Attenborough.

Agreed. And it's narrated by Werner Herzog who makes the whole thing more enjoyable.

I must agree this movie is amazing and that Herzog and Attenborough are equally outstanding! Those two manage to capture the unseen beauty of our worlds and place them on TV screens for us to enjoy. 'Encounters' is certainly one of my favorites from Herzog.

@Gregory-It's a film that really allows us to be engrossed into a world that remains very mysterious w/o trying to give it a feel that is often seen in Disney documentaries.

That's why you need someone like a Werner Herzog.

Like all of Herzog's films, this one is better everytime I watch it. That scene when he asks the guy why he left his hometown, and the guy just goes silent... when Herzog says, "You don't have to talk about it..." that, to me, is as moving as Herzog's reaction upon listening to Timothy Treadwell's death. Just remarkable.

@Alex-Everyone who wants to be a documentarian I think should learn from Werner Herzog. He just tries to find honesty in the story and does it with such simplicity.

We need more Werner Herzogs in the world and less Michael Moore.

I passionately endorse your last statement.