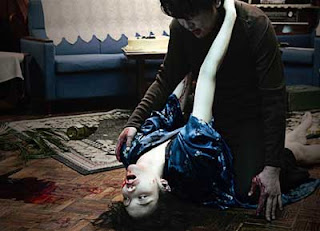 Directed by Chan-wook Park and written by Park and Seo-Kyeong Jeong, Bakwji (Thirst) is the story of a priest who turns into a vampire after a failed medical experiment where he falls for a woman who lives with a cruel family. Inspired by Emile Zola’s novel Therese Raquin, the film marks a shift towards the horror genre for the Korean filmmaker who takes on a different spin for the vampire film genre. Starring Song Kang-ho, Kim Ok-bin, and Shin Ha-kyun. Bakwji is a visually-spectacular and extremely fun vampire film from Chan-wook Park.

After experiencing doubt working as a volunteer at a hospital, Father Sang-hyun (Song Kang-ho) decides to volunteer for a program to find a vaccine for a mysterious virus in Africa known as the Emmanuel Virus (EV). Taking a risk for a blood transfusion, Sang-hyun nearly dies but manages to survive despite having leprosy blisters in his skin. Returning home as an idol for someone who can bring in miracles, he is asked to help an old childhood friend named Kang-woo (Shin Ha-kyun) who is suffering from cancer. Kang-woo manages to recover though he remains ill as Kang-woo’s mother Lady Ra (Kim hae-sook) invites him for dinner and to play mahjong where Sang-hyun finds himself attracted to Kang-woo’s wife Tae-ju (Kim Ok-bin). Suddenly feeling ill at his home, Sang-hyun realizes his illness has returned where he wakes up the next day learning that he’s now a vampire.

Not wanting to kill someone, Sang-hyun decides to drink the blood of comatose patients so he wouldn’t have to deal with blisters and to deal with his thirst. Yet, he finds himself attracted to Tae-ju who is dealing with the cruelty of her mother-in-law and the demands of her ill husband where she and Sang-hyun have an affair. Still, Sang-hyun remains conflicted as he turns to his blind mentor (Choi Jong-ryeol) for answers as his mentor becomes interested in Sang-hyun’s blood to be able to see. After revealing to Tae-ju on who he is, he gives up his role as a priest to live with Kang-woo and the family to be close to Tae-ju as he notices the bruises on Tae-ju’s legs.

Tae-ju makes claims that Kang-woo abuses her where the two plot to kill him where the results would create moral complications for Sang-hyun. After the decision to make Tae-ju into a vampire, Sang-hyun gets more than he bargains for as he also to deals with the shell-shocked Lady Ra and her friends. Notably as Tae-ju starts to enjoy her new life forcing Sang-hyun to make another drastic decision about their fate.

The film is essentially a vampire love story where a confused priest falls takes part in an experiment where he becomes a vampire while falling for a woman who feels trapped in her dreary family life. If one was to take a premise like this, it would’ve been more about the idea of vampires with a lot of emphasis on sentimental love. Well, that is not one of those films as it’s a Chan-wook Park film where there’s no stupid teenage girl who is in love with a vampire and a werewolf. Nor is it some story about a fairy who is in love with two vampires. What Park and co-writer Seo-Kyeong Jeong create is a film where it’s about a man confused by his role to do good as he falls for this troubled woman as he hopes to save her. Instead, things become more complicated as he goes into conflict about the idea of killing people as if taking blood from them was bad enough. Yet, he also has to deal with own role as a man of faith and morality when his lover has become a vampire with none of those attributes.

It’s a story that explores the fallacy of being a vampire told from a man of God who tries to live the life of men but with vampire powers. The love story that Park and Jeong creates is one of passion as Tae-ju is a woman that just wants to escape from her dreary life though she still remains attached to her family for saving her from being an orphan. Yet, they don’t treat her very well as the son is kind of demanding man-child and her mother-in-law is this extremely critical woman who is more concerned about her son than her daughter-in-law. Since Tae-ju is the only person he seems to connect with, it would cause the kind of moral confusions in Sang-hyun. The decision he would make for Tae-ju in her desire to become a vampire is one that he does that would have awful implications for his desire to control things.

Park’s direction in the film is truly in tune with the visual style that’s created in the films he’s made in the 2000s as there’s a newfound maturity to the way he can create humor and romance. A lot of the humor Park creates is presented with more simplicity but also with an offbeat rhythm as he’s not afraid to a scene involving blood seem creepy. There’s gore in some of these violent scenes and vampire buts it’s not overt as Park is more interested in how Sang-hyun wants to take blood and later on, Tae-ju who takes things to certain extremes. The violence does intensify a bit in the third act once Tae-ju becomes a vampire yet it plays to the quirky humor that Park wants. Then there’s the romance where Park really finds a balance in creating a story that involves vampire myths, morality, and dark humor. Notably in the way Park decides to frame Sang-hyun and Tae-ju during a meeting when Tae-ju is having a run late at night barefoot while Sang-hyun is already trying to come to terms with this new role.

It’s all about how they would interact physically at first as he notices the bits of blisters on her feet. It’s a very understated scene that shows Park really just trying to understand these characters as they would eventually become attracted to each other in all sorts of way including in some very intense sex scenes. By the time they’re both vampires, there’s an amazing sequence where they both bounce on buildings as if they’re having a dance of sorts. There’s a lot of great wide compositions and stylized shots that Park creates throughout the film that keeps things exciting but also have the audience pay attention to some of the smaller things that is going on. Overall, Park creates a truly dazzling film that does more for what is expected in the vampire film genre.

Cinematographer Jeong Jeong-hun does incredible work with the film‘s very stylish cinematography from the gorgeous nighttime textures for many of the film‘s exteriors to some stylish lighting for some of the film‘s interiors including its third act. Editors Kim Sang-Beom and Kim Jae-Beom do amazing work by creating an array of stylish cuts to play with the film‘s rhythm that includes jump-cuts and an amazing montage for Sang-hyun‘s transformation. Production designer Seong-hie Ryu and set decorator Jiyeon Song do great work with the set pieces such as Kang-woo‘s home that is later re-decorated into something far more stylish to represent Sang-hyun and Tae-ju‘s new life.

Costume designer Sang-gyeong Jo does nice work with the costumes from the priest robes that Sang-hyun wears early in the film to the stylish old-school robes that Tae-ju and Lady Ra sells. Makeup/hair designer Jong-hee Song does very good work with some of the hair styles created such as Lady Ra‘s look and the look for the more sexualized Tae-ju during the film‘s progression. Visual effects supervisor Jeon-hyeong Lee does fantastic work with the visual effects from the way the wounds are quickly healed to the way Sang-hyun and Tae-ju bounce on buildings in far away scenes. Sound designers Chang-seop Kim and Suk-won Kim do brilliant work with the sound from the intimacy of the mahjong games to some of scenes involving the couple thirsting for blood.

The film’s score by Jo Yeong-wook is marvelous for its orchestral-driven score that features soaring themes to play with its romance and suspense to more rhythmic pieces to help emphasize the film’s quirkiness and romance.

The film’s cast is superb for the ensemble that is created as it includes some notable small performances from Oh Dal-su, Mercedes Cabral, and Song Young-Chang as a trio of Lady Ra’s mahjong players, Hwang-woo Seul-hye as a young woman who camps out the hospital that Sang-hyun has left, Choi Jong-ryeol as Sang-hyun’s blind mentor, and Eriq Ebouaney as a man who is trying to find a vaccine for the disease that Sang-hyun wants to take on early in the film. Kim Hae-sook is great as the very cruel Lady Ra who abuses Tae-ju while displaying a great sense of physicality when she goes into a state of shock. Shin Ha-kyun is pretty good as Tae-ju’s husband Kang-woo who is trying to recover from cancer while being a cuckold to everything that is happening around him.

Kim Ok-bin is brilliant as the unhappy Tae-ju who seeks an escape from her dreary domestic life in the form of this mysterious man she falls for as she later manipulates him into doing deeds. It’s a very fun and lively performance from Ok-bin who definitely seems to relish in playing a vampire as she provides a lot of dark humor to the film. Finally, there’s Song Kang-ho in a fantastic performance as Sang-hyun who is trying to deal with his new role as a vampire as well as growing sense of doubt. It’s a role that has Kang-ho display some amazing physicality in the way he tries to cope with his situation as a vampire by displaying some humility as he and Ok-bin have chemistry that is electrifying to watch.

Bakwji is a truly stylish yet thrilling romantic-vampire film from Chan-wook Park. Featuring outstanding performances from Song Kang-ho and Kim Ok-bin, it is a film that is really one of the best vampire films that refuses to play into conventions while giving audiences something to laugh at and be grossed out by. For fans of Park, this is definitely his most mature feature to date in the way he presents violence, humor, and romance to create what is one of more accessible films. In the end, Bakwji is an engaging yet entertaining film from Chan-wook Park.

Fantastic review! This one is one of my all time favorites - Kim Ok-bin's performance is one of my favorite performances, she captures both the innocent and the mischievous side of her character. There are so many great moments in this movie, such as the killing spree in the apartment when Tae ju is in her blue dress and the dance on the buildings.

This was a true delight for me. I had fun watching this film. It's definitely up there in my list of the best films I've seen for this marathon. This is what vampire films should be. Not the fucking Twilight bullshit or BEEEEEEEEEELLLLL, SOOOOOOKKKIIIIIIEEEEE! More people should see this.