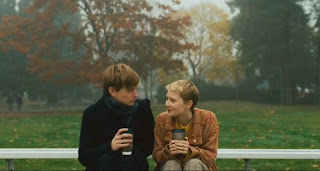 Directed by Gus Van Sant and written by Jason Lew, based on his play, Restless is the story of a death-obsessed young man who falls for a cancer-stricken young women as they her remaining time together. While the man also communicates with a World War II Japanese fighter pilot, who is also a ghost, he has to deal with the loss he‘s endured and is about to face. Starring Henry Hopper, Mia Wasikowska, Schuyler Fisk, Ryo Kase, and Jane Adams. Restless is a touching yet very off-beat drama from Gus Van Sant.

Following the death of his parents a few years ago, Enoch (Henry Hopper) is a teenager who no longer attends school as he spends most of his time conversing with a dead kamikaze pilot named Hiroshi (Ryo Kase) and going to funerals uninvited. At one funeral, he meets a young woman named Annabelle (Mia Wasikowska) where they become friends as they go to funerals and other places where she reveals she is dying from cancer and only has a few months to live. Enoch spends a lot of his time with Annabelle as their friendship grows into romance where he reveals why he lives with his aunt Mabel (Jane Adams) after his parents’ death. While the time becomes fruitful, Annabelle’s time is starting to run out forcing Enoch to come to terms with all that he’s lost as he’s about to lose the girl that he has fallen in love with.

The film is essentially a romantic story about two death-obsessed teenagers who fall in love with each other where one of them is set to die in a matter of months. There, the film explores these two people in the span of a few months where a boy is still trying to come to term with the death of his parents and his own near-death experience while falling for a girl that is very lively and exciting despite the lack of time she has left. While there’s a ghost who watches over this young man as he observes this blossoming relationship, the specter of death would loom as the inevitable is to happen as the character of Enoch would have a difficult time trying to deal with what is going to happen.

Screenwriter Jason Lew succeeds in creating characters who are very interesting in the way they deal with death as there’s also an innocence into the relationship between Enoch and Annabelle. Notably in the way they go to hospitals where they visit the morgue or attend funerals together as they’re often surrounding themselves with death. The character of Hiroshi is someone who is just observing these two people as only Enoch can talk to him yet he is someone who is probably in limbo where there’s moments of him all by himself writing a letter. While a lot of the structure of the screenplay is loose and very unconventional so that the story can explore this relationship. The only thing that doesn’t work entirely is how the melodrama is expected to arrive where it’s execution isn’t as thought out as it could’ve been. That’s the only draw back to a well-written script by Lew.

Gus Van Sant’s direction is quite straightforward for the way he plays out the story about young love. Yet, there are still compositions that are quite engaging for the way he explores this unconventional relationship between two young people. Notably the scene where they’re both lying on the ground with chalk markings around their bodies. There’s also some amazing moments such as the trick-or-treat scene where Van Sant makes the actors feel very comfortable while creating close-ups and wide shots to play out the romance that is happening as it’s set in his home of Portland, Oregon. While Van Sant keeps a lot of the unconventional aspects of the film restrained to observe this relationship, he finds something that is engaging in the story of these two young people while allowing the story to just play out. While the overall work might be considered minor Van Sant, it’s still a better film than what is expected in a film about young love.

Cinematographer Harris Savides does excellent work with the film‘s cinematography from the lush yet colorful scenes for some of its nighttime interior and exterior scenes to a much brighter yet evocative look for the daytime exterior scenes as well as the look in the hospital. Editor Elliot Graham does nice work with the editing where Graham creates some amazing montages to play out the blossoming romance while a lot of it is pretty straightforward. Production designer Anne Ross, with set decorator Sara Parks and art director Benjamin Hayden, does some very good work with the set pieces created such as the rooms Enoch and Annabelle have to the funeral places they attend.

Costume designer Danny Glicker does a wonderful job with the costumes from the black suits that Enoch wears to the more eccentric clothing including the white dress that Annabelle wears to contrast Enoch‘s character. Sound designer Leslie Shatz and sound editor Robert Jackson do brilliant work with the film‘s sound to capture the intimacy of the funeral halls to the broad atmosphere of the locations the characters encounter such as the train bridge. The film’s score by Danny Elfman is superb for its low-key orchestral score that features a take on Carl Orff’s Gassenhauser to play out the romance. The film’s music soundtrack is terrific for its mix of folk and indie as it features music by Sufjan Stevens and Nico in some parts of the film.

The casting by Francine Maisler is brilliant for the ensemble that is created as it includes some memorable small roles from Chin Han as the very kind Dr. Lee, Luisa Strus as Annabelle’s somewhat-aloof mother, Jane Adams as Enoch’s caring aunt, and Schuyler Fisk as Annabelle’s concerned but open-minded older sister Elizabeth. Ryo Kase is excellent as the kamikaze pilot Hiroshi who follows Enoch along in this exploration of death while observing the growing relationship between Enoch and Annabelle. Henry Hopper is very good as the confused Enoch who is trying to come to terms with death as he visits funerals and such to be connected with it where Hopper has some charm to his character though isn’t fully able to pull off some of the film’s heavier, dramatic moments. Yet, he does however have some amazing chemistry with his co-star in Mia Wasikowska.

Mia Wasikowska is the film’s real highlight for the way she creates a character like Annabelle and make so enjoyable to watch. Filled with lots of quirks and charm, Wasikowska brings an understated quality to her performance as a young woman that is dying. Yet, she brings a lot to the performance whether it’s wearing unique clothing to funerals or talking about birds and organizing candy. It is definitely one of Wasikowska’s finest performances.

Restless is a stellar yet engaging romance from Gus Van Sant that features a radiant performance from Mia Wasikowska. Along with noteworthy performances from Henry Hopper and Ryo Kase, it’s a film that works for its exploration of young love and death where the latter is a recurring theme in some of Van Sant’s recent work. While it’s a film that doesn’t reach the heights of a lot of the great films Van Sant has done, it does offer something that his art-house fans and some of his mainstream fans can enjoy. In the end, Restless is a marvelous film from Gus Van Sant.

I really need to see this film - I heard it's mediocre and forgettable and although I like Wasikowska a lot those opinions really put me off from watching it. However your review is more than encouraging!

Well, if you're a fan of Gus Van Sant, it's definitely worth a look.

I might consider it minor Van Sant but it's better than a lot of other people's films.

Plus, Mia Wasikowska is becoming someone I've fallen in love with.

I was not as high on the film as you were. There are segments that I really liked but on the whole I found the story to be average at best.

@CS-I don't think it's one of Van Sant's great films but I would rank it somewhere in between something like Milk and Finding Forrester.

Great review Steven, it's nice to see someone else enjoyed it besides me. I saw this at the London Film Festival last year and I was very impressed by it- it almost made me cry in the theater, something I have never done before. Maybe I am just a sucker for death or cancer stories, but it moved me!

@Diana-Most films about cancer I felt were always sentimental and sappy. This one wasn't though I was still moved by Mia Wasikowska's performance.