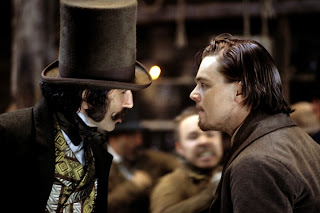 Directed by Martin Scorsese and screenplay by Jay Cocks, Kenneth Lonegran, and Steve Zaillian from a story by Jay Cocks, Gangs of New York is the story of an Irish-American who returns to New York to find that a Protestant crime boss has ruled New York City as he decides to infiltrate the gang to gain revenge for his father’s death. The film is inspired by Herbert Asbury’s 1928 non-fiction book about the war between Catholic and Protestant Irish immigrants in the late 1840s to the early 1860s. Starring Leonardo diCaprio, Daniel Day-Lewis, Cameron Diaz, John C. Reilly, Jim Broadbent, Henry Thomas, Brendan Gleeson, Stephen Graham, Cara Seymour, Eddie Marsan, and Liam Neeson. Gangs of New York is a grand yet exhilarating film from Martin Scorsese.

16 years after a territorial battle between a group of so-called natives and a group of Irish-Catholics led by Priest Vallon (Liam Neeson), Vallon’s son Amsterdam (Leonardo DiCaprio) returns from reform school to find that the land has changed as it’s run by his father’s killer Bill “The Butcher” Cutting (Daniel Day-Lewis) who has managed to gather a couple of Vallon’s associates like McGloin (Gary Lewis) as a lieutenant in his gang and Happy Jack Mulroney (John C. Reilly) as a corrupt constable. Vallon plans to seek revenge as he joins a small local gang that includes old childhood friend Johnny Sirocco (Henry Thomas), Jimmy Spoils (Larry Gilliard Jr.), and Shang (Stephen Graham). After doing some small jobs to get the attention of Cutting, Amsterdam manages to become part of Cutting’s gang.

While being in Cutting’s gang, Amsterdam meets and falls for pickpocket/grifter Jenny Ever Deane (Cameron Diaz) who is also close to Bill that brings trouble to the relationship. When Amsterdam manages to help Bill out in dealing with politician William M. Tweed (Jim Broadbent), Cutting still has issues with the growing number of Irish immigrants arriving into the city as Tweed insists that things are changing. When Amsterdam saves Bill from an assassination, he gains Bill’s trust where Bill tells him about the legendary fight of 1846 where he killed Priest Vallon in whom he considered a great opponent. When Amsterdam’s identity is later revealed to Bill, things become complicated as Amsterdam nearly dies as Bill spares him to have him fight another day.

With the aid of Jenny and an old friend of his father in Monk McGinn (Brendan Gleeson), Amsterdam recovers where he decides to bring back an old symbol to re-start an old war. With an election brewing as Tweed is trying to figure who he should turn to gain votes, the city starts to unravel amidst new draft laws for men to fight in the Civil War. After a series of incidents, Amsterdam and Bill agree to a traditional battle where winner takes all amidst the turmoil of the New York Draft Riots of 1863.

The film is about a young man who seeks revenge for his father’s death in the early 1860s just as the city of New York was going through a huge transition with the growing rise of Irish immigrants as well as immigrants from Europe that would shape the city. There, it’s a film where a man is trying to keep his old ideals in check about America where he is trying to deal with this growing number of immigrants while taking in this young man who would later become his foe. Screenwriters Jay Cocks, Kenneth Lonegran, and Steve Zaillian create an epic story of how this young man tries to infiltrate this gang of hooligans who claim to be naturalists of the country. Yet, he finds a guy like the Butcher to be far more intriguing as someone who respected his opponent.

Characters like Amsterdam and Bill are truly complex in their motivations and how they eventually decide to do battle. Notably as there’s an element of respect in the way they try to conduct the climatic battle they’re to have towards the end of the film. Yet, there’s a lot that is going on in the film when Amsterdam was working for Bill as it involves Boss Tweed’s attempt to rise in the world of politics. Notably as there this back story involving rich men who are trying to find a way to profit from this battle only to become a target of the poor during the New York Draft Riots. It’s the one part of the story that seems to drive away from the main narrative as it does make the script uneven. Still, the screenplay succeeds in creating fully-fledge characters like Jenny as well as a story that is engaging.

Martin Scorsese’s direction is truly vast in the way he presents mid-19th Century New York City from the way he opens the film as the first battle ensues to the climatic battle between Amsterdam and Bill that would become a key moment in New York City’s history. While a lot of the film is shot inside Cinecetta Studios in Rome, Scorsese manages to recreate the idea of what New York City looked like in the early 1860s where he revealed a great contrast between the rich and the poor. Characters would travel in these two worlds as Scorsese wants to establish what a character like Jenny would do in order to survive by stealing. It’s only because she wants to find a way out of a city as she later tries to convince Amsterdam to join her.

The direction is definitely filled with spectacular images such as a wonderfully choreographed dance that Amsterdam and Jenny has along with amazing camera angles to display the city. Notably the battles as it’s very intense, fast-paced, and truly brutal to emphasize what is happening. Even in the build-up where Scorsese is always following the camera with these great tracking shots and later crane shots to just create an atmosphere that is about to explode. Overall, Scorsese creates a film that lives up to the majestic scale about a small piece of American history.

Cinematographer Michael Ballhaus does excellent work with the film‘s very colorful cinematography from the gorgeous exteriors of the locations to the entrancing interiors filled with amazing lighting set-ups to create the tense mood for the film. Editor Thelma Schoonmaker brings incredible work to her editing by utilizing swift, fast-cuts for some of the film‘s battle scenes and Bill‘s throwing skills while creating lots of stylized cuts to help move the film at a leisured pace as it features some of Schoonmaker‘s best work. Production designer Dante Ferretti, with set decorator Francesca Lo Schiavo and art director Stefano Maria Ortolani, does an amazing job with the film’s set pieces such as the look of the upper-class NYC mansions to the look of the Five Points district in NYC to establish the different worlds that is happening around that time.

Costume designer Sandy Powell does great work with the costumes from the suit’s the men wear and the top hats along with the gorgeous dresses that Jenny wears to fit in with the two worlds of the rich and poor. Hair/makeup designers Manilo Rocchetti and Aldo Signoretti do wonderful work with the look of the Butcher with his mustache and hair style along with the red hair for the character of Jenny. Visual effects supervisors Mark Dornfield and Michael Owens do terrific work with some of the visual effects created for some of the city‘s exteriors to present what the city would‘ve looked like back then from far away. Sound editor Phil Stockton does brilliant work with the sound from the way gunshots are fired to the atmosphere of the parties that goes in some of the film’s interior settings.

The film’s score by Howard Shore is superb for the bombast that is created as it features heavy orchestral arrangements mixed in with traditional Irish music to play up the atmosphere as it includes some amazing low-key pieces involving the autoharp and more grand cuts for some of the film‘s battle scenes. Music supervisor Robbie Robertson creates a fantastic soundtrack that is filled with a lot of traditional Irish music and classical music that features contributions from Jocelyn Pook and Linda Thompson along with modern cuts from Peter Gabriel and Afro Celt Sound System for some of the film’s battle scenes. One notable cut that plays in the film’s final credits is a song by U2 that is about the evolution of America from an Irish perspective as it’s a really good song.

The casting by Ellen Lewis is phenomenal for the ensemble that is created as it includes some very memorable small appearances from Cara Seymour as the vicious Hell-Cat Maggie, Eddie Marsan as one of Bill’s henchmen in Killoran, David Hemmings as the upper-class businessman John F. Schermerhorn, and director Martin Scorsese in a cameo as a wealthy homeowner eating with his family. Other notable small appearances that stand out include John C. Reilly as the humorous but corruptible Constable Mulraney, Gary Lewis as the very insulting McGloin, Stephen Graham and Larry Gilliard Jr. as two of Amsterdam’s loyal friends with Graham as the more organized Shang and Gilliard as the more dangerous Jimmy Spoils. Henry Thomas is very good as Amsterdam’s old childhood friend Johnny Sirocco who tries to win over Jenny. Liam Neeson is excellent in a small role as Amsterdam’s father Priest Vallon while Cian McCormack is superb as the young Amsterdam in the film’s beginning sequence.

Jim Broadbent is wonderful as the determined politician Boss Tweed who is trying to find his way to garner votes anyway he can while Brendan Gleeson is great as an old friend of Priest Vallon in Monk McGinn who helps Amsterdam get back on his feet to deal with Bill. Cameron Diaz is fantastic as the very cunning yet charming Jenny who is proven to be a capable ally for Amsterdam as she is her own gal where Diaz really gets to shine in playing someone that is quite tough and is able to take care of herself.

Leonardo DiCaprio is superb as Amsterdam Vallon where DiCaprio proves himself to be a very tough individual who has some charm but also a determination of a guy who is just trying to get to know his enemy and make his move for revenge where it’s definitely one of DiCaprio’s finest performances. Finally, there’s Daniel Day-Lewis in an outstanding performance as the Bill “The Butcher” Cutting where Day-Lewis manages to chew up the scenery as a man trying to maintain his old ideals as Day-Lewis makes his character a man that is larger than life as it’s one of his best performances.

Gangs of New York is a magnificent film from Martin Scorsese that features top-notch performances from Daniel Day-Lewis, Leonardo DiCaprio, and Cameron Diaz. Thanks to a great ensemble supporting cast and amazing technical work, the film is definitely an epic that lives to grand staging as well as a strong and ambitious story that tells about a small piece of American history. While the film may not be up there with some of Scorsese’s great films, it is still a film that isn’t seen much in terms of its grand staging. In the end, Gangs of New York is a marvelous film from Martin Scorsese.

2002 was a quite a year for DiCaprio with two great films. I'm more partial to his work in Catch Me If You Can, but the scope and skill put into this film always makes me appreciate it just a bit more.

Indeed it was. I too preferred Catch Me If You Can because it showed DiCaprio being funny but also intense. That was the film that made me realize he's no longer that kid that from Titanic.