(Played Out of Competition at the 2009 Cannes Film Festival) 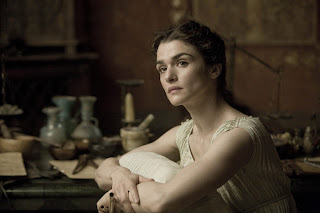 Directed by Alejandro Amenabar and written by Amenabar and Mateo Gil, Agora is the story of a slave who falls for the philosopher Hypatia of Alexandria as she is concerned with changing ideas about the ways of the world in 4th Century Roman Egypt. The film is a historical drama about Hypatia and her philosophies that was deemed controversial at the time. Starring Rachel Weisz, Max Minghella, Oscar Isaac, Sami Samir, Rupert Evans, and Michael Lonsdale. Agora is an ambitious but extremely messy film from Alejandro Amenabar.

It’s 391 A.D. in Alexandria where the famed philosopher Hypatia (Rachel Weisz) is teaching students about her theory on the universe as her students include Orestes (Oscar Isaac) and Synesius (Rupert Evans) along with her slave Davus (Max Minghella). Though Davus is very interested in Hypatia’s theories as he would assist her, tension over religion boils between pagans and Christians where Hypatia’s father Theon (Michael Lonsdale) is trying to sort things out. Instead, the tension between pagans and Christians has Davus be interested in what they’re about while Synesius reveals himself to be a Christian. Yet, Davus is also in love with Hypatia as the tension between the Christians and pagans start to become violent as Orestes gets involved with the battle while Theon is wounded by own slave.

While Davus manages to try and help out Hypatia, he is torn between his sudden interest in Christianity and love for Hypatia where all of the pagans including Theon and Orestes await word from the Romans. What the Roman Emperor reveals would force the pagans to leave Alexandria as the Christians take over while Hypatia becomes desperate to save the scrolls in the library as the Christians finally destroy the place. Davus meanwhile, makes his decision to join the Christians forcing Hypatia to free him as the two go their separate ways. Years later, Orestes has become prefect of Alexandria as he and many have already converted to Christianity while Hypatia becomes more interested in the motion of Sun, Moon, and the universe to fulfill a theory she’s been trying to work on. Davus has become part of a group of Christians as a new conflict is emerging between the Christians and the Jews.

With Orestes overwhelmed with trying to control the conflict, Synesius returns to Alexandria as the Bishop of Cyrene to try and calm things down as the Christians are led by the more extreme Cyril (Sami Samir). Instead, things go out of control when Cyril decides to target Hypatia with claims of witchcraft as Orestes tries to defend her. Instead, Synesius tries to make a deal for Hypatia to accept Christianity only for her to refuse as she makes a personal breakthrough about her theory of how Earth orbits the sun. When Davus learns what Cyril will do to Hypatia, he tries to return to the woman he had loved and save her.

The film is essentially a look into the final years of Hypatia from the eyes of a slave who fell in love with her only to part during the rise of Christianity in Alexandria. There, Hypatia is trying to uncover the theory about how the Earth moves around the sun while she is adored by two different men who are intrigued by her philosophies but are torn by different loyalties. It’s a concept that is quite interesting as well as Hypatia’s theories about the movement of the Earth.

Unfortunately, the screenplay that Alejandro Amenabar and Mateo Gil create is a mess. Largely due to some of the dramatic liberties that is presented as it really makes the story so drawn-out that it loses a lot of its intrigue. Plus, the characters such as Davus and Synesius are badly underwritten while Orestes isn’t as developed as well. For an audience that doesn’t know about Hypatia or some of these characters, it makes the story far more confusing to follow as there’s all of this drama that really becomes quite boring.

Amenabar’s direction is pretty big and ambitious for the way he presents late 4th Century Alexandria with its buildings along with shots of Earth that is presented throughout. The stuff about science is quite interesting but Amenabar seems to try and draw the audience in with all of these dramatic stories that really becomes a bit over-dramatized at times. There’s a lot of compositions that is a joy to watch but the execution of the drama such as the library raid and the stuff involving the battle between the Christians and Jews are poorly managed. The audience wouldn’t really know why there’s all of this tension and the stuff involving Davus’ affections for Hypatia and how he has become part of this group of radical Christians just makes everything else seem uninteresting. The overall result is an overblown and very tedious film.

Cinematographer Xavi Giminez does excellent work with the film‘s cinematography from the daytime exteriors to display the hot sun of Alexandra, though it‘s shot in Malta, to some entrancing work in the nighttime interior and exterior shots in the film. Editor Nacho Ruiz Capillas does fine work with the editing to play out the intensity of the battles as well as the rhythm for Hypatia‘s numerous discoveries as she tries to play out her theories. Production designer Guy Hendrix Dyas, with set decorator Larry Dias and art director Frank Walsh does amazing work with the set pieces created such as the pagan statues and the library that Hypatia loves.

Costume designer Gabriella Pescucci does nice work with the costume design from the robes that Hypatia creates to the different array of slave garbs and Christian uniforms that Davus wears. Visual effects supervisors Felix Berges and Eduardo Diaz do wonderful work with the visual effects to create amazing wide shots of Alexandria as well as the scenes in Earth and outer space though the sequence in the raid where scrolls are being thrown doesn‘t look so good. Sound editor Glenn Freemantle and co-sound designer Tom Sayers do superb work with the sound from the intimacy of the meetings to the raucous world of the crowd gatherings. The film’s score by Dario Marianelli is pretty good for the way it plays out the world with Arabian vocal chants and bombast orchestral arrangements although it does tend to swell up the drama to overblown places.

The casting by Jina Jay and Edward Sands is also good for some of people that is made for the ensemble as it includes some noteworthy performances from George Harris as Heladius Dignitary, Homayoun Ershadi as Hypatia’s assistant Aspasius in the film’s second half, Manuel Cauchi as Cyril’s uncle Theopolis, and Sami Samir as the extreme Christian leader Cyril. Michael Lonsdale is pretty good as Hypatia’s father Theon who tries to deal with these changes in the film’s first half while Rupert Evans is decent as the very quiet and spiritual Synesius who starts off as a student only to become this very spiritual bishop where he doesn’t really get to do anything but say a lot of stuff about being true to God. Oscar Isaac is stellar as Orestes as a man that is trying to win over Hypatia as he becomes the closest thing to a lover that she has although Isaac doesn’t sell some of the melodrama in the film’s third act.

Max Minghella is okay as the slave Davus who would aid Hypatia in her theories during class while dealing with these changes as there’s some good from Minghella but the script’s weakness doesn’t do enough to explain his actions in the film’s second half or why he had become so quiet in that second half. Rachel Weisz is wonderful as the very philosophical yet confused Hypatia where Weisz humanizes the philosopher by displaying a woman who is driven by wanting to find the answers to the universe while having trouble dealing with what to do as a woman with a personal life as it’s one of Weisz’s best performance in an otherwise poor film.

Agora is a bloated and very dull film from Alejandro Amenabar. Despite some great set pieces, interesting thoughts on science, and Rachel Weisz’s performance, it’s a film that tries to be a period epic but without a strong script to support it. It’s a film where history buffs might be interested in the subject but will be disappointed by some of the liberties it took to tell the story. In the end, Agora is a terrible film from Alejandro Amenabar.

I agree it was a very dull movie, I nearly fell asleep watching this. Weisz was excellent, though.

With every film I see, I watch it with low expectations. I tried to ignore what all of the bad reviews had said. Boy, were they right.

There were moments where I wanted to sleep and I was like "get a move on. I don't care about this romantic or religious extremist crap." Weisz is great but man, such a bad film.

I think of all of the films I've seen so far in previous Cannes marathon. I'm not sure which was worse, this or Southland Tales.

I also agree that it was pretty bad, it's really a shame because I totally love that setting too.

@Bonjour-I'm a sucker for these period films as I always enjoy these massive productions.

Man, I was really let down by this because if you're going to make a film like this. Make it really interesting and not play with the historical aspects. I don't know much about Hypatia and her work but the love story really ruined the film for me.