2012 Cannes Marathon: Of Gods and Men

(Winner of the Grand Prix at the 2010 Cannes Film Festival) 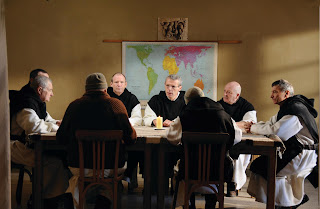 Directed by Xavier Beauvois and written by Beauvois and Etienne Comar, Des hommes et des dieux (Of Gods and Men) is the story of eight Trappist monks whose peaceful life is threatened by fundamental terrorists as they’re trying to decide whether or not to leave their home in Algeria. The film is exploration of faith as a lot of is based on an incident in 1996 during the Algerian Civil War. Starring Lambert Wilson, Michael Lonsdale, Olivier Rabourdin, and Philippe Laudenbach. Des hommes et des dieux is an extraordinary and compelling drama from Xavier Beauvois.

Living above a small village in Algeria are a group of Trappist monks who are seen as men people can count on. Led by their elected leader Christian (Lambert Wilson), the eight men live a life of solitude where they grow crops, do their usual service, and help out the village where Luc (Michael Lonsdale) is the monks’ beloved doctor. When news of a civil war breaking out where they learn that a Croatian man was killed, the Algerian government wants to offer protection to the monks. Christian refuses in order to maintain their routine despite a tense visit from the opposing group of fundamental terrorists led by Ali Fayattia (Farid Larbi) who demands some supplies only for Christian to refuse since it’s Christmas.

Though Christian was able to get Ali and his men away for a while, the rest remain unsure if they can hold off these men as Christian still has to deal with the government and its army as the monks try to do whatever they can for the village. Still, frustration starts to ensue as a few want to leave for safety but Christian wants to stay for the village as they’re counting on these men to protect them. Months go by as a few experience doubt while Luc becomes overwhelmed by his work as Christian gives him a break. With the war intensifying as a visit from the Algerian army only made things uncomfortable prompting the men to band together. When an old friend in Bruno (Olivier Perrier) decides to return to the monastery, the men await for what would probably as the war starts to reach its peak.

The film is a true story about a group of monks who are trying to live their life of solitude during a tense war where they’re dealing with two opposing sides in this civil war where innocent people are being killed. It is told in a style where it’s more about men just trying to do what is right and maintain their routine as there’s not of dialogue present. Instead, it’s more about the routine these men do in service of the people they care for. The screenplay that Xavier Beauvois and Etienne Comar create is an exploration of men trying to hold on to their faith in the threat of war. Leading all of this is a man named Christian who is just trying to do what is right for his community and his monks though he would admit that he’s unsure if he is doing the right thing. A lot of the men in the monastery are middle-aged while two of them in Luc and Amedee (Jacques Herlin) are old men. Yet, they’re all playing a role for God as they’re also men who are willing to talk to the people in the village without wearing their robes and just talk as men.

Beauvois’ direction is very mesmerizing for the way he creates the film that relies more on what these men are trying to day-by-day rather than go into a lot of conventional ideas to move the drama forward. The film starts with a quote from the Book of Psalms that reveals who these men are as they’re just trying to be equal to those they help and those they’re trying to deal with. Shot on location in Morocco, Beauvois’ direction is truly engaging for the wide depth of field shots he creates for many exterior settings while maintaining an intimacy in the meetings that these men are having. There’s some amazing scenes such as a helicopter flying above the monastery where the men try to counter the noise with their chanting to establish their defiance against the forces that want them to leave.

Since this is a film that relies more on what these characters are dealing with, the lack of plot does allow the audience to get to know these individuals as who they are. There is no music score heard in the film except for a climatic dinner where Tchaikovsky’s Swan Lake overture is played where the camera focuses on these men and their reaction to the music. It’s all about this moment where it could be the last time they all eat in peace. The overall work that Beauvois creates is a gripping yet intoxicating drama that explores a group of men who are trying to hold on to their faith in the face of war.

Cinematographer Caroline Champetier does brilliant work with the film‘s gorgeous cinematography from the way the Moroccan mountains and hills are shot in the evening through some of the daytime exteriors for its sunny and rainy days to play out the peaceful work the characters live in. Editor Marie-Julie Maille does superb work with the editing to maintain a very straightforward approach to its cutting while maintaining a leisured pace for the film. Production designer Michel Barthelemy and art director Yann Megard do excellent work with the art direction for the look of the villages as well as the monastery that plays to the world these men live in. Sound editor Loic Prian does incredible work with the sound from the intimacy of the chants in the room to the raucous clash of sounds in the helicopter vs. chants scene.

The casting by Brigitte Moidon is phenomenal for the ensemble that is created as it includes notable small performances from Farid Larbi as the terrorist leader, Olivier Perrier as a returning monk named Bruno late in the film, and the trio of Abdelhafid Metalsi, Sabrina Ouazani, and Abdallah Moundy as local villagers who are close with the monks. For the roles of the eight monks, there are amazing performances from Jacques Herlin as the elderly Amedee, Olivier Rabourdin as the very confused Christophe, Philippe Laudenbach as the anxious Celestin, Loic Pinoch as the determined but scared Jean-Pierre, Xavier Maly as the calm Michel, and Jean-Marie Frin as the low-key but loyal Paul. Michael Lonsdale is great as the asthmatic but determined Luc who is the monks’ head doctor as he’s concerned with doing his job and help the people. Finally, there’s Lambert Wilson in a marvelous performance as the monks’ leader Christian who is trying to do everything he can to help everyone while trying to see what he feels is right for his monastery in this tense time.

Des hommes et des dieux is a powerful yet captivating drama from Xavier Beauvois. Featuring a great ensemble cast led by Lambert Wilson and Michael Lonsdale, it’s a film that serves as a great testament of how faith can defy such awful forces like war without trying to give out some message. It’s also a film that is very human for the way it humanizes the monks as just men who are just doing a deed for God. In the end, Des hommes et des dieux is a mesmerizing film from Xavier Beauvois.

Such a simple but powerful picture, that scene of their last meal together is one of the most emotional moments I have ever seen; and the cinematography is perfect too, can't wait to see Champetier's work on Leos Carax' new film HOLY MOTORS.

That last dinner is really the highlight of the film for me. It didn't really need anything other than close-ups of these faces and music. It's truly one of the best scenes I've seen in film.