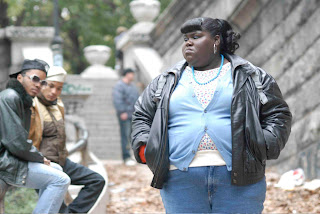 Based on the novel Push by Sapphire, Precious is the story of 16-year old obese and illiterate young woman who is dealing with her sudden pregnancy and the abuse of her mother. When she seeks help to go to a different school and find a new life, she also deals with some of the harsh realities of her circumstances. Directed by Lee Daniels and screenplay by Geoffrey S. Fletcher, the film is an exploration into the troubled life of a young woman and her abusive mother. Starring Gabourey Sidibe, Mo’Nique, Mariah Carey, Paula Patton, Lenny Kravitz, and Sherri Shepherd. Precious is a harrowing yet truly powerful film from Lee Daniels.

Claireece “Precious” Jones (Gabourey Sidibe) is a 16-year old girl who lives in Harlem with her abusive mother Mary (Mo’Nique) as she is pregnant with a second child and is struggling to do well in school due to illiteracy. When the school’s principal learns of Precious’ pregnancy, she decides to have her move to an alternative school where Precious goes to a small class taught by the very kind Blu Rain (Paula Patton) who helps Precious improve on her reading. Despite having a safer environment at Rain’s classes, Precious still has to deal with issues at home where she also has another child named Mongo (Quishay Powell) who is suffering from Down’s Syndrome as Precious reluctantly goes to a social worker named Ms. Weiss (Mariah Carey) for more welfare only to reveal things about her home life.

When Precious goes into labor and gains a second child in Abdul, Precious tries to figure out what to do as she is surrounded by her classmates, Rain, and a nurse aide named John McFadden (Lenny Kravitz) who visit her and the baby. When Precious returns home to her mother, the result becomes bad forcing her to flee home and seek shelter in the home of Rain and her classmates. Despite finding a sense of security for her son, Precious later receives a visit from her mother with some startling news about her father that puts Precious into a state of shock about herself. With the help of Rain and her classmates, Precious decides to forge ahead to create a new life for herself and her children. Still, Precious has to deal with her mother as Ms. Weiss helps to mediate in which horrible revelations are revealed about Precious’ mother.

The film is an exploration of the life of a young 16-year old obese girl who is trying to find hope in her dreary life. Yet, she is also someone who often fantasizes about having a great life and feel loved by various people. Still, she has to contend with the abuse of her mother who often berates her for not bringing any welfare checks or to cook properly making this young girl feel awful about herself. Then comes the chance to attend an alternative school where Precious would meet classmates who are just as complicated and troubled as she is as they become a family of sorts led by this very sympathetic teacher. It would give Precious hope despite having to deal with her mother whom she wonders why this woman despises her?

Screenwriter Geoffrey S. Fletcher does a brilliant job in exploring the life of this young girl living in late-1980s Harlem as she is just trying to live this dreary life despite all of the awful circumstances she’s dealing with. The narrative is told from her perspective as her narration reveals a lot of what she’s feeling and the thing she fantasizes about. Notably as she is someone who wants to be beautiful like some of the white women she sees as there’s a scene where she looks at herself in the mirror as a white woman. It adds to the complexity of who Precious is while Fletcher also creates interesting characters in people like Blu Rain, Ms. Weiss, and some of the classmates that Precious has.

Then there’s the character of Mary who is probably just as interesting as some of the supporting characters. Throughout the story, Precious wonders what happened to her mother as she looks at pictures of Mary in earlier years. While Mary would put on a nice face in dealing with social workers, she would turn into this very monstrous woman who really despises her daughter and would abuse her in all sorts of ways for not getting what she wants or needs. The source of this hatred is eventually revealed but in one of the most devastating moments where she gains pity but it doesn’t make less of the monster that she is though she is human.

Lee Daniels’ direction is truly stylish for the way he plays out the fantasy scenes but also for the way he captures the realism of Precious’ dreary world. While the bulk of the film revels more in realism where Daniels shoots the film in a loose, hand-held style. It is to have the audience see what is going on where he knows something could go bad while he’s also interested to see how Precious would interact with people who are just as troubled including those who have a heart to help her. Daniels knows how to make create suspense but it’s the aftermath where it’s all about the emotion of these characters. For Precious, she would go back to these fantasies where the look is more stylized as if they’re videos but they would often clash with these harsh realities.

Part of Daniels’ uniqueness to fuse reality and fiction are scenes such as Precious looking at herself in the mirror where she sees herself as a beautiful white woman. Another is when she and her mother are watching Vittorio de Sica’s Two Women where Precious imagines herself and her mother in that scene repeating the same dialogue they had previously spoken but in a calm Italian setting. It’s among one of the film’s major highlights as is the calm intensity in the scenes between Precious and Mary including their climatic meeting at Ms. Weiss’ office. There’s melodrama in some of these emotional scenes including that meeting but Daniels knows when not to go overboard as he pulls out the right punches to find something the audience can connect with. Overall, Daniels creates a very tough yet heart-wrenching drama that explores a young girl’s journey to find hope in her dreary world.

Cinematographers Andrew Dunn and Darren Lew do excellent work with the film‘s very stylized cinematography from some of the lush colorful shading of the scenes in Rain‘s classroom to the hyper-stylized fantasy scenes with its array of colors and lights. Editor Joe Klotz does amazing work with the editing to play out the drama that occurs through some chilling montages and stylized cuts ranging from jump-cuts to dissolves to establish Precious‘ struggle. Production designer Roshelle Berliner, along with art director Matteo De Cosmo and set decorators Kelley Burney and Paul Weathered, does nice work with the set pieces created such as the apartment that Precious and Mary lives in to the small but peaceful classroom Rain has to teach her students.

Costume designer Marina Draghici does very good work with the costumes where a lot of it is casual in tune with the late 80s while there‘s more stylish clothing for the fantasy scenes. Visual effects supervisor Dan Schrecker does superb work with the visual effects to create transitions from the fantasy scenes to reality as well as few pieces such as a dream sequence filled with numerous historical pieces that surrounds Precious. Sound editor Robert Hein does a fantastic job with the sound to capture the tense atmosphere of the apartment scenes as well as the raucous world of Harlem.

The film’s score by Mario Grigorov is quite good for its low-key score to play out the drama with small orchestral flourishes. Yet the film’s music is dominated largely by its R&B-inspired soundtrack. Assembled by music supervisor Lynn Fainchtein, the soundtrack includes music by Robin Thicke, Bobby Brown, LaBelle, Mary J. Blige, Queen Latifah, Nona Hendryx, and some gospel pieces by Mahalia Jackson and Donna Allen that truly captures the spirit of the film.

The casting by Billy Hopkins and Jessica Kelly is phenomenal for the ensemble that is created as it features small but notable performances from Sherri Shepherd as the school receptionist Cornrows, Grace Hightower as a social worker who visits Precious and Mary in a flashback scene, Bill Sage as a math teacher Precious adores early in the film, Quishay Powell as Precious’ Downs Syndrome-affected daughter Mongo, and Lenny Kravitz as the kind and humorous nurse aide John McFadden. In the roles of Precious’ classmates, there’s Amina Robinson as the low-key Jermaine, Chyna Lane as the flamboyant Rhonda, Stephanie Andujar as the mouthy Rita, Angelic Zambrana as shy Consuelo, and Xosha Roquemore as calm Jamaican Jo Ann as they all give very memorable and lively performances.

Mariah Carey is excellent in a small role as the social worker Ms. Weiss who tries to help Precious with her situation while Paula Patton is great as the very sympathetic teacher Blu Rain who shows Precious a life that can be good. Mo’Nique gives a truly magnificent as the monstrous Mary where Mo’Nique displays a fierce sense of intimidation to a character that is full of resentment and anger while also displaying a bit of warmth in the fantasy scenes plus sadness in the film’s climatic meeting with Ms. Weiss. Finally, there’s Gabourery Sidibe in marvelous performance as the titular character where Sidibe provides a sense of realism to a character lost in a dreary, abusive world. The fantasy scenes including some of the realistic scenes show Sidibe in places where she seems relaxed and full of life while also someone who seems lost in the world where she is unsure how to vent her anger. It’s a truly remarkable debut performance for the newcomer as Sidibe rises to the occasion and more.

Precious is an extraordinary although very grim film from Lee Daniels that features towering performances from Gabourey Sidibe and Mo’Nique. It’s a film that is definitely not easy to watch due to its very provocative subject matter and harsh reality. Yet, the film is a story of hope that is quite inspiring to watch for the way a young girl can rise up against abuse. In the end, Precious is a film that truly lives up to its namesake and more that is told in an engaging fashion from Lee Daniels.

I'm glad to see such a positive review of this movie. I think since it won a few Oscars, people have gone the way of bashing it, which I don't really understand, but oh well.

This was my favorite movie of 2009. It simply floors me with its brutality and catharsis. Really good review here.

I was surprised by this as I watched this with very low expectations since I really disliked Lee Daniels' previous film before that in Shadowboxer.

Here, this film worked including that last scene. It's somewhere in the top 20-25 films of 2009 but I don't understand the negative reviews it got as I think it's a very uplifting story in some ways.

Completely agree. And yeah, Shadowboxer was a piece of shit.

Hey, any luck on that DropBox upload?

@Alex-it's coming in a few hours. I apologize for the slow upload.

My wireless provider is a piece of shit so I'm on Ethernet for the time being.

Hey no worries about the time man, got it last night... can't thank you enough! Gonna give it a watch this weekend.

It's a film that made me really sad. And it doesn't happen often. I didn't like it as much as you did but I still consider it a great picture. I'm glad that you liked the whole cast because some people had a problem with Mariah Carey's performance. I, for one, think she was amazing. Really surprised me.