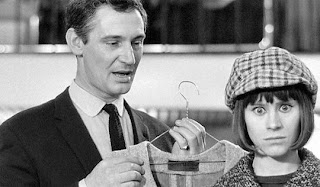 Based on Ann Jellicoe’s play, The Knack… and How to Get It is the story of three different men who compete against each other for the affections of a young woman who has arrived into London. Directed by Richard Lester and screenplay by Charles Wood, the film is an exploration into the burgeoning world of Swingin’ London during the mid-1960s where new rules emerged. Starring Michael Crawford, Ray Brooks, Donal Donnelly, and Rita Tushingham. The Knack… and How to Get It is a fun and whimsical comedy from Richard Lester.

Frustrated by his flat mate in the cool womanizer Tolen (Ray Brooks), school teacher Colin (Michael Crawford) is having a hard time dealing with Tolen’s gift to wooing women as he’s surrounded by lots of them. Wanting to find out how Tolen charms his ways, he follows Tolen around to see how he wins them over while he’s also searching for another flat mate. Meanwhile, a young woman from the country named Nancy (Rita Tushingham) arrives looking for the WYCA to live in as she is fascinated by London’s new world of style and sexual innuendos. Answering to Colin’s sign at the building is an eccentric artist named Tom (Donal Donnelly) as he helps Colin try to outdo Tolen by getting a new bed. At the junk yard, they meet Nancy who is still looking for the WYCA as they take her home with Colin’s new bed where she meets Tolen who would try to win her over as three men eventually fight each other for her affections.

The film is essentially a story of three different men who meet a woman from the country where she becomes an object of affection for these men in a world where things are definitely changing. The screenplay by Charles Wood is very offbeat for the way the humor is presented and how a character like Colin tries to learn from someone as cool like Tolen. Yet, Tolen isn’t a totally cool dude for the way he things women should be treated such as the way he tries to win over Nancy who is confused by his charms. Colin is just a teacher who is socially-awkward with women and doesn’t know what to do until he sort of gets a chance when he meets Nancy. Then there’s Tom who is just an artist that likes the color white that he paints walls and such in that color to brighten things up as he’s much friendlier and helpful to someone like Colin while being less threatening to Nancy.

While the film focuses on the adventures of these four young people, it is also told from people who are watching them as they serve as a Greek chorus where they are wondering what is going on around them. They would often be in shock by these strange behaviors as they voice out the idea of a world gone mad. It’s to contrast the people of the old guard clashing with this new emergence of what would become Swingin’ London.

Richard Lester’s direction is really off-the-wall in the way he presents the film where it’s obvious he’s taking cues from the French New Waves as if he’s making a film with no rules. Notably shooting on exact locations around London where he is definitely at the center of a world where it’s about the youth going wild and having fun. It is a film about this new world where it’s opening credits scene involves a camera following a group of women wearing white sweaters, short skirts, unique eye makeup, and sporting different hair styles of the time all standing around this flat where Colin tries to get out and has no idea what to do as they’re all there to meet Tolen. The opening scene would establish not just these two characters but also this new world that is happening around them where one of them has embraced it while the other feels out of sorts with it.

The film features lots whimsical elements such as Nancy entering a clothing store where a man repeats words about what to wear as if she’ll look great as she will later repeat them to reveal how manipulative he is. It’s the section of Nancy trying to navigate through this new London that is very interesting where she meets Colin and Tom, they go into this adventure that is in tune with Lester’s quirky sense of humor. Lester’s compositions of these scenes and the meeting where all four characters are in a room together where Tolen tries to maintain his role as womanizer is among some of the most visually-entrancing moments of the film. From the way he displays close-ups to the wide shots he creates to have all of his characters in a frame. Overall, Lester creates a dazzling and very entertaining comedy.

Cinematographer David Watkins does fantastic work with the film‘s black-and-white cinematography to capture the gorgeous exteriors of the London locations as well the bright look of Tom‘s room that he painted all by himself. Editor Antony Gibbs does an amazing job with the film‘s very stylish editing with swift fast cuts to play out the rhythm of the conversations as well as rhythmic jump-cuts to play with some of the film‘s humor. Art director Assheton Gorton does wonderful work with the set pieces such as the bed and Tom‘s room that is the epitome of style while Colin‘s room is an ordinary set to represent who he is.

The costume design work of Jocelyn Rickards is superb for the way the men look to represent their characters as well as the clothes that Nancy wears that is very different from the more sexualized look that many of the young women wear in London. Hair stylist Betty Sherriff and makeup stylist Freddie Williamson do excellent work with the look of the female characters from the cool hairstyles the women wear and the eye makeup they have to represent the 1960s at its best. Sound editor Don Challis does terrific work with the sound to play the atmosphere of the flat as well the locations the characters encounter. The film’s score by John Barry is a major highlight of the film for its jazzy score that is filled with orchestral flourishes and unique jazz rhythms that includes a fun organ accompaniment from Alan Haven to play up the film’s unique humor.

The casting by Paul Lee Lander is extraordinary for the ensemble that is created as it features early appearances from such beauties like Charlotte Rampling as a water skier, Jacqueline Bisset as an extra, Jane Birkin as a woman in a motorbike, and Pattie Boyd (the future first wife of George Harrison) as a model in the opening scene who sprays perfume on her leg. Other notable small roles include William Dexter as a conniving clothes shop owner, Margot Thomas as a female teacher Colin is amazed by her, and Timothy Bateson as a junkyard owner. Donal Donnelly is superb as the low-key yet very funny Tom who likes to share his views on the world while being much friendlier to Colin and Nancy while dealing with Tolen in his own way. Ray Brooks is great as the very cool yet somewhat-uncaring Tolen who likes to have his way with women as he thinks of Nancy as a challenge.

Michael Crawford is brilliant as the very awkward and agitated Colin who is having a hard time trying to score with women while finding someone who seems to like him in Nancy. Finally, there’s Rita Tushingham in a marvelous performance as Nancy Jones. Tushingham displays a great sense of wonderment to a woman who is entranced by her new surroundings as she’s trying to find a place while proving herself to be a great comic force in the film’s third act.

The Knack… and How to Get It is a charming and extremely enjoyable comedy from Richard Lester. With an outstanding cast led by Rita Tushingham and Michael Crawford as well as very catchy score from John Barry. The film is definitely one of the key great films of the British New Wave era of the 1960s. The film is also one of Lester’s great films, outside his more well-known work with the Beatles, as it emphasizes the kind of humor he creates that is in tune with what was happening in the 1960s. In the end, The Knack… and How to Get It is a glorious comedy from Richard Lester.

Thank your for your thorough and articulate review! I just finished watching the film and was looking to hear someone else's thoughts and found you through the IMDb link.

What did you think of the "rape" aspect, where Rita Tushingham is endlessly repeating the word (to comic effect)? It clearly meant the same thing then as it does now, as she is using it as a threat, but it's also difficult to hear that word used lightly nowadays, and to hear it used in such a whimsical manner was unusual, to say the least. Just curious as to how it went down for you.

@Dr. AC, Fool for Blood-I think when someone claims rape, it goes overboard. I can understand what happened if someone was raped but nowadays. It's gotten out of control as with a lot of things relating to political correctness.