Originally Written and Posted at Epinions.com on 11/27/07 w/ Additional Edits. 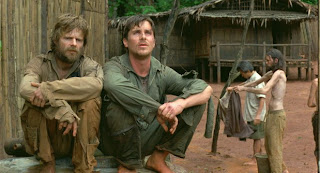 Based on a true story about Dieter Dengler's escape from a Laos prison during the Vietnam War, Rescue Dawn is a dramatic version of a story that German filmmaker Werner Herzog made back in 1997 in a documentary entitled Little Dieter Needs to Fly about Dengler and his escape. Playing the role of Dieter Dengler is Christian Bale. Also starring Steve Zahn and Jeremy Davies. Rescue Dawn is a thrilling yet engrossing film from Werner Herzog.

It's 1965 at the Gulf of Tonkin as Dieter Dengler and a few pilots are to take part in a classified mission to bomb a secret bases in Laos. For Dieter, it's his first mission as a flight lieutenant as the German-born man has dreamed of flying ever since seeing planes bombing his German village up above back in World War II when he was a child. Just as he arrived into Laos for the bombing, Dieter's plane is suddenly hit and crashes as he wanders around into the jungle. Trying to evade Vietcong troops and Laotian farmers, Dieter eventually gets captured as he endures a series of tortures and such. After being interrogated, Dieter refuses to sign a document that would've guaranteed his freedom as he's sent into a prison in the middle of the jungle.

He meets six prisoners from Air America that included Duane Martin (Steve Zahn), Eugene DeBruin (Jeremy Davies) and four Thai prisoners. After enduring months of imprisonment, Dieter plans an escape but Duane and Eugene tell him that outside the prison is the jungle that's a prison in itself. Despite the harsh times he stayed in the prison, he befriends Duane while making his plans slowly to try and escape. Finally, with the rain season starting to come, Dieter and his fellow prisoners prepare for their escape as they immediately succeed. With Eugene and the Thai prisoners splitting up to escape, Dieter and Duane make their way to the treacherous jungle as they battle a physical, mental, and emotional journey against the harsh world of nature. Yet, Dieter's optimism would be the catalyst for the journey as he hopes to come home.

While most films about the Vietnam War were often filled with grim themes and subject matters that were always cynical. A film like Rescue Dawn proved to be different since it's the story of an individual and his experience as a prisoner-of-war and his escape. For Werner Herzog, it's not a war film but a tribute to a friend whom he profiled back in 1997 for the documentary Little Dieter Needs to Fly. While he made dramatic changes for the story, Herzog is really paying tribute to a man whose lack of views about the war is overshadowed by his innocence and optimism that is rarely seen in a lot of war films.

The script by Herzog is told very simply with the first act being about Dieter's plane crash and his journey to prison with the second act being about his imprisonment and eventual escape. The third act is really about Dieter and Duane escaping through the treacherous jungle that becomes a part of Herzog's continuing theme of man vs. nature. While some audiences, particularly Herzog's more art-house film crowd, might complain about the film's ending which was dramatized. The ending works in ways for Herzog to pay tribute to Dengler, who died in 2001, by celebrating him as this great man whose optimism proved to be inspirational. Particularly in a war like the Vietnam War that was always filled with cynicism and unpopular.

The film isn't about the Vietnam War but a man maintaining this sense of optimism and hope in a moment that is harsh and cruel. Through his direction, Herzog goes deep into the jungles of Thailand and all of its landscape including treacherous rivers filled with snakes and such. Still, Herzog is willing to walk into the snake-infested rivers that are also filled with leeches to tell the story. More importantly, Herzog like his main actors was willing to shed pounds for the project in order to gain their trust. Through his observant camera and unconventional style, the film has a bit of cinema verite in conveying the action and drama of the film as if he makes it up along the way just for the story. Overall, Werner Herzog's work in both the writing and directing is his strongest feature-film work to date since 1982's Fitzcarraldo with Klaus Kinski.

Cinematographer Peter Zeitlinger does some amazing, evocative camera work to convey the beauty of the Thailand jungle with little style for a more documentary-like feel that is beautiful. Zeitlinger also uses a lot of hand-held camera for the action and dramatic sequences to maintain the verite style as he and his camera operator would go deep into the rivers and in the rain for the action of what is to come. Editor Joe Bini is superb for its meditative, elliptical style, even in the film's second act to convey the sense of boredom that goes on while a lot of the cutting in the film's plane crash in the first act doesn't fall into traditional, action-film style edits. Bini also uses stock footage from the original Laos bombing to open the film that works to convey when the film is taking place.

Art director Arin "Aoi" Pinijvararak and set decorator Peter Mayer do great work in creating the bamboo prison that Dengler and his fellow prisoners were staying including the houses and such. Costume designer Annie Dunn does great work in creating the look of fighter-pilot clothing as well as their decayed look throughout the entire film. Sound editor Peter Austin does some great work for the film's sound to convey the sense of violence in some scenes as well as the atmosphere of the jungle throughout the film. Music composer Klaus Badelt brings a contemplative, subtle score led by piano to convey the film’s drama without any kind of dramatic arrangements and such for the entire film until the end as Badlet's score is very memorable through and through.

The film's cast is wonderfully assembled with Abhijati "Meuk" Jusakul and Lek Chaiyan Chunsuttiwat as Dengler's fellow Thai prisoners, Francois Chau as the interrogator before Dengler's sent to prison, and as the prison guards, Teerawat Mulvilai, Mr. Yuttana Muenwaja, Mr. Kriangsak Ming-olo, and Somkuan "Kuan" Siroon as the quirky yet violent guards who each have a distinctive personality. Other notable small performances from GQ, Pat Healy, and Toby Huss are great as Dengler's fellow pilots while character actors Zach Grenier and Marshall Bell play Dengler's superiors. Jeremy Davies gives a phenomenal performance as the creepy yet cautious Eugene DeBruin who is hoping for the Americans to save him while not wanting to risk himself into the jungle. Davies' performance is superb for being a cynical, antagonist-of-sorts to Bale's unwavering optimism.

Steve Zahn delivers what has to be one of his best performances to date as Duane Martin. Zahn, known to many for his comedic performances, does bring a bit of humor to his character but his range as a dramatic actor is indeed a revelation. Notably for a man who no longer could take his imprisonment and becomes Dengler's friend in this horrific experience as Zahn captures his despair in the jungles as represents the struggles that soldiers go through as prisoners-of-war. Christian Bale delivers another solid performance that is no doubt inspiring as the late Dieter Dengler. While sporting a North American accent instead of a heavy, German-American accent, Bale proves his range as an innocent, optimistic fighter pilot who isn't wanting to give up. Bale, who is often criticized for his lack of humor, brings some humor to the character while his eerie performance as well as his look shows that he's an actor willing to take risks into any character he plays. It's a performance that will hopefully, won’t be overlooked by the end of the year.

Rescue Dawn is a sobering yet inspiring from Werner Herzog helmed by Christian Bale's exhilarating performance. With a great supporting cast, haunting imagery and locations, it's a film that fans of Herzog will enjoy. While the film would make a great companion piece to Herzog's 1997 documentary Little Dieter Needs to Fly. While it doesn't come close to Herzog's other feature-film classics like Aguirre, the Wrath of God or Fitzcarraldo, Rescue Dawn proves to an unforgettable film that shows that even through dark times and the treacherous jungles that there is hope. For a film that is inspiring and filled with hope, Rescue Dawn is the film to go see.

Documentaries: (The Flying Doctors of East Africa) - (Handicapped Future) - (Land of Silence and Darkness) - (The Great Ecstasy of Woodcarver Steiner) - (How Much Wood Would a Woodchuck Chuck) - (La Soufrière) - (Huie's Sermon) - (God's Angry Man) - (Ballad of the Little Soldier) - (The Dark Glow of the Mountains) - (Wodaabe – Herdsmen of the Sun) - (Echoes from a Somber Empire) - (Jag Mandir) - (Bells from the Deep) - (The Transformation of the World into Music) - (Death for Five Voices) - (Little Dieter Needs to Fly) - My Best Fiend - - (Wings of Hope) - (Pilgrimage) - (Ten Thousand Years Older) - (Wheel of Time) - (The White Diamond) - Grizzly Man - Encounters at the End of the World - Cave of Forgotten Dreams - (Into the Abyss) - (On Death Row) - From One Second to the Next

Lovely review. I agree Rescue Dawn isn’t about Vietnam, it’s about maintaining hope through hell. I’ve shown this film a handful of times to people, and it is always proceeded with a showing of Little Dieter , which is one of my favorite Herzog docs.

I still think Rescue Dawn contains Bale’s best screen performance. Many would disagree though. You?

I probably would say The Machinist is Bale's best performance but this film is one of his essential performances.

Great review, I've had this on my list for a long time. It's being remade, isn't it? that's what I heard anyway.

@Diana-I don't think I heard about a remake happening. And why?

Plus, this is really just a dramatic version of a documentary that Herzog made nine years before that called Little Dieter Wants to Fly.

Great review! I really liked the film, though it was a bit difficult to watch at times. Bale delivered one of his best performances here.

@Sati-Thanks. If there's a list of Essential Christian Bale performances. This would be in the top 5.