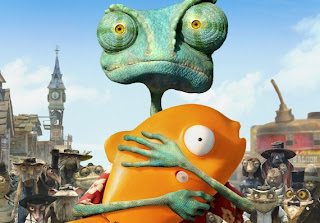 Directed by Gore Verbinski and screenplay by John Logan from a story by Verbinski, Logan, and James Ward Byrkit, Rango is about a pet chameleon who finds himself in a desert town where he becomes an unlikely sheriff to fight off villains. The animated film is a modern-day approach to the western as it features various film references while making it accessible for a wider audience. With a voice cast led by Johnny Depp, Isla Fisher, Abigail Breslin, Ned Beatty, Alfred Molina, Bill Nighy, Harry Dean Stanton, Ray Winstone, and Timothy Olyphant. Rango is a stylish and very entertaining animated-western from Gore Verbinski.

An unnamed pet chameleon (Johnny Depp) gets stranded somewhere in the middle of the desert where he meets a wounded armadillo named Roadkill (Alfred Molina) who is trying to find the mysterious Spirit of the West. With the chameleon trying to survive the hot desert and its surroundings, he meets up with a desert iguana named Bean (Isla Fisher) who is a rancher’s daughter trying to save her land. She takes the chameleon to a town called Dirt as the locals are trying to deal with a water shortage where the chameleon ends up calling himself Rango where he deals with a small posse led by Bad Bill (Ray Winstone) and later a hawk whom he accidentally kills. Rango’s antics impress the town’s mayor (Ned Beatty) who appoints him as sheriff as Rango’s claims of his adventures has him trying to figure out the water shortage.

Rango gathers a posse that includes Bean to figure out what’s going on as the water jug bank had been stolen by a group of moles led by Balthazar (Harry Dean Stanton). During the journey, Rango and the posse makes some discovery as they retrieve the jug only to realize something is up where Balthazar isn’t the one they’re after. Rango suspects that the mayor is involved since he states that he who controls the water controls everything where Rango is forced to deal with a vicious gunslinger named Rattlesnake Jake (Bill Nighy). After revealing what he really is, Rango reluctantly leaves town until he meets the mystical Spirit of the West (Timothy Olyphant) who provides him with the answers Rango needs.

The film is essentially a modern-day genre-bending film where a pet chameleon, with a wild sense of imagination, suddenly finds himself in a Western town where he faces a world of corruption where a bunch of locals are finding hope in this horrible drought. That’s pretty much what the film is about as it’s filled with numerous film references including the classic westerns of Sergio Leone and Roman Polanski’s Chinatown in relation to the drought storyline. Screenwriter John Logan does manage to infuse these storylines and film references to create a very compelling yet fun western that is filled with lots of silly humor and character development. Notably for the titular character who is just a lizard that likes to act as indicated in the opening scene while he realizes that he might have to go full-on with this role.

While the script is sort of predictable in its set-up and creating characters that are essentially archetypes of various characters in the western genre. They all manage to still be very interesting and engaging while Logan also adds surreal elements that play up with the genre. Overall, Logan creates a very crafty and thrilling script that doesn’t get boring and create a western that does a lot for what is expected in its genre.

Gore Verbinski’s direction is definitely full of style as he creates lots of wide compositions, character close-ups and scenery where some of it is really a tribute to the visual style of Sergio Leone. The animation from supervisor Hal T. Hickel is truly whimsical in the way Verbinski wants to create this world where it’s a clash between the old world and a new one that the mayor wants. With additional help from renowned cinematographer Roger Deakins for the visuals, Verbinski is able to create a look that is true to the western but also dream-like for some of its nighttime scenes. Overall, Verbinski creates a truly engaging and visually-astonishing film that brings more to what an animated-western does and make it a whole lot of fun.

Editor Craig Wood does superb work with the editing to play up with some of the film‘s humor and suspense along with some amazing rhythmic cuts for a huge chase scene and stylized ones for the showdowns. Production designer Mark “Crash” McCreery, along with art directors John Bell and Aaron McBride, does excellent work in the set pieces created for the town of Dirt where everything looks decayed. Visual effects supervisor John Knoll does fantastic work with the visual effects to play up some of the surreal imagery that Rango encounters in his journey. Sound designer Peter Miller and sound editor Addison Teague do amazing work with the sound to help set a mood for some of the film‘s suspense and in the showdowns that occur.

The film’s score by Hans Zimmer is marvelous for its mixture of bombast and orchestral flourishes that is also very operatic. Notably as the score is very similar to the music of Ennio Morricone with its huge arrangements, twangy guitars, and blaring trumpets to help set the mood. Along with some contributions from Johann Strauss and Richard Wagner to play with the score and contributions from Los Lobos for some of the original songs and the industrial band Lard in the score. The music that Zimmer creates is definitely one of his best as it’s a major highlight of the film.

The voice casting by Denise Chaiman is brilliant for the cast that is assembled as the actors that contribute to smaller characters in the film include Beth Grant, Vincent Kartheiser, Alana Ulbach, Chris Parsons, Blake Clark, Patrika Darbo, director Gore Verbinski, and Stephen Root who voices some of the characters including the bank manager Merrimack. Other notable small voice roles include Timothy Olyphant as the mysterious Spirit of the West, Alfred Molina as the Don Quixote armadillo Roadkill, Abigil Breslin as the witty cactus mouse Priscilla, Ray Winstone as the gila monster Bad Bill, and Harry Dean Stanton as the old-timer mole Balthazar. Bill Nighy is excellent as the cool, Lee Van Cleef-inspired villain Rattlesnake Jake while Ned Beatty is funny in doing a great John Huston impression as the town’s corrupt mayor. Isla Fisher is wonderful as the cunning desert Iguana Beans who tries to fight for her land while helping Rango out. Finally, there’s Johnny Depp in a fantastic performance as the titular character as he brings a lot of humor and swagger to his character making it one of the most enjoyable animated characters on film.

Rango is an extraordinarily rich and whimsical animated film from Gore Verbinski. Thanks to a very talented voice cast led by Johnny Depp, the film is truly an animated film that appeals more than just a young audience. Notably as it features numerous film references that film buffs can enjoy and elements of the western that western aficionados can love. In the end, Rango is a superb animated-western from Gore Verbinski.

This movie definitely thinks that it's a lot funnier than it actually is but I have to say that it did have me laughing more than I expected. Also, that Olyphant cameo was just so frickin' awesome, how could you not dig it? Good review Steve.

I liked this film, but didn't love it. I think like most movie people I enjoyed the references to classic films. One thing I couldn't get by is that the plot is quite similar to Aardman's earlier animated film Flushed Away, with Rango a western and the former being Bond/Mad Max.

@Dan-I was geeking out throughout the entirety of the film. It was funny and I just got into it because it's a western. And a Leone-inspired western since he is one of my all-time favorite filmmakers.

@Chip-I didn't really think of that as I have seen Flushed Away which I thought was a good film but not as good as this one.