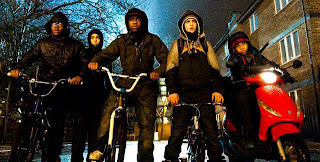 I was entertained by this film, but I think you liked it more than I did. Other reviews have also liked it quite a bit, so I am probably in the minority on this.

My biggest complaint is that I found most of the kids annoying, especially the white wannabe rasta.

On the other hand, I think the lead in the film has a young Denzel Washington thing going on.

I agree about John Boyega. Dude looks like he could be a star. He's got the look and charisma. I think we'll be seeing more of him. He's awesome.

Yea I hope John Boyega is going to be able to build up on this. He definitely was the most charismatic of the bunch despite having a pretty understated role/acting style.

@Castor-He was the character that I ended up rooting for despite the fact that he is a criminal. Yet, he allowed his character to redeem himself and be a badass. I'm eager to see what Boyega does next.