Originally Written and Posted at Epinions.com on 12/11/06/ w/ Additional Edits. 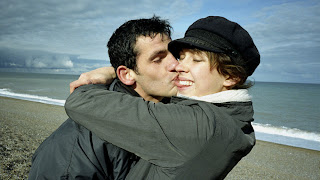 Directed by Michael Winterbottom, 9 Songs is a half-concert film, half-love story about a young British climatologist and a young American exchange student having a passionate affair in London amidst the rock scene that's going on in London. Taking a cinema verite approach to the concert footage and the dramatic story, the film is told unscripted and an improvisational take. Starring Kieran O'Brien and Margo Stiley. 9 Songs is an intense, thrilling erotic-concert film that blurs the genres from the often unpredictable Michael Winterbottom.

Taking a trip to Antarctica, Matt (Kieran O'Brien) reflects on an affair he had with an American exchange student named Lisa (Margo Stiley) he met several months ago at the Brixton Academy where they both saw the Black Rebel Motorcycle Club. Immediately, an attraction develops both emotionally and sexually as she often lived in his British apartment where they would go see several shows by the Von Bondies, Elbow, Primal Scream, the Dandy Warhols, Super Furry Animals, Franz Ferdinand, and Michael Nyman. Despite they're dysfunctions, Matt and Lisa are deeply in love as they engage in many sexual antics as he shows her what he does as a climatologist while they dabbled in a bit of drugs and other sex games. The relationship becomes intense as they test their own individual passions where they know that it's not going to last despite this amazing experience.

Since the film has a lack of a plot, Winterbottom tells the story in a simple way where it's almost documentary-like to the point where everything feels natural and real. Especially the sex since a lot of the sex is shown explicitly as well as the fact that O'Brien and Stiley are performing unsimulated, uncompromising sex. Though audiences will debate whether the sex is pornographic, Winterbottom chose to tell it in a way where it is a love story of a different kind. The sex isn't really meant to shock but to titillate the audience where it's something that people can relate to in terms of sex. The concert footage is really shown in the way the characters of Matt and Lisa have a passion for not just themselves but for the bands they love. It's really a love story in the simplest of forms that's really more adult as it's wonderfully directed by Winterbottom.

Cinematographer Marcel Zyskind does wonderful hand-held DV camera work to give the film a documentary feel since it's all improvisational and looks real in many of the film's concert hall scenes shot in the Brixton Academy as well as the famous Hammersmith Odeon. Zyskind also brings a natural look to the film's dramatic sequences where it's wonderfully lit. Editor Mat Whitecross and Michael Winterbottom bring a lot of style and jump-cuts to the editing where the film doesn't feel slow or too fast since it's wonderfully paced in its 69-minute running time. Sound recordist Stuart Wilson also does great work in bringing the atmosphere of the concerts as well as the world of Matt and Lisa. Kieran O'Brien and Margo Stiley meanwhile gives excellent performances where the two definitely have chemistry as well as differing personalities in which O'Brien is more laid-back and sensitive while Stiley is more outgoing and adventurous.

The film's soundtrack and performances from the bands are all wonderful while B.R.M.C. are given two performances to complete the 9 songs concept. Other tracks from Michael Nyman, Goldfrapp, Salif Kieta, Franz Ferdinand, and Elbow are also played in he background. The music is exciting and energetic to reveal the passion of the characters.

The Region 1 DVD of 9 Songs in its full, uncut version presents the film in the aspect ratio of 1:85:1 anamorphic widescreen format with 5.1 Dolby Digital and DTS Surround Sound. The special features are varied that includes interviews with director Michael Winterbottom who talked about wanting to do a concert film and a sex drama with a lot of realism. In the end, he admittedly improvised and worked without a script while shooting the sex scenes, he wanted to capture a realism and get the actors comfortable despite the fact that there's Winterbottom, cinematographer Marcel Zyskind, and sound recordist Stuart Wilson in the room while they have sex.

Actors Kieran O'Brien and Margo Stiley are also interviewed individually as O'Brien discusses meeting Winterbottom about the project and how he got prepared for the sex scenes where he and Stiley, prior to filming had to get to know each other. Stiley meanwhile, discussed how she auditioned for the part and how she felt protected by Winterbottom. While interview was the longest at 13-minutes, Stiley revealed her own personality which is different from her character and how she got involved in the creative process as she, O'Brien got to collaborate with Winterbottom.

One big feature that is a bonus for the fans of the bands playing is an un-edited, concert performance-only of all the bands playing their songs. More music bonuses come in the form of some music videos. Two from the Dandy Warhols, one from the Von Bondies, and one from Elbow. A photo gallery showing promotional pictures plus the locations on where the film was shot as well as the film's theatrical trailer which is very sexy along with trailers for Gregg Araki's brilliant Mysterious Skin, the highly-acclaimed Korean film Oldboy, and another independent film called Milwaukee, Minnesota. Overall, the DVD is filled with a lot of stuff fans of sex and rock n' roll can enjoy.

When the film premiered at the Cannes Film Festival with no press, no promotion, and not even in any form of competition, it sparked a huge firestorm. It was considered to be the most sexually-explicit British film ever made and the result gave Winterbottom an international hit. Despite the controversy or because of it, it did give the film a lot of attention and having an audience and press divided over the film. Still, whether certain audiences like explicit sex or not. 9 Songs is still a wonderful achievement from Michael Winterbottom. After all, this is a good movie for those who wants some nice, hardcore sex with some good ol' rock n' roll music.

This seems very interesting, I like the theme and the fact that is based in London- plus, real sex?hmmm... I will be sure to check it out! Thanks for the review!

It's not for everyone. Particularly if you're not into un-simulated explicit sex.

I enjoyed it not because of the premise but also the music as I'm into a lot of these bands, with the exception of Franz Ferdinand whose song "Take Me Out" annoys the hell out of me. It's overplayed to death.

The music was really fantastic in this one, I didn't mind the explicit scenes in fact I think them mixed with the live performances of the band captured something very real here. Great review!

@Sati-It's a unique film. It doesn't try and say more than what needed to be said. It just states what it is plain and simple. Plus, I really enjoyed watching those sex scenes and rocking out to the music.

Being honest, the only reason I watched this movie was to see what all the fuss was about with the sex scenes.

I stayed with the movie for 45 minutes or so, but I eventually lost interest in the two main characters. I found myself fastforwarding to the concert scenes and, yes, the sex scenes.

Are they explicit? Yes. Are they bothersome or controversial to me? No.

@Chip-I watched it because I liked the music in that film and I enjoy watching explicit sex. I'm turned on by explicit sex. I don't think it's that controversial but I enjoyed the hell out of it.