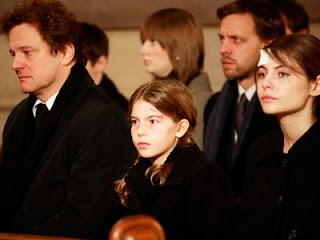 Directed by Michael Winterbottom and written by Winterbottom and Laurence Coriat, Genova is the story of a widowed professor and his two American daughters who move to Italy after the death of their mother. There, they deal with their new surroundings as they all try to come to terms with loss. Starring Colin Firth, Catherine Keener, Willa Holland, Perla Haney-Jardine, and Hope Davis. Genova is a touching yet enchanting drama from Michael Winterbottom.

After the death of his wife Marianne (Hope Davis) from a car accident, Joe (Colin Firth) decides to take a job to teach English literature at a university in Genova, Italy. Taking his two daughters in 16-year old Kelly (Willa Holland) and 10-year old Mary (Perla Haney-Jardine) with him for the entire year, they’re accompanied by Joe’s old college friend Barbara (Catherine Keener) who also teaches at the university. Things aren’t easy as Mary is ravaged with guilt over the accident as Joe has his two daughters take piano lessons from a local teacher. Kelly meanwhile, becomes interested in socializing as she meets a young man named Lorenzo (Alessandro Giuggioli). With Barbara showing Joe and the girls the sites in the town as well as other places as she gets to know Mary who claims to see her mother’s ghost.

When Barbara takes Joe and the girls to a beach that is nearby a monastery, Barbara takes Mary to a place to light candles where Mary suddenly wanders around and gets lost prompting Joe to try and find her. Joe becomes more worried about Mary while Kelly starts to come home late from parties as she starts to rebel and do things behind her father’s back. With Mary still seeing her mother’s ghost, Joe takes an interest in one of his students in Rosa (Margherita Romeo) much to Barbara’s chagrin where he would go out with Rosa on one particular day. With Kelly also out, Mary remains haunted by the visions of her mother prompting her father and sister to realize what has been happening.

The film is about a British professor who decides to try and start over following the death of his wife as he takes his two daughters to the exotic world of Genova. While he takes a job teaching English literature for a summer course in a local university, his two daughter go into very different directions to deal with loss of their mother. For the rebellious teenager Kelly, she ventures into a world of parties and falls for a young man while keeping it secret from her father. For the younger daughter Mary, she tries to find solace in attending spiritual places to light candles as she is surrounded by the ghost of her mother while dealing with the guilt over how her mother died. While an old friend of Joe in Barbara would try and help out, she would start to feel guilty thinking she’s getting too close.

The screenplay that Michael Winterbottom and Laurence Coriat create is an exploration of grief where they emphasize more on following these characters in this new world they’re adapting to rather than play to the conventions of a melodrama. Since the film doesn’t have much of a plot as it wanders around a lot for the characters to figure out how to adapt to this new environment. Yet, there are moments of repetition of what these people do for their surroundings though there’s a break every once in a while from these daily routines. Notably as there’s a few moments where Mary cries in anguish prompting Joe to comfort her as she remains haunted by the events presented early in the film. The characters are definitely flawed because they’re all unsure of how to move on. Though Kelly starts to act out by going home late and become cruel to her younger sister and dad. It’s only because she is at an age where she is trying to find herself but the loss of a maternal figure adds to her confusion.

Winterbottom’s direction is truly engaging in the way he presents the film without trying to make Genova into a world where it’s all about the beaches and luxurious buildings. Instead, Winterbottom avoids the postcard look of the film to go for something more realistic as he takes the camera into these narrow alleys where it’s a place that is very strange and dark. Since it is presented largely in a hand-held digital camera style, Winterbottom makes a film where it is about this new environment and this family trying to start anew. Though the early portions of the film shot partially in Sweden and Chicago, the first scene that involves the accident has Winterbottom create something simpler and then cut to black only using sound to emphasize what is happening.

The presentation of these early scenes are shown with a much tighter and controlled approach to the direction while everything else in Genova is much looser. Though the locations are a bit claustrophobic at times and other locations much more spread-out. There is something to that presentation that is engrossing to watch while the drama that unfolds makes it more entrancing. Notably the scenes where Mary would often see her mother either in her room or at a certain location. The overall work has Winterbottom create a truly mesmerizing film about grief and coping with loss.

Cinematographer Marcel Zyskind does an amazing job with the film‘s very vibrant and colorful digital photography to make the film have a more realistic look as well as maintaining some hypnotic lighting set-up for some of the film‘s interior setting. Editing the film with Michael Winterbottom is Paul Monaghan as the duo create a very stylish approach to the editing utilizing rhythmic cuts to play up some of the drama that unfolds in the film. Production designer Mark Digby does a nice job with the set pieces created such as the apartment Joe and his daughters live in to a few other set pieces in some of the locations in Genova.

Costume designer Celia Yau does a wonderful job with the costumes for the more youthful clothes of Kelly and Mary to complement their differing personalities. Sound designer Joakim Sundstrom does excellent work with the sound to capture raucous atmosphere of the locations including the party scenes and beaches. The film’s music by Melissa Parmenter is superb for its somber yet evocative presentation as it’s mostly low-key with piano pieces while a lot of the film’s soundtrack includes a mix of classical piano sonatas, a score piece by Georges Delerue, and alternative rock cuts from Modest Mouse.

The casting by Wendy Brazington is brilliant for the small ensemble that is created as it includes small appearances from Alessandro Giuggioli as Kelly’s Italian lover Lorenzo, Margherita Romeo as Joe’s Italian student Rosa, and Hope Davis in a very crucial yet ethereal role as Joe’s late wife Marianne. Perla Haney-Jardine is great as the young Mary who seeks some sort of spiritual answer from her late mother as she is filled with guilt for her mother’s death. Willa Holland is excellent as the teenager Kelly who tries to rebel by going to parties and explore her sexuality as a way to act her loss. Catherine Keener is terrific as Joe’s old friend Barbara who helps the family out while trying to understand what Mary is dealing with. Colin Firth is superb as the grieving professor Joe who tries to deal with Mary’s guilt and Kelly’s rebellious nature while wanting to start over as it’s a very touching performance from the British actor.

Genova is a rich and exotic film from Michael Winterbottom featuring top-notch performances from Colin Firth, Catherine Keener, Willa Holland, and Perla Haney-Jardine. The film is definitely one of Winterbottom’s most unconventional yet surprisingly accessible film in terms of its exploration of loss while adding a realistic look to the city of Genova. In the end, Genova is a radiant yet engrossing film from Michael Winterbottom.

I've had this in my Netflix Instant queue for a while, but I've never gotten around to seeing it. Maybe I will now.

Great review! This sounds like a better version of "The Descendants" story, with the wife passing, the father and daughters. Plus I love Colin Firth and Hope Davis.

@Chip-You should. It's actually a much better film in its themes of grief. Plus, it's told in an unconventional manner by Winterbottom.

@Sati-I much prefer The Descendants though this is a very different film. Plus, you can't go wrong with Colin Firth and Hope Davis.