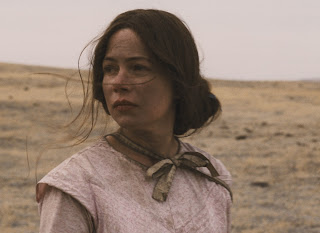 Directed by Kelly Reichardt and written by Jonathan Raymond, Meek’s Cutoff is the story a group of settlers in 1845 traveling across the Oregon trail where they become lost due to their eccentric guide. The film is based on a historical incident that occurred where power struggles become involved its small band of settlers as they try to go through the treacherous trail. Starring Michelle Williams, Bruce Greenwood, Shirley Henderson, Neal Huff, Zoe Kazan, Paul Dano, Tommy Nelson, Rod Rondeaux, and Will Patton. Meek’s Cutoff is an entrancing film from Kelly Reichardt.

A group of settlers are walking on the Oregon trail to reach towards an unknown destination as they’re led by the eccentric Stephen Meek (Bruce Greenwood). With Meek taking them to a shortcut near the Cascade Mountains, the trail goes much longer than it seems raising suspicions in its settlers including Emily Tethrow (Michelle Williams). While her husband Solomon (Will Patton) would often confer with the other men in William White (Neal Huff) and Thomas Gately (Paul Dano) about where Meek could be leading. Emily remains suspicious bringing worry to William’s wife Glory (Shirley Henderson) and Thomas’ wife Millie (Zoe Kazan) along with William and Glory’s son Jimmy (Tommy Nelson).

While sees a lone Indian (Rod Rondeaux) walking around, he’s eventually captured by Meek and Solomon as Emily thinks he can get them to a place where there’s water. Still, troubling encounters with the treacherous land along with suspicions about the Indian lead to more uncertainty about what is ahead.

While the film is loosely based about an incident that revolves around a group of settlers, an eccentric guide, and an Indian who would become part of this journey. It’s all about a journey into the unknown where mistrust and confusion would occur as these settlers find themselves lost. During this journey, an Indian would pop up as he’s captured where one of them starts to trust this Indian instead of this guide who is very ambiguous. Does Stephen Meek really know where good land is or is he just this ignoramus who has no idea what he’s doing?

That’s what screenwriter Jonathan Raymond is trying to figure out as he creates a script that is very unconventional. There’s not much plot to the story as it’s all about these people going walking along into unknown land as they search for water and a place to start somewhere. Yet, Raymond does delve into these themes of anxiety, fear, resentment, and power struggle as it focuses on this group of people dealing with being lost in a land they’re not familiar with. Tension does arise but it’s notable between Meek and Emily where the latter believes that Meek has no idea where he’s going as she starts to trust the one person Meek claims not to trust.

The lack of a conventional script allows director Kelly Reichardt to create a very minimalist yet evocative film that doesn’t need to rely on dialogue. Instead, Reichardt goes for a more methodical yet entrancing approach to the filmmaking to explore this key incident in the history of Oregon. Shooting the film in a 1:37:1 full-frame aspect ratio, Reichardt does allow that format to capture great scenery that is often filled with wonderful wide shots and beautiful locations that is set in Oregon. Since there aren’t a lot of dialogue or any set pieces other than covered wagons with horses, mules, and cows in order to re-create this period. Reichardt gets a chance to improvise and create these scenes where it’s all about a daily routine or moment that occurs where the men and women each have a role to play.

While there’s a lot of long shots of wandering images of these hilly locations with bits of deserts, Reichardt’s approach to the direction is to emphasize on this very tight yet methodical approach to the film. This unconventional approach would allow the film to be paced in a very slow manner as there isn’t a lot of dialogue. It would give Reichardt the chance to play up the uncertainty that these characters face as the drama intensifies in the course of the film while she frames them to see how they interact or how they would hold small meetings. With Reichardt also serving as the film’s editor where she maintains that slow rhythm to play up the suspense and drama that occurs. She creates a film that explores the people in this journey where they would face the unknown as the overall result is a mesmerizing yet harrowing film about a legendary trail.

Cinematographer Chris Blauvet does a brilliant job with the film‘s gorgeous cinematography that features lots of beautiful daytime scenes of the Oregon skylines and locations while a lot of the nighttime scenes are very dark with only available light used to maintain the naturalist tone of the film. Production designer David Doernberg and art director Kat Uhlmansiek do great work in the design of the covered wagons along with various props to create a feel of that period.

Costume designer Victoria Farrell does excellent work with the costumes to create the clothes that men wear along with colorful dresses the women as it would match up with the look of the film‘s different locations. Sound designer Leslie Shatz and sound editor Javier Bennassar do amazing work with the sound to play up the intimate sound of clanging objects and wagon creaks along with the atmosphere that surrounds the different locations in Oregon. Music composer Jeff Grace does a superb job with the music creating an eerie score led by smooth yet screeching strings to play up the ominous tone of the film.

The casting by Laura Rosenthal is outstanding for the ensemble that is created for the film. Notable small roles include Tommy Nelson as the young boy Jimmy, Rod Rondeaux as the mysterious Indian, and Neal Huff as Jimmy’s father/Glory’s husband William. Zoe Kazan is very good as the worried Millie while Paul Dano is terrific as the more determined Thomas. Shirley Henderson is wonderful as the maternal Glory while Will Patton is excellent as Emily’s resourceful yet organized husband Solomon. Bruce Greenwood is great as the eccentric Stephen Meek as Greenwood sports a huge beard and wear strange clothes as he’s a man that is certainly odd while always jabbering about everything he’s encountered. Finally, there’s Michelle Williams in a phenomenal performance as the grounded Emily Tetherow who tries to deal with the uncertainty while proving to be someone who won’t be pushed around as it’s Williams at her best.

Meek’s Cutoff is a ravishing yet engrossing western-drama from Kelly Reichardt that features an incredible performance from Michelle Williams. While it’s a film that will have fans of the western genre be baffled by its unconventional premise and slow pacing. It’s definitely a truly creative film that relies more on minimalist techniques, compelling characters, and beautiful settings. Notably as it provides a very intriguing idea about a very tiny moment in American history. In the end, Meek’s Cutoff is a haunting yet enrapturing film from Kelly Reichardt.

I tried to watch this about a month ago because I had read another positive review of it and I wanted to see if it would make my Top 10 of 2011 list.

"There's not much plot to the story" is the key point for me. After about 45 minutes of this I finally gave up and started fast forwarding a few minutes at a time, then watching for a few minutes to see if anything new was happening, until it got to the (non)ending.

It really felt like a 20-30 minute stage play extended as much as possible by long shots of wagons rolling to fill out the amount of time a feature length movie needs to be. I think this would have worked much better as a short.

I disagree with that because I knew it wasn't going to be some film that didn't have much plot.

In fact, I like films that don't need a lot of plot. It's all about the images and I was engrossed by those images. It's part of what Reichardt wants to do as a filmmaker since she is known as a minimalist.

I was annoyed at first by that ending but then I realized that it was appropriate since we really don't know what will happen.

I think I have been avoiding it for the same reason Chip hated it....is it too boring? I really don't like movies that don't have plot development....I might give it a try, but it's not a priority! Good review, as always!

@Diana-It depends on your attention span and it is not an easy film to see.

There isn't a lot that goes on. Then again, a lot of Kelly Reichardt's films don't have a lot of plot as it's all in tune with her minimalist style. What separates this film from Old Joy and Wendy & Lucy are two things.

1. Meek's Cutoff is Reichardt's longest film at 105 minutes while the other films she made were less than 85 minutes.

2. It's a period piece that is based on a real-life incident where it's mostly about what would happen in a situation like this.

I agree that it's not for everyone but it's worth watching.

Amazing review! I always wanted to see this movie because I love Michelle Williams, if you say her performance is incredible it's a good enough reason to watch it for me.

@Sati-Michelle Williams is pretty much one of the best actresses working today.

I don't think she's ever given a bad performance. Who would've thought that the pretty blonde from Dawson's Creek would become this incredible actress?

I'm not a fan of her work in Shutter Island and Synecdoche, NY but she really is great actress.