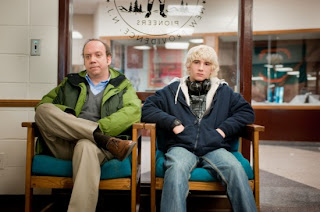 Written and directed Thomas McCarthy from a story co-written with Joe Tiboni, Win Win is the story about an attorney and high school wrestling coach who is appointed an elderly client suffering from dementia. When the client’s grandson shows up, the attorney reluctantly takes him in to live with his family while putting him on the wrestling team. The film explores a man’s willingness to try and do the right thing while dealing with the realities of the world. Starring Paul Giamatti, Amy Ryan, Alex Shaffer, Bobby Cannavale, Jeffrey Tambor, Melanie Lynskey, Margo Martindale, and Burt Young. Win Win is a witty yet heartfelt comedy-drama from Thomas McCarthy.

Mike Flaherty (Paul Giamatti) is an attorney struggling to maintain his law practice with friend Stephen Vigman (Jeffrey Tambor) as the two also coach the local high school wrestling team. While he’s also raising two girls with his wife Jackie (Amy Ryan), Mike is dealing with financial problems as he takes in aging client named Leo (Burt Young) who is suffering from the early stages of dementia. Unable to reach Leo’s daughter Cindy (Melanie Lynskey) and Leo is to be in the care of the state, Mike decides to take care of him as he needs the money that will be received every month. Meanwhile, Leo’s grandson Kyle (Alex Shaffer) arrives to live with his grandfather as Mike and Jackie take him in for a few days while Leo is staying at an old folk’s home.

Realizing that Kyle refuses to come home to his mother as she is currently in rehab, Mike and Jackie try to figure out what to do as Mike learns that Kyle is a talented wrestler. With help from his friend Terry (Bobby Cannavale) as an assistant coach, Mike puts Kyle in the team as Kyle becomes the team’s star while helping them become a better team. With Kyle being part of Mike and Jackie’s family while Leo remains in good care, Cindy suddenly shows up with her lawyer (Margo Martindale). Mike tries to settle things until things eventually unravel due to Cindy’s presence as Kyle starts to act out and become unsure who to trust.

The film is about a guy trying to do what is right and save his law practice while taking care an elderly man and his grandson with the help of his wife and a couple of friends. While it’s a premise that doesn’t seem exciting, it is told in a more realistic fashion as it’s about a guy trying to do what is right but he does a few things that is wrong while not being open to his wife about these problems. Yet, Mike Flaherty is a guy who means well and wants to make sure that this old man is in good care. The problem is that he can’t have him stay at his home and watch him all the time due to things he’s got to do while the man’s grandson arrives which further complicates things.

While Kyle is just a kid who has endured a troubled home life due to his mother’s substance abuse and other issues. He finds a home in Mike and Jackie where he is able to have a good home and actually do good in school until his mother arrives. While Cindy is looking for a payoff, she’s not a totally despicable person as she wants to get herself together despite her testy relationship with Kyle. Part of Thomas McCarthy’s gift as a writer is creating characters who are human and all have good intentions though they do the wrong things. McCarthy’s script does follow a certain formula in terms of its structure including a more dramatic third act. McCarthy does manage to stray away from certain dramatic and humorous touches to create a story that is touching but also funny.

McCarthy’s direction is straightforward in terms of its compositions and scene setting but it’s also very engaging in the way he portrays the drama and humor. Notably in the latter as it’s mostly played naturally without striving too hard to get a laugh. McCarthy’s approach to directing actors is to have them figure their characters out while giving them a chance to relax and play their parts. Shooting on location in a small town in New Jersey, the film does have an atmosphere where it does feel like a small town but also that’s full of life. Overall, McCarthy crafts a very solid and light-hearted film that does more than its premise suggests.

Cinematographer Oliver Bokelberg does a nice job with the film‘s colorful cinematography from the sunny yet winter-like look of the exteriors to more intimate shadings for the nighttime interior scenes. Editor Tom McArdle does a very good job with the editing in maintaining a leisured pace for the film including an amazing montage to emphasize Mike‘s sudden streak of good luck. Production designer John Paino, with set decorator Amanda Carroll and art director Scott Anderson, does terrific work in the look for Mike and Leo‘s respective homes along with the more posh home of Terry.

Costume designer Melissa Toth does a fantastic job with the costumes from the more casual clothing most of the characters wear to the wrestling uniforms Kyle and his teammates wear. Sound editor Paul Hsu does some fine work in the sound pieces from the intimate conversation moments to the raucous atmosphere of the wrestling matches. The film’s score by Lyle Workman is wonderful for its folk-rock based score of guitars and pianos along with a soundtrack that is a wide mix of hard rock and metal for the music in the wrestling training scenes to other music from acts like the National and Bon Jovi.

The casting by Kerry Barden and Paul Schnee is truly a highlight of the film for the ensemble that is created. Appearing in small roles include Nina Arianda as Mike’s secretary Shelly, Sharon Wilkins as the judge that appoints Mike the role of Leo’s guardian, David W. Thompson as the very funny wrestling teammate Stemler, Clare Foley as Mike and Jackie’s eldest adolescent daughter Abby, and in the dual role of their youngest daughter Stella are Penelope and Sophia Kindred. Other notable small roles include Margo Martindale as Cindy’s reasonable attorney, Burt Young as the ailing but funny Leo, Jeffrey Tambor as Mike’s witty law/wrestling associate Stephen, and Melanie Lynskey as Kyle’s troubled and conniving mother Cindy.

Bobby Cannavale is excellent in a very funny performance as Mike’s best friend Terry who helps Mike coach the team to evade his own personal issues. Alex Shaffer is brilliant as the troubled teenager Kyle who finds a home in Mike and Jackie while dealing with his own personal issues as he tries to get to know his grandfather. Amy Ryan is superb as Jackie where Ryan displays a great sense of wit as a woman who becomes the mother that Kyle needs as there’s a real sense of toughness in a woman who doesn’t take shit from anyone. Finally, there’s Paul Giamatti in a very remarkable performance as Mike Flaherty. Giamatti brings a great sense of humility and earnestness as a man wanting to do what is right while hoping to actually gain something that will make him think he’s a good guy as it’s Giamatti at his best.

Win Win is a stellar and enjoyable film from Thomas McCarthy. Featuring a marvelous ensemble cast led by Paul Giamatti and Amy Ryan, it’s a film that is well-acted along with a fascinating story about people trying to find some sort of happiness as well as win a few in life. While it’s the most accessible film that McCarthy has done in terms of humor and light drama. It’s also a film that allows the audience to find characters that they can relate to. In the end, Win Win is a rich and delightful film from Thomas McCarthy.

Loved this flick! Paul Giamatti is so good at playing these flawed yet amiable regular Joes. McCarthy is great with these honest every day life stories.

I enjoyed it and it was better than I thought. Paul Giamatti is always great playing these characters and you root for the guy.

I'm anxious for what McCarthy will do next.

It wasn't as wonderful and amazing as everybody in the world made it out to be but it has a good heart and everybody does a great job with their performances. Still, I don't know how Giamatti would land a hottie like Amy Ryan. Good review Steve.

@Dan-Well, if a guy like Geoffrey Arend can land and marry a hot chick like Christina Hendricks. It means there's hope for us regular dudes.

Besides, Paul Giamatti is awesome.

I forgot Thomas McCarthy directed this. The film has now jumped several spots on my Netflix queue. Hopefully I will get to the film in the next week or so.

@CS-It's a bit of a different film from what McCarthy has made but it still has his niche of creating characters you want to root for.