Originally Written and Posted at Epinions.com on 6/29/04 w/ Additional Edits. 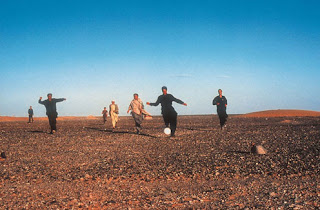 Directed by Michael Winterbottom and written by Tony Grisoni, In This World is about two Afghan teenagers in a Pakistan refugee camp deciding to seek refuge in London. Leaving their families behind, the two boys go through the sections of Pakistan, Iran, Turkey, Italy, France, and London, in a four-month trip from February to June 2002. Along the way, they endure political strife, cultural differences, and tragedy where freedom is come at a whole lot of costs. Winner of the 2003 Golden Bear prize at the Berlin Film Festival along with the British Academy Award for Best Non-English film, In This World is an amazing journey in today's chaotic world from one of Britain's finest filmmakers.

The film begins in February 2002 in Peshawar, Pakistan, near the border of Afghanistan where already, refugees from the war-torn country are fleeing. Living in the Peshawar camp is a small, 16-year old boy named Jamal (Jamal Udin Torabi). Living with his little brother and relatives, Jamal is seeking to get out of Pakistan with the war between the U.S. and Al-Qaeda increasing. With an older teenager named Enayat (Enayatullah), the two meet with men who are trying to get Afghans out of Pakistan. Jamal and Enayat take the offer with some money given to them for currency exchange in Iran along with some supplies needed. Jamal gets ready to leave as he bids farewell to his family along with Enayat as they make their way to Quetta, Pakistan for their first stop.

During their trip to Quetta, section patrolmen who are watching stop them and Jamal gives one of the patrolmen Enayat's Walkman as a bribe. Enayat couldn't believe that Jamal forced him to give him that but sacrifices had to be made. After stopping in Quetta, they drive south all the way to the Iranian border where they stop in a town. They meet a man who gives them shelter and new clothes so they wouldn't be suspected of being Afghans. Plus, they also had to talk in another Islamic dialect for more proof. After a few days, they take a bus but a patrolman stops the bus and learns that the two are Afghans were they were sent back to Pakistan on April 2, 2002. They are back in a Pakistan town for a few days where they get help and take a bus all the way to Tehran.

After a few days in Tehran, they take another car that will lead them to a nearby refugee camp in the Kurdistan Mountains where they meet fellow Kurdish refugees. They walk to the Iranian-Turkish border where they arrive in Turkey and stay at another camp. For the next several days, Enayat and Jamal worked in a factory to take them on a trip to Istanbul so they can take a ship with fellow Kurds to go to Italy. After days of working, trouble began to brew and the two companions set on a ride to Istanbul where they and fellow Kurdish refugees including a baby are in a metal compartment so they can smuggle themselves on a ship to Catanzaro, Italy. During the 40-hour stay in the metal compartment, everyone begins to lose their breath and upon their arrival, everyone but Jamal and the baby were the ones to survive but the rest had either passed out or died. Jamal is forced to survive by himself where he steals a woman's purse to buy a train ticket to Paris and then go a nearby camp near the English Channel where he meets Yusef. Yusef helps him to get to his arrival to London in June where Jamal makes it but at a lot of cost along with a very uncertain future.

Shot in DV-video handheld camera, the film almost has a Dogme 95-like feel, especially in that same realm director Michael Winterbottom used with cinematographer Robby Muller. The only differences is that the cinematography by Marcel Zyskind is more exquisite and ravishing in conveying the realism the journey with Winterbottom's fluent direction that gives the audience a real third-person view as if the audience is part of the journey as well. With only a small crew filming that included Winterbottom, Zyskind, and sound mixer Stuart Wilson, the film is given a minimalist feel with its jerky camera angles and worldly wide-angle shots. Tony Grisoni's screenplay gives the film a very simplistic tone, particularly in an epic-like journey where it relies on its simplicity and improvisational dialogue with its main characters.

To call In This World a foreign film made by a British director seems to be very pig-headed when really, it's a world film. The performances by Jamal Udin Torabi and Enayatullah aren't just realistic but also compelling and sympathetic. Torabi brings the more intellectual approach to his relationship with Enayatullah where he teaches him a bit of English and street skills. Enayatullah meanwhile, is more of the adult in the film and is more of a dream than his younger companion. These performances along with smaller roles throughout the film are very natural, particularly since they're playing as themselves and bringing light to the Islamic culture of Pakistan and Iran.

The cultural differences of this film is very stimulating to watch whereas Pakistan seems to be more in a Third World kind of background with its camps and abandoned buildings. Iran is a bit more modern, especially in it's clothing though some have chosen to wear the traditional robes. The film is an amazing look into the cultural differences of Asia and Europe. Especially with Dario Maianelli's melancholic, orchestral film score that really sets the town for the film's sadness and tragedy along with a wonderful film soundtrack of Islamic music from traditional to modern. From the viewpoint of an outsider like Winterbottom, we begin to see that while the look and sounds of Islam may be different from our own world but in truth, it's clearly not lost in translation since we all enjoy similar ideals and freedoms.

The 2004 DVD release from Sundance in comparison to its recent series is probably the most superior. Notably because of Michael Winterbottom's involvement by making an introduction on why he wanted to do the film and how he wanted to present the Islamic world to a wide audience. Along with its widescreen format along with English subtitles, the features include production notes and biographies when you put on your DVD-rom drive. The special features also include two different trailers for In This World,one American and another is British with different scenes and introductions. From Sundance comes highlights from its film series of movies like The Other Side of the Bed, Searching for Paradise, The Slaughter Rule, and many more movies.

The best features is a behind-the-scenes look of the making of the film with commentary from Winterbottom and screenwriter Tony Grisoni where they talked about the approach of the film and their relationship with the actors which turned out to be very playful. What is really surprising was given to the strict rule of the Islam nations; they actually allowed Winterbottom to film the movie since he had permission slips, papers, and such along with his crew and actors. Also shown in contrast with the film's dark tone is a lot of football matches between the crew and actor and townspeople.

In This World is an entrancing film from Michael Winterbottom as it stands as one of his best films. A true genre-bending film that is part-road film and part drama, it is definitely an unforgettable film that explores what it takes to find freedom in the post-9/11 world. It's also a film that allows its audience to be engaged into a world that is foreign while being an extra passenger in this incredible journey. In the end, In This World is a sensational film from Michael Winterbottom.