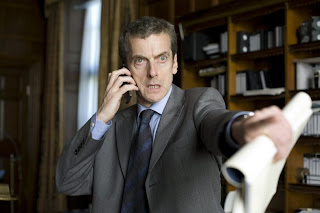 Based on the British TV show The Thick of It, In the Loop is the story of a British government official who makes an offhand comment on TV as things go out of control as both American and British government officials try to sort things out as they’re on the verge of a war with the Middle East. Directed by Armando Iannucci and written by Iannucci, Jesse Armstrong, Simon Blackwell, and Tony Roche with additional material from Ian Martin. The film is a black-comedy satire that explores the backstage world of politics as people try to prevent or start a war. Starring Peter Capaldi, Tom Hollander, Gina McKee, Mimi Kennedy, Anna Chlumsky, Chris Addison, Steve Coogan, David Rasche, and James Gandolfini. In the Loop is a whimsical yet very witty political comedy from Armando Iannucci.

After an interview with International Development minister Simon Foster (Tom Hollander) for the BBC goes bad due to comments made by Foster. Malcolm Tucker (Peter Capaldi), the director of communications for the prime minister, goes on damage control over Foster’s comments as he confronts Foster and communications director Judy Molloy (Gina McKee) over what happened. With Foster’s comments getting into more trouble about a possible war happening, it only worsens when U.S. officials led by U.S. Assistant Secretary of State for Diplomacy officer Karen Clark (Mimi Kennedy) visits where Foster attends the meeting and becomes mocked.

Tucker sends Foster and his new assistant Toby (Chris Addison) to Washington D.C. to meet up with Clark and U.S. Assistant Secretary of State for Policy official Linton Barwick (David Rasche) for a meeting with war council that’s to include Lt. General Miller (James Gandolfini). Foster and Toby deal with Clark and her assistant Liza Weld (Anna Chlumsky) as Clark wants Liza to get some information from Toby whom they had known each other since college. After a meeting with the war council where Foster ends up looking more like a fool and information is leaked to the press. With Foster and Toby working for a local constituent building where they deal with a local (Steve Coogan), Toby gets himself into trouble while Foster’s shenanigans has his being mocked by the press.

With Tucker sending Foster and Toby back to the U.S. where they’re to travel to New York City for a United Nations meeting, Tucker and Molloy join them while Tucker sends Senior Press Officer Jamie MacDonald to find out who sent out the leak. The brash MacDonald confronts Diplomacy Director of Foreign Office official Michael Rodgers (James Smith) and Rodgers’ secretary Suzy (Olivia Poulet) about the leak while Foster makes a decision about his political career. In the U.N., more complications arose as Foster becomes aware of what he’s been doing while Tucker would make moves that would help save face for the British government.

The film is a satire on political strategy that involves the mistake of an official’s comment leading to problems between U.S. and British relations as they all try to smooth things out. In a game of manipulative politics, a communications director gets this official in the U.S. along with an assistant where they end up being played in a game of strategy where the U.S. try to be on top of things. The screenplay delves into this world where everyone in the game of politics try to outdo who while using people in the process for their own gain. Throughout the film, there’s characters who clearly find out they’re being used while some are willing to be involved.

The script is also very multi-layered for the fact that there’s a lot of characters with overlapping dialogue along with back-and-forth narratives that revolve around both British and U.S. political strategies as each faction figure out what to do. With a lot of the dialogue being fast, stylized, and often crass due to the more aggressive characters in the film. It adds to who these people are as they’re doing damage control where they become very confrontational and vulgar as they’re all trying to protect their territory. Caught in the middle of this damage control is this official who finds himself becoming a pawn as he would become more confused by the world of politics.

Armando Iannucci’s direction is truly engaging to watch in the way he goes for this very offbeat, cinema verite style that has a lot of intimate moments on the conversations where the camera is always there to see what is going on. Even if it involves someone in the background watching where Iannucci knows that a character in the background is either a target or is about to do something that will shake things up. While the film is essentially a satire, Iannucci doesn’t stray into silly gags or parodies but rather go for small moments of silliness while letting the actors just go all out in the characters they play no matter how despicable or idiotic they are. Overall, Iannucci creates a truly superb and very funny film about political damage control.

Cinematographer Jamie Cairney does an excellent job with the film‘s cinematography providing differing looks to the British and American locations with the British interior and exteriors being a bit more grimy while the American set pieces having more lights to complement their personalities. Editors Ant Boys and Billy Sneddon do nice work with the editing by capturing a lot of the intensity of the conversations that goes on with some rhythmic cutting as well as straightforward cuts to play up the more intimate moments of the film. Production designer Cristina Casali, along with set decorator Clare Keyte and art director Nick Dent, does fantastic work with the set pieces such as the offices of the British officials to the more spacious offices and conferences rooms of the American officials to contrast the two differing world of politics.

Costume designer Ros Little does a terrific job with the costumes in maintaining a look for all of the characters wearing suits and all sorts of business attire while Lt. General Miller maintains a uniform to emphasize his intimidating persona. Sound supervisor Tim Alban does a fine job with the sound to capture the intimacy of some of the private conversations to the more raucous world of the board meetings and such that occur in the film. The film’s score by Adem Illhan with the Elysian Quartet is pretty good as it’s very low-key with plaintive piano pieces to more thrilling orchestral arrangements to play up the humor and more tense dramatic moments of the film.

The casting by Sarah Crowe and Meredith Tucker is brilliant for the ensemble that is created for this film. In small but notable roles, Zach Woods as brown-nosing junior staffer, Paul Higgins as the very angry Scottish official Jamie MacDonald, Olivia Poulet as Toby’s girlfriend/civil servant Suzy, James Smith as a classical-music loving diplomacy director, Alex MacQueen as the British representative for the U.N., and Steve Coogan as angry local upset over a wall that’s to collapse on his mother’s garden. Anna Chlumsky is very good as the ambitious assistant Liza whose paper about war gets her a lot of attention while David Rasche is excellent as the smarmy U.S. official Linton Barwick. Gina McKee is wonderful as a communications director who helps try to smooth things out while Mimi Kennedy is terrific as a diplomacy official who tries to use Foster for her own gain.

Chris Addison is a delight to watch as the naïve assistant who goes way over his head in trying to help out Foster only to end up being a key player to further complicate matters. James Gandolfini is great as Lt. General Miller as a man unsure of his role while not wanting to go to war as he also tries to use Foster for his own political reasons. Tom Hollander is amazing as political official Simon Foster who unknowingly creates an incident where he becomes a pawn in a political game furthering his confusion about his role in politics. Finally, there’s Peter Capaldi in a magnificent performance as the ambitious yet terrifying Malcolm Tucker who bullies his way to do damage control while always being very intimidating to officials whether its British or American.

In the Loop is an extraordinary yet humorous film from Armando Iannucci. Featuring a fantastic ensemble cast led by Peter Capaldi, it’s a film that explores the world of foreign relations with biting satire and brash humor. While it’s not an easy film to follow through in terms of its subject matter and unconventional approach to comedy. It is the kind of film that is willing to explore the fallacy of politics and do it in a very witty manner. In the end, In the Loop is a masterfully-crafted comedy from Armando Iannucci.

Related: The Death of Stalin

It's one of my all time favorite comedies and I can watch it, along with The Thick of It over and over again. Capaldi should have won Oscar for his performance, it's just outstanding. Excellent review!

I loved the fact that his character is always on the edge and seems to despise Americans. The scene where he deals with a young intern and really makes that little shit squirm and wants to re-start a war between the U.S. and Britain. I'll join the British for that one.

Ah christ I love this movie. How Capaldi wasn't nominated for an Oscar is beyond me, dude is hilarious.

@Alex-Totally. I love the way his eyes pop out as if he's about to kill someone. Please elect this man for prime minister of Britain.