Originally Written and Posted at Epinions.com on 2/15/09 w/ Additional Edits. 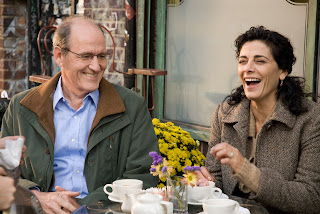 Written and directed by Thomas McCarthy, The Visitor tells the story of a widowed economics professor whose life is taken a dull turn as he deals with the death of his wife and the boredom of being a professor. When an immigrant couple is seen in his apartment believing that they had rented it, he reluctantly takes them in as he befriends them and eventually takes on a new lease on life. The film explores the world of immigration, identity, and cultural understandings in the post 9/11 world of New York City as McCarthy gives Richard Jenkins the role of the widowed professor. Also starring Haaz Sleiman, Danai Jekesai Gurira, Richard Kind, Michael Cumpsty, Marian Seldes, and Hiam Abbass. The Visitor is a powerful, touching drama from Thomas McCarthy.

Walter Vale (Richard Jenkins) is a widowed economics professor living a life that is very routine with not much going on. Trying to do piano lessons with a teacher (Marian Seldes) while finishing a book hasn't given him much excitement as his teaching has also become uninspired. When he's asked to present a paper that he co-authored by his department head Charles (Michael Cumpsty), he reluctantly takes the offer to go to New York City to attend the seminar. Arriving to NYC from Connecticut, Walter arrives at his apartment that he owns and lives on occasional periods to find that two people are living there. The Syrian Tarek (Haaz Sleiman) and his Senegalese girlfriend Zainab (Danai Jekesai Gurira) are immigrants who believed that the apartment was available only to realize they were swindled. Walter decides to take them in since they weren't really being any trouble.

Tarek works as a djembe player for jazz bands in NYC while Zainab sells handmade ethnic jewelry that has given them some money as Walter befriends Tarek. Notably on the djembe drum which Walter takes a liking to as it's given him some excitement in his life. Especially as Walter becomes bored by the seminar work he's doing as he and Tarek take part in a drum circle in a NYC park as it broadens Walter's state of mind. When Walter and Tarek go to the subway as they return from a drum circle, a misunderstanding at a subway turnstile gets Tarek in trouble as Walter tries to tell the cops that Tarek didn't do anything wrong. After telling Zainab about what happened to Tarek, she decides to leave the apartment to live with a cousin in the city. After visiting Tarek at a detention center near Queens, Walter calls in a lawyer (Amir Arison) to take the case.

Walter then gets an appearance from Tarek's mother Mouna (Hiam Abbass) who hasn't received a call from Tarek in five days. After telling Mouna what's going on, Mouna wants to see the center that Tarek is in but knows she can't go in. Mouna stays with Walter as she calls Tarek from the center while talking to the lawyer about what could happen as Tarek hadn't done anything wrong at all. After meeting Zainab, Mouna wants to know the things that Tarek and Zainab does giving Walter a chance to take time away from the seminar. Following a brief return to Connecticut, he returns to NYC to check up on Tarek while giving Mouna a chance to have a night in the city. Awaiting word on Tarek, Walter deals with what might happen to Tarek as Mouna reveals something. For Walter, the experience of the people he's met in the few weeks would reawaken the lost soul he had been dealing with.

The film's title is about a man visiting a world that's different to him as he is reawaken from his routine, dull life. In some ways, the film is political given the policy towards illegal immigrants following 9/11 as it deals with racial profiling and ethnicity that was going in G.W. Bush-era America. Yet, it's really a character study that writer-director Thomas McCarthy sets up as explores a man trying to find new meaning in his life through the people he encounters as he explores new worlds and passions that gives him meaning. After meeting the mother of the man he meets, he helps her do things that she wanted to do and attend that also gives his life more meaning where he gets to confess about his own life and lack of purpose.

McCarthy's script is wonderful in its emphasis on character development, issues, and staging allowing its protagonist along with three supporting characters to interact and get to know each other with audiences having the time to get to know them. McCarthy's direction is mostly straightforward yet engaging in its drama and staging. Notably in giving the actors a chance to perform while McCarthy reveals the unique world that is New York City which is essentially, a cultural hotbed where it's mostly a city of different worlds and cultures. Not just some American city. While the film does move slow in some spots, Thomas McCarthy does create a film that is magical and engaging with a universal story about the reawakening of a man and his explorations into new worlds.

Cinematographer Oliver Bokelberg does excellent work with the film's photography which is mostly straightforward in its look of NYC and Connecticut in its daytime exteriors and interiors. The nighttime scenes in the interiors with little light reveals the intimate mood and world that Walter lives in as it works to complement the mood of the film. Editor Tom McArdle does some excellent work in the editing with its smooth transitions, fade-outs and rhythmic cutting though the pacing at times is slow in a few moments. Production designer John Paino, set decorator Kim Chapman, and art director Len Clayton do fine work with the apartment and home of Walter while doing great work in creating the look of Zainab's table of jewelry. Costume designer Melissa Toth does good work with the costumes as it's mostly straightforward from the suits that Richard Jenkins wears to the exotic clothing that Zainab wears.

Sound editor Paul Hsu does great work in capturing the sound of New York City in all of its chaos but also the performance of the drum circle that goes on in the city that adds vibrancy to the film. Music composer Jan A.P. Kaczmerek brings a light score driven by soft piano melodies to complement the mood of the film. Yet, it's mostly the Afro-beat music of drum circles plus a couple of tracks from Fela Kuti that are the highlight of the film's soundtrack.

The casting of the film is truly superb with cameos and small appearances from Richard Kind as a neighbor of Walter's from the apartment, Marian Seldes as Walter's piano teacher, Deborah Rush as a woman buying Zainab's jewelry, Amir Arison as the lawyer Walter hires for Tarek's case, Michael Cumpsty as Walter's colleague Charles, and Maggie Moore as the photo of Walter's late wife. Danai Jekesai Gurira is very good as Zainab, Tarek's Senegalese girlfriend/jewelry maker who tries to deal with Tarek's arrest while finding an unlikely friend in Walter whom at first, isn't receptive. Haaz Sleiman is excellent as Tarek, a djembe player who gives Walter a new lease on life while being in trouble as he finds a true friend in Walter. The film's best supporting performance is veteran Israeli-Arab actress Hiam Abbass as Mouna, Tarek's mother. Abbass' subtle, quiet performance is done with little emotion and charm that it's one that really stands out. Especially in her scenes with Richard Jenkins that's more about emotions and conversations instead of something that could've gone into a romantic angle.

Finally, there's Richard Jenkins in what has to be the performance of his career. With not much emphasis on high drama or trying to look all pathetic. Jenkins' performance is filled with restraint and a mild-mannered approach of a man just unsure what to do and how to get out of his dull life. Jenkins' performance allows the character of Walter Vale to wake up and be alive where Jenkins adds new life to the character without missing a step. It's truly a remarkable and sensational performance from the veteran actor who is often seen in supporting roles or in character-driven parts.

The Visitor is a superb, enthralling film from Thomas McCarthy featuring a brilliant leading performance from Richard Jenkins. While the film might not have the humor or richness of McCarthy's previous The Station Agent, The Visitor proves that McCarthy is a unique storyteller that touches on real characters in real-life situations that makes them endearing to watch. Along with a great supporting cast, notably Hiam Abbass, the film truly belongs to actor Richard Jenkins who gets a chance to shine in the spotlight while nabbing a well-deserved Oscar nomination for his performance. In the end, The Visitor is a gem of a film that deserves to be seen by a wide audience.

"Finally, there's Richard Jenkins in what has to be the performance of his career."

I completely agree. I was literally going to use those exact words in my comment, but you had already used them in your post.

He got a much deserved Oscar nomination for his work in this film.

Richard Jenkins is a guy we've all seen in films and finally, he gets the role of his career. It's still the best thing he's gone with Step Brothers a close second.