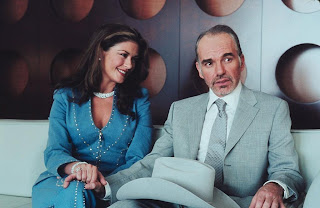 Based on an original story by Robert Ramsay, Matthew Stone, and John Romano, Intolerable Cruelty is the story of a divorce lawyer who goes after a gold digger who is marrying men for their money as he suddenly falls for her. Directed by Joel and Ethan Coen with a script by Robert Ramsay and Matthew Stone that was later re-written by the Coen Brothers. The film is an exploration of a dim-witted man who tries to play a game of wits with a woman who is more than capable of beating him. Starring George Clooney, Catherine Zeta-Jones, Cedric the Entertainer, Richard Jenkins, Edward Herrmann, Geoffrey Rush, and Billy Bob Thornton. Intolerable Cruelty is a raucous comedy from the Coen Brothers.

Miles Massey (George Clooney) is a top divorce attorney who is notorious for creating pre-nups that allow his clients with everything while the other with nothing. Such as with the case TV soap opera producer Donovan Donaly (Geoffrey Rush) and wife Bonnie (Stacey Travis) where Massey represents the latter. When a millionaire named Rex Rexroth (Edward Herrmann) has been caught with another woman by private investigator Gus Petch (Cedric the Entertainer). Rexroth hires Massey as his attorney as Massey meets and falls for Rexroth’s wife Marylin (Catherine Zeta-Jones) who brought in Massey’s rival Freddy Bender (Richard Jenkins). Wanting to find as much dirt on Marylin before the case, Massey hires Gus to sneak into the home. At the trial, Massey brings a surprise in a flamboyant concierge (Jonathan Hadary) to shake things up.

After another successful win, Massey is smitten with Marylin as she makes a surprise appearance announcing she’s found a new man in oil baron Howard D. Doyle (Billy Bob Thornton). The two ask for Massey’s notorious pre-nup agreement leaving Massey confused as the wedding goes on as planned until Doyle destroys the pre-nup at the reception. Some months later when Massey and his associate Wrigley (Paul Adelstein) attend a convention in Las Vegas, Marylin reveals that she divorced Doyle as she feels lonely. Massey and Marylin then did something to express their feelings for another only for Massey to discover something horrible. Dealing with his ailing boss Herb Myerson (Tom Aldredge), Massey realizes what he must do to save his reputation.

The film is about a top divorce attorney who is notorious for winning numerous cases leaving his client with everything and the other with nothing while protecting richer clients with a pre-nup. When he falls for a woman whose husband he’s representing, he starts to question his motives as she starts to hire him where the two also deal with their own attraction. While the film is largely a black comedy of sorts that opens with a TV producer catching his wife cheating on him. It’s a comedy that involves a lot of people doing despicable things while there are those who feel duped about what happen to them. The screenplay features a lot of the Coen Brothers quirks and hi-jinks that is synonymous with their comedies. Yet, the characters aren’t as totally fleshed out as there’s not much development in many of them with the exception of Miles Massey who ends up becoming a buffoon for his actions.

The direction of the Coen Brothers is pretty straightforward in terms of its compositions as there aren’t a lot of moments that really stand out in terms of framing. Yet, they do create some amazing comedic moments such as the film’s opening scene, the court room scene, and anything involving Howard D. Doyle. In many ways, the film is Coen Brothers-light where they restrain the over-the-top zaniness of their humor to complement the romantic-comedy genre. While the script does have plot formulas that is expected, the Coen Brothers don’t really do enough to subvert it. Despite the shortcomings of the script and not enough emphasis to make it more daring. The Coen Brothers still provide a very solid and entertaining romantic comedy.

Cinematographer Roger Deakins does an excellent job with the film‘s very sunny and lush photography that is awash with lots of yellow lights to compliment the locations in Los Angeles and Las Vegas along with more stylized lighting schemes for some of the nighttime interior scenes. Under the Roderick Jaynes alias, Joel & Ethan Coen do some nice work in the editing in utilizing rhythmic cuts for the film’s opening scene as well as stylized transitions to help smooth things out while maintaining a tightened pace for the film. Production designer Leslie McDonald, along with set decorator Nancy Haigh and art director Tony Fanning, does some fantastic work with the set pieces such as the lavish mansion of some of Massey’s clients as well as the extravagant hotel room that Massey and Marylin stay at in Las Vegas.

Costume designer Mary Zophres does a fantastic job with the costumes in creating the stylish and posh dresses that Marylin wears including her denim-laced clothes she wears when she introduces Howard to Massey. Sound editor Skip Lievsay does a terrific job with the sound work from the intimate setting of the meetings to the convention center where Massey is the key speaker. Music composer Carter Burwell creates a wonderful score that is filled with lots of playful folk music and flourishing orchestral pieces to play up the humor and tense moments of the film. Music supervisor David Diliberto creates a very fun soundtrack that includes music by Elvis Presley, Tom Jones, Simon & Garfunkel, Edith Piaf, Chuck Mangione, Melissa Manchester, and many others to bring a pop element to the film.

The casting by Ellen Chenoweth is brilliant for the ensemble that is created as it includes a cameo appearance from Bruce Campbell as well as small roles from Julia Duffy as a rich friend of Marylin, Blake Clark as a convention secretary, Irwin Keyes as a sickly hitman, Jonathan Hadary as a flamboyant baron/concierge, Stacey Travis as Donovan’s cheating wife whom Miles takes a client, and Tom Aldredge as Miles’ ailing yet intimidating boss. Richard Jenkins is really good as Marylin’s underachieving lawyer Freddy Bender while Paul Adelstein is really funny as Miles’ associate Wrigley. Edward Herrmann is very good as Marylin’s duped husband Rex Rexroth who has a fondness for trains while Geoffrey Rush has a fabulous small appearance as scorned TV producer in the film’s opening scene. Cedric the Entertainer is very funny as a private investigator who always get what he wants while sporting a great one-liner in “nailin’ yo ass”.

Billy Bob Thornton gives a very hilarious performance as a possibly dim-witted oil baron named Howard D. Doyle who is hopelessly in love with Marylin who would do anything to prove his love for her as it’s Thornton at his best. Catherine Zeta-Jones is pretty good as Marylin, a gold-digger who proves to be a match for Massey as she tries to charm him as it’s Zeta-Jones proving that she can be funny in a light-hearted way. Finally, there’s George Clooney in a superb performance as Miles Massey as Clooney brings his swagger to the role of a devious lawyer who then becomes a total buffoon over what he’s done. He and Zeta-Jones have some good chemistry in the film’s romantic moments though Clooney does act a bit cartoonish at times late in the film as it’s still a notable performance in his career.

Intolerable Cruelty is a funny and heartwarming film from the Coen Brothers that features stellar performances from George Clooney, Catherine Zeta-Jones, and Billy Bob Thornton. While it’s a film what will appeal to audiences that enjoy romantic comedies that features a bit of quirks. It’s a film that does try a bit hard to be a lot of things despite its emphasis to entertain. For fans of the Coen Brothers, the film is definitely one of their weakest but it’s still better than a lot of other films that try to be a quirky romantic-comedy. In the end, Intolerable Cruelty is an enjoyable romantic comedy from the Coen Brothers.