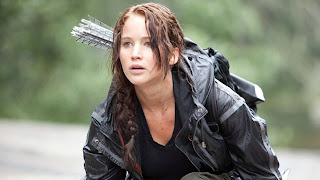 Well, it looks like I might eventually start my 2012 film-going season with the widely-anticipated release of The Hunger Games. I haven't read the books as I prefer to keep the books separate from the films as they're very different mediums. Yet, I have read early reviews already that is suggesting that it's going to be something really special and I'm relieved that it's not going to be another of those awful Twilight films which I think are complete utter crap.
In my week of watching films, I'm trying to pace myself as I would watch 4-5 unseen films a week just to have something to do. I've already gotten started on the next part of my Favorite Film series while I'm about to be finished on the next part of my Auteurs series on the Coen Brothers. The only problem with the latter is that I'm unsure on releasing it in one or two parts as there's a lot of films to cover. All of my previous Auteurs pieces, with the exception of the one on Gus Van Sant, were about filmmakers with small filmographies as I was able to fit them into one entire piece. The rest of the filmmakers I plan to profile for the remainder of the year are those with small filmographies with another possible exception in Stanley Kubrick.
I've already decided that whatever filmmaker I plan to profile in the future with a large filmmography, I will split into various parts. Another project that I'm now become unsure of doing is the Favorite Album series. After finally figuring out how to approach my Favorite Films essay, the albums essays are an entirely different beast. I was supposed to have a piece on Elvis Costello & the Attractions' Imperial Bedroom set for last month but I found myself going into an approach that I really didn't like. It's now shelved as the record I want to discuss is Nine Inch Nails' Year Zero. The only problem is that I have no idea what to write about. It's a bit of a shock for me considering for the fact that I am a big NIN fan.
At this point, I'm thinking of shelving the project altogether as I really have no desire to write about music these days. Plus, I've been listening to an array of different things at the moment like King Crimson, Talking Heads, Spacemen 3, Cocteau Twins, George Harrison, XTC, and various other stuff right now.
The only good side to this that it's given me time to write fictional projects as I've been revisiting an old project that I had thought of years ago. While I'm temporarily shelving a few other projects that I had been working on for the past few months. Finally getting back to this one and doing a major re-write on it, since I have lost the original outline and a few drafts in my old external hard drive, has given me the chance to really stretch things out. I'll post news about that project on my Live Journal page once I finish the outline and start work on the actual script.
One of the new things I've become addicted to and it's become very helpful in tracking the films that I've been watching is Letterboxd. I already have a profile as I have made a few lists and write mini-reviews of films that I've seen throughout the week. It is fun to be involved in as I want any film buff to come in and join the site. It's got a few flaws but it is certainly a fun place.
That's all of the news I can divulge into as I'm going to make more contributions to the LAMB Acting School 101 on Samantha Morton that will include re-edited reviews of Jesus's Son and Code 46. The latter of which will allow me to unlock my old reviews of the films of Michael Winterbottom that I will re-edit and revise while going to see some new ones. I also hope to post some old Ingmar Bergman reviews later this month or early next month where I'll also be posting some old, re-edited reviews of films by Guillermo del Toro who is going to be the next subject of my Auteurs series. Other filmmakers whose films I plan to review for next month are Werner Herzog, Costas Garvas, and Akira Kurosawa.

One of the new blogs I've been following is Aziza's picks which I've been enjoying to read as Diana gave me a 7x7 Award.
Well, I would like to say thank you. I'm glad I've been considered for something. Essentially, there's rules of what to do with this award.
- Tell everyone something that no one else knows about you.
- Link to one of the posts that I personally think best fits the following categories: Most Beautiful Piece, Most Helpful Piece, Most Popular Piece, Most Controversial Piece, Most Surprisingly Successful Piece, Most Underrated Piece, and Most Pride-Worthy Piece.
- Pass this award on to seven other bloggers.
Tell everyone something that no one else knows about you
Oh boy. This is the one question I want to avoid as I'm a very private person and very shy. I don't go out very much except to the cinema (depending on what's playing). What is there to reveal? I'm a closet Debbie Gibson fan? I hate spring more than any other season because of pollen? I really don't know. I guess I will admit that I did have some embarrassing tastes in music and films when I was a kid. I liked New Kids on the Block. I don't know why I thought they were cool when I was a kid. Besides, I think 'Nsync were the best boy band out there. They had the funk!
Most Beautiful Piece: Favorite Films #6: Never Let Me Go
This was a film that I was unable to escape after seeing it a few more times on TV as it's now become a film I truly adore. I wanted to try and articulate why it's such a great film as it took me a few weeks to state my case. I think I succeeded because I'm proud of the piece. I was hoping to say something about it but what I ended up getting was a whole lot more.
Most Helpful Piece: The Beginner's Guide to Terrence Malick
This was tough to pick as I'm not really sure how helpful I can be as I would often think as my Auteurs piece as being great introductions to filmmakers. Yet, I went with the Malick thing because I was hoping to prepare anyone who hadn't seen any of Malick's films as The Tree of Life came out. I think I succeeded in giving an idea of what to expect with Malick's films but I don't think I succeeded in preparing them for the grandeur that was The Tree of Life because it was so avant-garde.
Most Popular Piece: The Best of Natalie Portman So Far (1994-2010)
Based on the stats at more than 4,500 hits (although the 2nd part of my Most Anticipated Films of 2011 was really the most popular at more than 8,000), I knew this was going to be quite popular. After all, it's PO'TMAN MOTHAFUCKA!!!!
Most Controversial Piece: Antichrist
OK, maybe it wasn't controversial when I decided to expand the review back in 2011 for my Cannes Marathon that year. Yet, when I originally wrote and posted it at Epinions.com in the fall of 1999. I got a lot of praise and flak for that review. Many thought I was insane for calling it the best film of the year before the year even ended. I still stand by it. It was just a film unlike anything I had seen that year and it still haunts me.
Most Surprisingly Successful Piece: The Best of Jena Malone So Far.. (1996-2011)
At more than 4000 hits, who would've thought that this piece is still being read by the 100s every week. Not only was it a big success for me personally but a real surprise considering that of the actors I've so far made top 10 lists for. Jena Malone is the one person that I didn't expect to have a devoted fanbase as I'm one of the devotees. I hope it will continue as I would love for everyone to know that she is one of the best actresses working today.
Most Underrated Piece: Peppermint Frappe
This is tough as there's a bunch of reviews and pieces that I feel deserves attention. The reason I chose Peppermint Frappe is because of all the films I've reviewed so far. It's the most obscure film in that list as I'm sure there's not a lot of people that has seen this film.
Most Pride-Worthy Piece: Melancholia
Again, this was tough as I'm proud of a lot of the reviews I've written in the past year. I think the reason I chose Melancholia was because it was a film I really identified with having gone through my own depression 2 years ago which did last for nearly a year. I really took the time to dissect the film after watching it and there was a lot about that film that rang true to me. I'm proud as fuck to have written that review.
Pass this Award to seven other Bloggers:
David of Taste of Cinema
Chip of Tips from Chip
Dan of Dan the Man's Movie Reviews
John of John Likes Movies
Jessica of The Velvet Cafe`
Alex of Film Forager
& Courtney of Big Thoughts from a Small Mind
Well, that is all. Thank you and good night.
Posted by thevoid99 at 12:50 PM

Thank you for thinking of me. I received it elsewhere, too, but have not put up a post yet because I need to give my answers some thought. (I liked yours.) I also figure I should finish my current set of movies.

Oh,it's an honor that my name comes on the top.It looks like you are a true film buff,who does not go out often!!

Hi there! Thanks for linking me! I'll probably not do this right away since I've had a lot of introspective posts about my blogging lately. But I'm really glad you thought of me!

@Chip-Well, it wasn't easy picking 7 bloggers since there's a lot. I knew you already got one from someone else but I also felt you deserve a shout-out.

@David-I should correct that. Thanks for noticing that. One of the reasons I don't go out is because there isn't a lot happening and plus, gas prices are very high in the U.S.

@Velvet-You're welcome. You keep putting out great posts. They're always fun to read.

Great links, I like your choice of Most Helpful, it is certainly for me :)
I can't wait to see your new director posts- you are very elaborate and thorough with your writing and analysing the film, so it will be a pleasure reading them. Good luck!

@Diana-My next Auteurs piece on the Coen Brothers is finally coming on Friday in 2 parts. It's the longest of the Auteurs series that I've written so far.