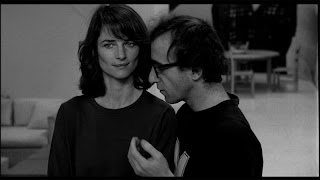 Written, directed, and starring Woody Allen, Stardust Memories is about a filmmaker who finds himself compromised as he yearns to make more serious films while dealing with fans who preferred his earlier, funnier work. Meanwhile, the filmmaker is also dealing with the women in his life as he thinks about an old girlfriend of his. The film has Allen paying tribute to one of his favorite filmmakers in Federico Fellini as he pays homage to Fellini’s 1963 classic 8 ½ in grand style. Also starring Charlotte Rampling, Jessica Harper, Marie-Christine Barrault, and Tony Roberts. Stardust Memories is a whimsical yet ravishing film from Woody Allen.

After a successful period in making comedies and then suddenly going into more serious work, filmmaker Sandy Bates (Woody Allen) is struggling to finish a new film as studio executives and producers want him to create a new ending. Meanwhile, Bates is asked to go to a film festival of his own work as he reluctantly decides to attend as he faces various questions from fans and admirers who question about his more recent work as they all prefer his earlier and funnier films of the past. During his stay at the Stardust Hotel for the festival’s duration, Bates is haunted by memories of his old girlfriend Dory (Charlotte Rampling) whom he constantly thinks about while is currently dating a French woman named Isobel (Marie-Christine Barrault) who had just left her husband.

During the festival, Sandy befriends a classical violinist named Daisy (Jessica Harper) whose boyfriend Jack (John Rothman) is a fan of Sandy’s work as the two talk about various things. Sandy also endures memories of his past while continually being confronted by people over his work and contributing to society as his friend Tony (Tony Roberts) attends the festival to talk with fans about Sandy’s work. Still haunted by memories of Dory, Sandy and Daisy take a drive around town where they would encounter a festival about aliens landing on Earth. For Sandy, the event would only add to his own existential issues about what to do with his life and career.

The film is about a filmmaker whose work as an artist comes into question by everyone as he attends a film festival of his work where he deals with fans, critics, and a French girlfriend with two kids leading to an existential crisis that also involves memories of an old flame. All of these stories is told in a very loose, chaotic script as Woody Allen explores the world of fame and art in a very surreal yet humorous fashion as he pays tribute to Federico Fellini’s 8 ½. The screenplay has Allen delving into these themes while playing with the world of fiction and non-fiction as his Sandy Bates character is a man who is struggling to deal with himself as he wonders what should he do in his life as he has all of these people around him.

Allen’s direction exudes style in the way he pays homage to Fellini’s 8 ½ by opening the film in the same way Fellini opened that film as it is later followed strange surreal moments only to be cut as studio executives and producers stop the picture criticizing what Bates is trying to do. With a lot of gorgeous compositions and scenes where’s there’s lots of characters surrounding Bates as they talk and talk. It’s a film where Allen explores the downside of fame and being an artist while showing a man who had lost his muse and is struggling to deal with this French woman who had left her husband and brings her children along. Allen has his character deal with a lot of these issues while going into strange encounters where a lot of is Fellini-esque to emphasize Bates’ ordeal as he tries to ponder what to do. Overall, Allen creates a very witty tribute to Federico Fellini as well as an engaging piece on the trappings of fame.

Cinematographer Gordon Willis does a brilliant job with the film‘s black-and-white cinematography to play up the Fellini-esque visual style that Allen wants as there‘s some amazing daytime scenery of the beach scenes to more entrancing shots with shades for some of the film‘s interior shots. Editor Susan E. Morse does a fantastic job with the editing to create rhythmic cuts for some of the film’s fanatical scenes involving fans while utilizing some amazing jump-cuts for Bates’ recollection of his last meeting with Dory as it is one of the most touching moments of the film.

Production designer Mel Bourne, along with set decorator Steven J. Jordan and art director Michael Molly, do wonderful work with the set pieces such as the Stardust hotel that Bates stays in to the apartment he lives in filled with famous photographs in the background. Costume designer Santo Loquasto does a nice job with the costumes as it‘s mostly casual clothing to more stylish dresses to represent the different women in Bates‘ life. Sound editor Dan Sable does a terrific job with the sound that is most notable in the film’s opening scene as Bates is talking but his voice isn’t heard due to the fantasy that he’s living in. The film’s music soundtrack includes an array of jazz and standard pieces from people like Louis Armstrong, Cole Porter, Django Reinhardt, Glenn Miller, and Chick Webb.

The casting by Juliet Taylor is the major highlight of the film for the people that is cast including the extras to maintain a certain look that is in tribute to the strange world of Federico Fellini. Making small appearances include Daniel Stern as a young actor, Amy Wright as a fan who wants to sleep with Bates, Anne De Salvo as Bates’ needy sister, longtime Allen muse Louise Lasser in a cameo as Bates’ secretary, Laraine Newman as a studio executive, Judith Roberts as a lounge singer. Helen Hanft as festival host/film critic Vivian Orkin, John Rothman as Daisy’s boyfriend Jack, and in her film debut, Sharon Stone as an ingenue who Bates sees in the film’s opening sequence. Tony Roberts is very good as Bates’ friend and actor Tony who tries to help Bates deal with his issues while Marie-Christine Barrault is wonderful as Bates’ caring girlfriend Isobel.

Jessica Harper is excellent as the smart and low-key Daisy who befriends Bates as she is interested in his views of the world as she reveals her own frustrations in being a classical musician. Charlotte Rampling is radiant as Bates’ former flame Dory who appears in strange flashback scenes as she plays the woman Bates thinks is perfect only to be hampered by her own insecurities as it’s a truly mesmerizing performance for the British actress. Finally, there’s Woody Allen in a very funny performance as Sandy Bates as Allen takes his usual persona to explore a man going into an existential crisis while dealing with fame and all sorts of things in a performance that is a joy to watch.

Stardust Memories is a charming yet very playful comedy from Woody Allen. Featuring great performances from Charlotte Rampling and Jessica Harper, the film is among one of Allen’s most stylish and confrontational films as he explores the downside of fame. Notably as it pays tribute to Federico Fellini in a grand way that Fellini fans will definitely enjoy. In the end, Stardust Memories is a marvelous film from Woody Allen.

I suspect a second viewing of STARDUST is in order. It's certainly pays tribute to 8 1/2 - but it seemed to lack a story worth getting invested in. None of the romantic bits worked - and while I appreciate the idea of moving onto more serious works, STARDUST MEMORIES was kind of a misfire.

Great review! Stardust is one of my Top 5 Woody Allen movies ever, I love everything about it. That monologue Rampling has, looking into the camera, the editing constantly jump-cutting... amazing.

I love this film. Having finally caught up with 8 1/2 last year, I am curious to see this film again. I think I would get even more out of it than I did the first few times I watched the film. Sure Woody had his mixture of flops in the late 90's/early 00's but there is no denying he has a plethora of stellar films in his canon.

@Sam-It's a film that either Woody Allen fans love or hate but I liked it. I thought it was a great piece of commentary on fame and art.

@Alex-That scene with Charlotte Rampling doing her monologue is my favorite part of the film. I just love that woman and she still looks great. I would still totally want to sleep with her.

@CS-Everyone can have their hits and misses but when Woody has hits and it's good, the dude proves why he is among one of the best working today. When he's bad, it makes you question "what the fuck was he thinking?".

I had tried to write a review of this film years ago that was supposed involve an episode of MTV's Celebrity Deathmatch (anyone remember that). It involved Woody being a special referee in a filmmaker's battle between Quentin Tarantino and Spike Lee as Allen was getting his ass kicked as Lee says, "man, I liked your older, funnier movies more". I was like, "oh, like he hadn't heard that before". Once Soon-Yi told Woody to get back up or no loving tonight, the man snapped and killed Lee and Tarantino. That was funny!

Great review! I love Stardust Memories it's in my top 3 of Allen's movies, it's so enchanting and elegant and that prologue is just briliant.

@Sati-Thank you. I think it's a better film than people give credit for. I love the look of it as well as a lot of those references to 8 1/2