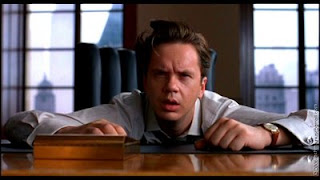 Directed by Joel & Ethan Coen and written by the Coen Brothers and Sam Raimi, The Hudsucker Proxy is the story of a business graduate who starts out as a mailroom clerk and then creates an idea that makes him the president of the company. Meanwhile, a company director decides to create a scam where the young president will take the fall. The film explores the world of ambition as it combines many of the Coen Brothers unique humor and quirks. Starring Tim Robbins, Jennifer Jason Leigh, Paul Newman, Bill Cobbs, Bruce Campbell, John Mahoney, and Charles Durning along with appearances from Coen Brothers regulars John Goodman, Steve Buscemi, and Jon Polito. The Hudsucker Proxy is a sprawling yet witty film from the Coen Brothers.

It’s 1958 as Norville Barnes (Tim Robbins) arrives to New York from Indiana looking for a top job with his business degree. The only problem is that the jobs need experience as he ends up working on the mailroom as a clerk for Hudsucker Industries. On the day he arrives into the building, the company’s founder Waring Hudsucker (Charles Durning) jumps out of a building where the board wonders what to do as directing manager Sidney J. Mussburger (Paul Newman) devises a scheme to implant a moron as company president for the stock to go down so he can buy its controlling interest. When Norville is asked to deliver the infamous blue letter to Mussburger, things go bad as Mussburger uses Norville to become president as stocks start to go down.

With news over Norville’s new role as president of Hudsucker Industries, Pulitzer Prize-winning reporter Amy Archer (Jennifer Jason Leigh) of the Manhattan Argus is assigned to write about Norville as she pretends to be his secretary to find out more about him. During her work posing as Norville’s secretary, she discovers about Mussburger’s plot from the scoop of the building’s clock operator Moses (Bill Cobbs). After a disastrous party with investors, Norville unveils his new idea in the hula-hoop as Mussburger believes it will be the product that will put Hudsucker stock further down. Instead, Mussburger’s scheme backfires when the hula-hoop becomes a smash hit with Norville being the toast of the town much to Mussburger’s dismay.

Norville’s sudden arrogance leads to Amy’s resignation as secretary as he struggles to find new ideas where the building’s elevator operator Buzz (Jim True-Frost) is fired for creating the flexi-straw as Norville claims it’s a stupid idea. Meanwhile, Mussburger makes a discovery through his henchman Aloysius (Harry Bugin) as he uses the secret to overthrow Norville who is condemned as a fraud until he discovers a much bigger secret.

The film is about a naïve business graduate who unknowingly becomes part of a directing manager’s scheme for a business to fail only to backfire when an idea becomes hugely successful. It’s a film that explores the world of corporations and schemes where a board director tries to take control of a company’s stock as he implants this very nice but dim-witted man to become company president so everything would fail. Yet, there’s strange forces such as a fast-talking news reporter and a clock operator who would play with the fates of this young man as the former eventually falls for him.

The script by the Coen Brothers and Sam Raimi does have a bit of formulaic air to the story such as Norville Barnes’ evolution from naïve mail clerk to a smug president who starts to act like the man who is trying to make him look like a fool. Yet, it does manage to work in the way that Norville is portrayed as a guy who just wants to help a company after the death of its founder as he would create an idea that would eventually help the company out much to the dismay of the board and its antagonist Sidney J. Mussburger. Mussburger isn’t a typical villain due to the fact that he’s very smart while slyly plays mentor to the well-meaning Norville and build him up only to tear him down.

Then there’s Amy Archer who starts out as a spy trying to figure out if Norville is the imbecile that people claim to be but she realizes he’s just a pawn for something bigger as she tries to help him become the president the company needed. Though the part about her falling for him is sort of clichéd, it’s what the Coens and Raimi go for since it’s a film that is a tribute to these slapstick comedies as Archer is a character who is quite complex as she sort of acts like a tough broad in the newsroom only to realize that she acts too masculine to fit in with the boys. Despite a few issues with the story, the Coen Brothers and Sam Raimi do create a very entertaining and clever script.

The direction of the Coen Brothers is definitely stylish from the way the board room meetings are shot to the way the mailroom is presented with tracking camera shots to exemplify its chaotic atmosphere. Style is definitely prevalent in the way the Coen Brothers chose to present the film as it features fake newsreel clips along with headlines and all sorts of things to play up Norville’s rise. With Sam Raimi providing some second unit direction for some exterior shots as the film includes a lot of set pieces and an opening crane shot that features New York City presented as miniature sets. The overall work that the Coen Brothers create is truly fascinating as they create a truly superb and engaging film.

Cinematographer Roger Deakins does a brilliant job with the film‘s photography from the way the offices are lit for day and nighttime exteriors to set the mood to the more lavish array of lighting for the snowy climatic scenes in the city. Editor Thom Noble does a nice job with the editing to play up the sense of style while creating dazzling montages of Norville’s rise to success. Production designer Dennis Gassner, with set decorator Nancy Haigh and art director Leslie McDonald, does a fantastic job with the set pieces created such as the offices of Norville and Mussburger to the room in between where the building’s clock is being operated.

Costume designer Richard Hornung does fabulous work with the costumes from the suits that the men wear to the stylish dresses that Amy wears to play up her tough personality. Visual effects supervisor Michael J. McAllister and miniatures supervisor Mark Stetson do amazing work with the visual effects creating including the film‘s opening shot and the scene involving Waring Hudsucker‘s suicide fall. Sound editor Skip Lievsay does terrific work with the sound from the way the clocks sound inside to the chaos of the party, mailroom, and newsroom scenes.

The film’s score by Carter Burwell is excellent for its playful pieces for the film’s humor to more soaring orchestral arrangements that play up Norville’s triumphs and other suspenseful, dramatic moments in the film. The film’s soundtrack also includes an array of standards from Duke Ellington and Grace Bumby to classical music from Georges Bizet, Frederic Chopin, Luigi Boccherini, Peter Tchaikovsky, and Aram Khachaturian.

The casting by Donna Isaacson and John S. Lyons is great for the ensemble that is created as it includes cameos from Coen Brothers regulars like Steve Buscemi as a beatnik bartender, Jon Polito as a businessman-in-waiting, and John Goodman as the voice of a newsreel man. Other notable appearances include Peter Gallagher as a lounge singer, Mike Starr as a news reporter, Patrick Cranshaw as an aging mail sorter, Bruce Campbell as a news reporter Amy likes to slap around, and notorious Playboy Playmate Anna Nicole Smith as a bombshell Norville was linked to. Standout small but noteworthy supporting parts include John Mahoney’s as Amy’s news-grabbing editor, Harry Bugin as Mussburger’s silent henchman Aloysius, Bill Cobbs as the wise and informative clock operator Moses, Jim True-Frost as the fast-talking elevator operator Buzz, and Charles Durning in a small but very memorable part as Warring Hudsucker.

Jennifer Jason Leigh is great as the fast-talking and snooping reporter Amy Archer who sports a very exaggerated accent as Leigh brings great humor and charisma as the woman who unlikely falls for Norville. Paul Newman is outstanding as the smarmy Sidney J. Mussburger who tries to scheme his way into taking over Hudsucker Industries as he brings a wonderful sense of charm and bravado to the character. Finally, there’s Tim Robbins in a wonderful performance as Norville Barnes as he brings a boyish persona to a guy that hopes to do great only to be a pawn in a scheme as Robbins exudes some humor and humility into the role.

The Hudsucker Proxy is an extraordinary film from Joel and Ethan Coen. Featuring marvelous performances from Tim Robbins, Jennifer Jason Leigh, and Paul Newman, it’s a film that is very entertaining despite the fact that there’s more style than substance. Still, it is a joy to watch and never has a dull moment while not pretending to be this very extravagant period piece. In the end, The Hudsucker Proxy is an enjoyable film from the Coen Brothers.

Man,I love this film!! And this is one of the underrated Coens film I think.The characters here are all funny in a special way,the Norville Barnes character really is Robbins' type.

It looks splendid and the cast is obviously very good but for some reason, this is one of the very rare films where it seems like The Coens are just phoning it in a tad bit. Still, good flick and good review Steve,

@David-I had low expectations watching this and ended up enjoying. Did you know that producer Joel Silver wanted Tom Cruise for the part of Norville? That wasn't going to work. Tim Robbins was perfect.

@Dan-I don't think the Coens were phoning it although it was quite ambitious. I was surprised for the fact that of all the films they've edited, it's the one film where they didn't edit it themselves.

I'm in the minority, but I love this film. In some cases I love it more than other, more celebrated Coen Brothers films.

Jennifer Jason Leigh really makes the movie for me. She's channeling Rosalind Russell's Hildy Johnson character from His Girl Friday and she nails the fast, no nonsense reporter talk.

@Chip Lary-I think it's a film that deserves more exposure. It's a bit different and it's got a lot of ambitions. Yet, it's very entertaining. I really do love Jennifer Jason Leigh. She made the film for me.