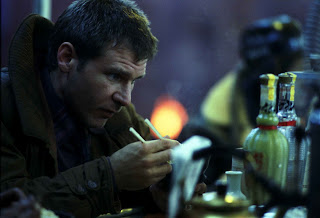 Based on a novel by Phillip K. Dick (whom the film was dedicated to), Blade Runner is a stylish, film-noir detective story set in the futuristic 2019 Los Angeles about a retired cop who returns to the scene to eliminate four murderous androids known as replicants. Directed by Ridley Scott and adapted into script by Hampton Fancher, David Peoples, and Darryl Ponicsan, the story is set in traditional film-noir with elements of character studies, conflict, and dark humor that only Ridley Scott can come up with. With a cast that includes Harrison Ford, Rutger Hauer, Sean Young, Daryl Hannah, Edward James Olmos, M. Emmet Walsh, Brion James, and Joanna Cassidy. Blade Runner is a brilliant yet dark film from Ridley Scott.

It's 2019 in Los Angeles where the world is overtaken with many wondering who are the humans and who are the replicants. The latter of which, lives in a colony owned by a corporate head named Tyrell (Joe Turkel) as a new replicant named Leon kills an interrogater named Holden (Morgan Paull) as he escapes with three new replicants. A former blade runner named Rick Deckard (Harrison Ford) is contacted by a replicant named Gaff (Edward James Olmos) where Deckard is asked by his former superior Bryant (M. Emmet Walsh) to hunt down the four escaped replicants. Deckard takes the job as he meets Tyrell and his assistant Rachel (Sean Young) where Tyrell reveals information on the new replicants led by Roy Batty (Rutger Hauer). After asking Rachel some questions to see how the interrogation process happens, Rachel divulges something that adds to Deckard's suspicions.

The four replicants arrive to Los Angeles where Leon and Batty search for the inventor J.F. Sebastian (William Sanderson) while Deckard begins his investigation as he finds one of them in a woman named Zhora (Joanna Cassidy). Deckard later receives a visit from Rachel who asks about her interrogation and the images of her head as she wonders about her true self leaving Deckard confused. While being pursued by Bryant and Gaff, Deckard gains information from Chew (James Hong) about the replicants and what they're after. A young woman named Pris (Daryl Hannah) meets Sebastian as they befriend each other while Deckard finds one of the replicants as Rachel becomes a suspect. With Pris introducing Sebastian to Batty, they reveal what they from Sebastian as Deckard also learns about what Rachel is going through. This would lead to an all-out battle where Deckard has to make choices as he deals with the psychotic Batty.

With a wonderful screenplay that is filled with playful one-liners and stylish subtext, the credit goes to director Ridley Scott for bringing his visual approach to storytelling on the forefront. He brings in a mix of Asian cinema, classic film-noir, and post-modern sci-fi all into a stylish, grand spectacle with bleak settings. In his technical brilliance, Scott's use of slow-motion shots, entrancing camera angles, and eerie settings shows his brilliance to convey moods onto a single frame. Clearly, his inspiration was in film noir since the film is partially inspired by classic detective stories and it shows the brilliant range of Scott. He evens adds a bit of humor to balance out the film, even with the script that has that one famous line, "Wake up, time to die" along with some memorable one-liners.

In the acting, Scott relies on the script as his source and with the script, he helps conveys the tortured soul of Deckard along with a complexity of what he might or might not be. Even the villains, notably Batty has a complexity that isn't stereotypical of villains seen before and since. There's not many themes other than the post-apocalyptic world of human replicants trying to wipe out the human race. It's more about trying to figure out what you are, even if the life span is very short. While the love story of Deckard and Rachael might seem to be added on, it has depth since it's something that Deckard can fall back on, even if the timing is brief.

If Ridley Scott achieves himself on the technical side, many credit goes to his film crew, whom Scott has often relied on. Cinematographer Jordan S. Cronenweth brings a vast outlook with noir-like lighting textures in several interior, night scenes, and the neon lighting helps give the film its Asian, post-modern look. Production designer Lawrence G. Paull and art director David Snyder help bring that vision to life with their use of big screens, Asian architecture in the seedy L.A. world, and that grand, posh look of Tyrell's world as the film remains in its futuristic outlook. Helping out in the visuals is Douglas Trumbull who brings in great special effects for many of the film's visual sequences involving flying cars and the world of Tyrell. With editor Terry Rawlings bringing a nicely-paced feel to the film, the movie doesn't lose sight of its outcome or makes anything boring. Then there's the creepy electronic score of Vangelis who just uses hypnotic textures and atmospheres to bring the future closer to the screen with each note bringing more suspense as the film progresses.

Then you have the amazingly, talented cast that is brought to the film. While Joanna Cassidy and the late Brion James had small, villainous roles, they each do have memorable moments, notably James early in the film and in the scene where he says, "Wake up, time to die". William Sanderson is wonderful in his innocent role as Sebastian with his reclusive stature and childlike approach to the performance while Joe Turkel is excellent in his eccentric, calm performance as the dark creator Tyrell. While Edward James Olmos doesn't have much to do in the film, he is very memorable as the replicant Gaff with his weird smile and even stranger lines, including the final one as he brings some of the dark humor to the film. Noted character actor M. Emmet Walsh is excellent as Deckard's former superior who brings in a bit of sleaze and humor to a very memorable performance. Sean Young is wonderful and complex in her subtle role as Deckard's replicant love interest but it's Daryl Hannah who really stands out in her small role as one of the evil replicants with her girlish innocence and crazy personality where she gets into some intense action.

Rutger Hauer gives a great performance as the villainous yet complex Roy Batty. Hauer uses his charm, wit, and face to give a villain that many will remember while making him more depth-driven than other villains. Hauer makes sure his character isn't just a totally evil man but one who knows what he wants. Even in the final moments of the film, Hauer brings in some of his best acting into the forefront as you can see why he's a cult favorite among film buffs. Harrison Ford delivers one of his best performances as Rick Deckard with a mix of weariness and determination. While he's playing the hero, he makes sure it's one that people can relate to since he has no desire to kill but when he's brought back, it's only with reluctance. Ford doesn't make himself the usual tough guy in some of the fight scene he's in. He's not Han Solo or Indiana Jones but a man that has a lot of problems. Ford makes sure that Deckard is one that an audience can sympathize with while we root for him in his quest to stop the bad guys.

Blade Runner is a visually-exotic yet haunting film from Ridley Scott that features a marvelous performance from Harrison Ford. Along with amazing technical work as well as superb ensemble cast that includes Rutger Hauer, Sean Young, Daryl Hannah, M. Emmet Walsh, and Edward James Olmos. It is truly one of the great sci-fi films ever created due to its visual effects as well as an entrancing story. In the end, Blade Runner is a magnificent sci-fi noir film from Ridley Scott.

When I first watched it,I had no idea what it was about.But after that,people kept saying great things about it,and some claimed it to be the greatest sci-fi ever,which made me decide to re-visit it some day.

I posted a long comment on another blog who posted a review of this. I forgot it was the MOTM. Rather than copy the same comment here I will just say that I've seen this film three times over the years, but have never completely bought into the praise, and I've seen both theatrical and director's cuts. Having read so much science fiction when I was younger, the concepts in the film were not new and original to me, so that removed a big reason that so many movie goers have liked it. I like it well enough, but I don't love it.

@David-I've only seen the 1992 Director's Cut back in 2005. It's been a very long time I've seen it. I still love it though I'm now getting confused which version is the most preferred one. I hope to revisit it soon as well.

@Chip-I can understand your reasons. I'm not entirely familiar with the world of sci-fi but you've stated a very valid case into why you don't think it's that great. Why couldn't the assholes at Epinions.com be this articulate?