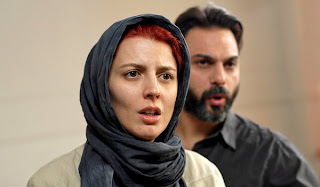 Written and directed by Asghar Farhadi, A Separation is the story of a middle-class Iranian couple whose separation is halted by various issues as the husband tries to take care of his ailing father while the wife wants to leave Iran with their 11-year old daughter for a better life. The film explores the world of couples whose marriage is in collapse as a woman tries to petition for divorce in a world that is very strict. Starring Leila Hatami, Peyman Moaadi, Shahab Hosseini, Sareh Bayat, and Sarina Farhadi. A Separation is a mesmerizing yet haunting drama from Asghar Farhadi.

With a desire to leave the strict rule of Iran, Simin (Leila Hatami) and Nader (Peyman Moaadi) are set to leave the country with their soon-to-be 11-year-old daughter Termeh (Sarina Farhadi). When Nader’s father (Ali-Asghar Shahbazi) is ill with Alzheimer’s and Nader wants to stay to take care of him, Simin is upset leading to a breakdown in their marriage. After trying to go to a judge to petition for divorce, the plan fails as Simin still wants to leave Termeh as they only have 40 days left or they won’t get another chance. Simin leaves to live temporarily with her parents while Nader hires a young pregnant woman named Razieh (Sareh Bayat) to help take of his dad while he is off at work. Yet, Razieh is already a religiously-devout woman living in a poor suburb with a daughter named Somayeh (Kimia Hosseini) as she has to deal with her husband Houjat (Shahab Hosseini).

The job turns out to be a lot for Razieh as things eventually got complicated when Nader’s father walked out of the house wanting to get the newspaper. On the next day, Razieh was out with Somayeh when Nader and Termeh found his dad lying on the floor and his arm tied to the bed. Razieh returns where an argument between her and Nader over lost money and Nader’s dad led to some issues where Razieh was sent to the hospital as Nader and Simin had to deal with Houjat. A court hearing occurs between Nader and Razieh over what happens as Nader faces one-to-three years for the incident as Termeh’s teacher Miss Ghahaeri (Merila Zarei) testifies only to deal with the more unstable Houjat.

Things escalate as Termeh makes her own testimony as Simin decides to make a deal to Houjat for the sake of Termeh. Yet, a discovery about what really happens as well as doubts leave everyone shaken over everything that has happened.

The film is about a couple separating after 14 years where a man needs help to care of his ailing father while the person who would care for him end up getting more than she bargains for leading to a war where the man’s estranged wife has to come in. In the middle of these accusations filled with lies, anger, and motives, a young girl is caught in this war between two different couples as she tries to cope with her parents’ separation. Notably as she has to be involved to try and save her father as she is later torn apart by her own actions.

Films about dissolving couples with a child involved often lead to very dramatic touches that reaches into the heights of melodrama. What Asghar Farhadi creates is not a typical divorce film with a child but rather an exploration into a couple’s dissolving marriage as a man tries to do what is right while his estranged wife later tries to help him out when he’s in danger for the sake of their child. Even more intense is the fact that Nader’s pride is kind of his downfall as he refuses to back down against something he believes he did nothing wrong though he admits he was angry because he was concerned for his father. Though Simin knows why he doesn’t want to leave, she wants to leave to live a better life outside of Iran and give her daughter something much better.

This leaves a character like Termeh to be stuck in the middle despite being much closer to her dad until the complications over his situation with Razieh starts to become complicated as she has to get involved. Farhadi doesn’t create characters who are this or that but rather people who are human where they have good intentions but their motives and feelings end up complicating matters. Notably Razieh who is this very religious woman who becomes more confused by what has happened to her as she seeks some sort of justice. Her husband Houjat wants the same as he also wants money so he can pay off some debt to money lenders. All of this is further complicated by Iranian law as there’s a three-year jail sentence hanging at Nader’s head while more complications are furthered as Simin wants to leave but is running out time as she couldn’t re-apply to leave Iran.

The screenplay that Farhadi creates is truly intoxicating in the way these characters behave and try to figure out everything that is happening as a couple’s marriage is dissolving in front of their daughter’s eyes. Yet, it’s the direction of Farhadi that is very ravishing to watch in the way he presents everything. Shot in a cinema verite style, the film is presented where the camera is at the center of everything that is happening with a lot of hand-held shots to observe the events that unfold throughout the film. Notably as the camera is often inside a car or in the middle of a conversation where it’s always there to see what is happening or looking from afar.

One of Farhadi’s key gifts as a filmmaker is the way he has his actors placed in the frame. Often utilizing some form of two-shots or shots with multiple characters, he’s always trying to observe the drama that happens in the film. Notably in the way he sets up conversations, court room scenes, and other moments where it’s all about the dialogue and the actions that occur in these scenes. The film’s final moments where things start to wind down but also some harrowing revelations start to come out lead to a very powerful and heartbreaking ending as Farhadi presents these last scenes in a very simple composition without doing much but rather just have the camera be placed at this particular moment. Overall, Farhadi creates a truly visceral yet heartbreaking film about divorce and motivations to try and save a family.

Cinematographer Mahmoud Kalari does an excellent job with the film‘s cinematography from the colorful locations of downtown Tehran in the daytime to the nighttime exteriors along with more straightforward interior shots to help intensify the drama. Editor Hayedeh Safiyari does a brilliant job with the editing in utilizing a few jump cuts to keep the film‘s leisured pace going along with some rhythmic cuts to capture the intensity of some of the heavy, dramatic dialogue that occurs in the film. Production designer Keyvan Moghaddam does a nice job with the set pieces created from the middle class home of Nader to the more claustrophobic look of the courtrooms that Nader and Razieh battle at.

Sound designer Mohammed Reza Delpak and sound editor Reza Narimzadeh do some terrific work with the sound to capture the intimacy of the apartment scenes to the more raucous world of the courtroom buildings that is often filled with shouting outside of the courtrooms and such. The film’s score by Sattar Oraki is very good as it only appears in the film’s final credits which is this delicate yet haunting piano piece to emphasize all that had happened in the film.

The film’s ensemble cast is truly incredible for the work that is displayed on screen as it includes some notable small appearances from Babak Karimi as the court interrogator, Shirin Yazdanbakhsh as Simin’s mother, and Ali-Ashgar Shahbazi as Nader’s ailing father who can barely speak. Merila Zarei is very good as Termeh’s tutor Miss Ghahraei who finds herself in an unwanted war while Kimia Hosseini is a delight to watch as Razieh’s daughter Somayeh whom Termeh likes and sympathizes for as she has no idea what is really going on. Shahab Hosseini is excellent as the emotionally-troubled Houjat who is desperate to find justice for what happened to his wife while needing money to pay off debts.

Sareh Bayat is wonderful as the religious Razieh who finds herself in a situation where she becomes a victim as she also seeks justice while later becoming confused over her beliefs as things become complicated. Sarina Farhadi is amazing as the conflicted Termeh who tries to deal with everything that happens while helping her father out where she would be forced to make compromises. Leila Hatami is superb as Simin as she tries to deal with the divorce and her own desires to leave Iran while helping out Nader in his issues as she becomes a woman filled with conflict. Finally, there’s Peyman Moaadi in a remarkable performance as Nader where Moaadi brings a very compelling approach to a man that wants to protect his daughter and deal with all sorts of trouble as Moaadi displays great vulnerability to his character.

A Separation is a rich yet harrowing film from Asghar Farhadi that features towering performances from Leila Hatami and Peyman Moaadi. The film is definitely unlike a lot of divorce and courtroom dramas due to the moral and human conflicts that occur in a world that is foreign to Western audiences. It’s also a film that indicates how far Iranian cinema can go beyond the limitations of its politics and religion without creating some form of stereotypes in its characters without also making them into saints. In the end, A Separation is a truly powerful drama from Asghar Farhadi.

Superb review! I'm seing it this week! I'll get back with juicier comments very soon!

Thank you. I hope you enjoy the film.

Great review! I liked the movie a lot, it was very dynamic for a drama and it definetly established very strong characters thanks to the wonderful script.

@Sati-If I had seen the film before the Oscars, it would've been my pick to win that Best Original Screenplay Oscar.

At least he got nominated and lost to Woody Allen.

Asghar Farhadi is like emerging from nowhere to me,have you seen his previous works?

@David-You know something. After seeing this film, I'm eager to see everything else he's done prior to this.