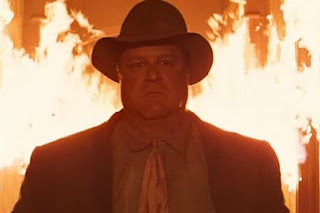 Written and directed by Joel and Ethan Coen, Barton Fink is the story of a pre-World War II playwright who moves to Hollywood to write a script for a B-movie studio. During his stay in a Hollywood hotel, he encounters strange oddities as well as individuals who help shape the script as faces pressures to give in to the trappings of Hollywood. The film explores the world of the writer and his attempt to create something meaningful in a world where he’s writing to satisfy others. Playing the titular character is John Turturro in his second collaboration with the Coen Brothers. Also starring John Goodman, Judy Davis, Michael Lerner, John Mahoney, Steve Buscemi, Tony Shalhoub, and Jon Polito. Barton Fink is an extraordinary film from the Coen Brothers.

After scoring another hit on Broadway, playwright Barton Fink becomes a success as he tries not to take the praise seriously. His friend Garland Stanford (David Warrilow) asks Fink to go to Hollywood for a week to write a script for the B-movie studio Capitol Pictures to the tune of $1000. Fink isn’t sure thinking it would betray everything he writes about but eventually decides to as he checks into a strange hotel run by a resourceful bellhop named Chet (Steve Buscemi). Meeting with studio head Jack Lipnick (Michael Lerner) and his assistant Lou Breeze (Jon Polito), Fink is asked to write a movie about pro wrestling as Fink has no clue about the world of pro wrestling. He later meets with fast-talking producer Ben Geisler (Tony Shalhoub) about what to do with a pro wrestling film.

At the hotel, Fink meets his neighbor in a big traveling salesman named Charlie Meadows (John Goodman) as the two become friends while Meadows help Fink out with the world of pro wrestling. Despite dealing with writer’s block and overwhelmed with meeting Geisler, Fink bumps into famed novelist W.P. Mayhew (John Mahoney) as the two have lunch the next day with Mayhew’s secretary/lover Audrey Taylor (Judy Davis). The lunch is a disaster due to Mayhew’s alcoholism as Fink continues to deal with writer’s block and more meetings with Lipnick and Geisler. At one particular night, Audrey visits him at his hotel as she reveals to Fink some secrets about Mayhew as she helps him with his script.

Later that morning, something bad happens as Fink asks for Meadows’ help where Meadows manages to take care of things while revealing he had to leave for New York for business. Fink becomes inspired to write a script as he later deals with two detectives named Mastrionotti (Richard Portnow) and Deustch (Christopher Murney) who are looking for a madman named Mundt. Fink finds himself in trouble as he tries to come to terms with his role as a writer.

The film is essentially about a playwright who writes about the common man going to Hollywood where he would be compromised as he deals with writer’s block and encounter strange things in the seedy hotel that he’s staying in. Among them is this mysterious neighbor who makes loud noises while would help him explore the world of pro wrestling that he’s supposed to write about. It is a film about writing and how writers try to put their own voice into a story when someone is telling them that they’re supposed to do this and that. It’s also an exploration into the world of writer’s block as the film’s titular character deals with it head on because he has no idea how to write for other people when he was known for writing for himself.

The screenplay that Joel and Ethan Coen create explores a man being compromised while he would also meet another revered writer whom he’s fond of only to realize that he’s not the man that he idolized. Notably as his secretary would reveal secrets that would further destroy that myth as she would help Barton Fink find his voice into writing this screenplay about wrestling. What the Coen Brothers also do is create this world where the writer is believed to be king but they’re only to serve a higher purpose for a studio as Fink would have a hard time trying to find voice in this world that he is so foreign to while he wants to remain grounded and not give in to adulation. The script is a character study about a man’s motivation to be a writer while dealing with all sorts of trapping in being loved by critics but also have Hollywood build him up only to anticipate tearing him down.

The direction of the Coen Brothers is truly a marvel to watch in the way they create the world of 1940s pre-World War II Hollywood as they show a contrasting world of where Barton Fink is. Whereas Fink lives in this very dilapidated hotel where wallpapers are peeling off the wall, mosquitoes appear quite often, and there’s annoying bellhop who is often to helpful named Chet. The world that he steps into is very rich and there’s a lot out there as it’s to exemplify the world that Fink could be apart of he just writes for what they want him to do. This establishment of the differing worlds that Fink encounters as Coen Brothers emphasize what Fink could have when really, neither the hotel he’s living in nor the world of the rich, successful writers and studio kingpins aren’t that great.

Through these entrancing shots of the hotel hallways and lots of rapturous compositions, the Coen Brothers create a film that is quite engaging while also making fun of Hollywood a bit. Another highlight of their direction is the way they guide actors by having them into a frame or to direct a conversation where it’s about the rhythm. The scenes involving Fink and Lipnick are rich in the way the Coens capture the intensity and drama of these conversation not just in the framing but also in the way the editing times these cuts as the Coens do amazing work in the editing under their moniker Roderick Jaynes. Other moments such as the climatic moment involving the two detectives in a fiery hallway represent the Coens just going all-out. It’s truly a film that isn’t like any other film as the Coen Brothers create what is undoubtedly a film for the ages.

In his first collaboration with the Coen Brothers, cinematographer Roger Deakins does a truly spectacular job with the film’s photography who creates a vastly wonderful look in the film’s hallway and hotel interiors to establish a tone while the exteriors of the California sun exemplify a world that is rich as Deakins’ work is truly phenomenal. Production designer Dennis Gassner, along with set decorator Nancy Haigh and art directors Richard C. Goldstein and Leslie McDonald, do fantastic work with the set pieces created as it includes the hotel that Fink and Meadows were staying in to the lavish homes and places that Fink embarks in as he explores Hollywood.

Costume designer Richard Hornung does a fantastic job with the suits and hats many of the men wear from the 1940s including the more calm yet stylish dresses that Audrey wears. Sound editor Skip Lievsay does a superb job with the sound work from some of the intimate exterior conversation scenes to the sound of Meadow‘s screams that is heard throughout the hotel early in the film. The film’s score by Carter Burwell is magnificent for its array of orchestral scores played in the film ranging from sprawling to more delicate arrangements to play with the differing moods of the film as the soundtrack also includes some pre-World War II music of the time.

The casting by Donna Isaacson and John S. Lyons is amazing for the ensemble that is created for the film. Among those making appearances is the Coen Brothers’ former cinematographer Barry Sonnenfeld as a page boy and Frances McDormand in a voice cameo as a stage actress. Notable small roles include David Warrilow as Barton’s sell-out spouting friend Garland Stanford, Richard Portnow and Christopher Murney as two intimidating detectives, Jon Polito as Lipnick’s supportive assistant Lou Breeze, and Steve Buscemi in a funny performance as the bellhop Chet. John Mahoney is excellent as the William Faulkner-based writer W.P. Mayhew while Tony Shalhoub is superb as the fast-talking and insult-spouting Ben Geisler.

Judy Davis is very good as Mayhew secretary/lover Audrey who reveals to Barton some harsh truths about Mayhew while becoming the one ally he has in the world of writing. Michael Lerner is brilliant as studio head Jack Lipnick who tries to champion Fink while getting him to write the movie as it’s a very charismatic performance for Lerner. John Goodman is terrific as the brash yet helpful Charlie Meadow who befriends Fink and helps him deal with stuff while proving to be a very loyal and tough friend. Finally, there’s John Turturro in an outstanding performance as the titular character. Sporting a weird hairdo, Turturro brings a real sense of humility and passion to a man being compromised as a writer while struggling to find a voice in the work he’s making as he has to endure all of these strange forces. Notably as he is a man lost in a world that tries to make him conform so he can be like everyone else as it’s definitely the best performance Turturro gave in his career.

Barton Fink is a triumphant and mesmerizing film from the Coen Brothers featuring a tour-de-force performance from John Turturro. The film is definitely one of the Coen Brothers’ top films of their career as it’s funny, thrilling, and dramatic. Along with a great ensemble cast and top-of-the-line technical work, it’s a film that truly explores the mind of a writer as well as exploring the theme of compromises and ambition. In the end, Barton Fink is a dazzling yet glorious film from Joel & Ethan Coen.

"I want that Barton Fink feeling!"

I have mixed feelings on this one. It's really slow for the first hour and ten minutes then it becomes really interesting. I always smile when I see some Se7en fanboy write about how original the scene with the box is and I always think of this film.

The scene that will be seered in my brain (no spoilers, and pun intended) is the man running down the hall toward the camera while the hallway is bursting into flames.

This is still my favorite Coen Brothers movie. It's the most realistic as far as what writers go through as I write screenplays but not frequently.

It is my 2nd fav Coen films(fav being The Big Lebowski).I love the way they present the writer's block in a surrealistic style.The cut from slapping a mosquito to massive blood is genius!!

What do you think is in the box?

Great review! I loved the cinematography and the feel of the movie, but I found it to be a little slow, it's not my favorite from the Coens but it's definetly very unique picture.

@David-what do I think is in the box... someone's head.

Terrific and detailed review! I will see this soon because I love COen brothers and the cast seems brilliantly assembled.

@FilmMaster-Thank you. I hope you enjoy the film.