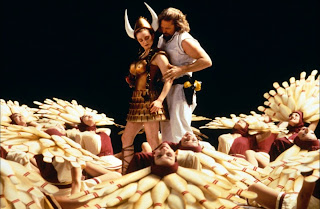 Written, produced, and directed by the Coen Brothers, The Big Lebowski is a wonderful tale set in the early 1990s about a lazy stoner named Jeff Lebowski, nicknamed The Dude, who through all of his life, likes to drink White Russian, play bowling with his pals, and smoke some fine grass in his Los Angeles home with a rug, a rug that really tied the room together. Then amidst some confusion, he is mistaken for another Jeff Lebowski as criminals urinated on his rug, the rug that really tied the room together, as he seeks compensation from the other Lebowski, a richer, elder man. The Dude ends up being part of a scam where he's involved with Lebowski's artistic daughter, nihilists, porn producers, and many more as he and his buddy Walter do what they have to do to save the day.

The Dude comes home to chill until a couple of thugs come in and urinate his favorite rug because he's Jeff Lebowski. Yet, he's not the millionaire Jeff Lebowski (David Huddleston) whose young wife Bunny (Tara Reid) has amassed a huge debt owed to porn film producer Jackie Treehorn (Ben Gazzara). The Dude talks to his ex-Vietnam vet friend Walter Sobchak (John Goodman) and their bowling buddy Donny (Steve Buscemi) about the incident as the Dude wants compensation for his rug. After getting in contact with Mr. Lebowski's assistant Brandt (Philip Seymour Hoffman), the Dude meets with Mr. Lebowski who is already angry over Bunny as he later steals a rug where he would meet Bunny and a nihilist named Uli (Peter Storemare). Things seem fine as the Dude is preparing himself for an upcoming bowling tournament until Brandt calls him about Bunny being kidnapped as Mr. Lebowski wants the Dude to give the kidnappers the ransom money with a 20 grand fee for the job.

The Dude and Walter make the drop-off though Walter is convinced that it's a cover-up as they bungle the drop-off where the Dude is later confronted by a mysterious woman who knocks him out as he loses his rug. Things worsen as the Dude, Walter, and Donny are threatened by a crazed bowler named Jesus (John Turturro) while the Dude is followed by a mysterious man (Jon Polito) in a Volkswagen. The Dude gets a call from the mysterious woman who is revealed to be Mr. Lebowski's daughter Maude (Julianne Moore) who is an avant-garde artist as she gives the Dude some information. After another meeting with Mr. Lebowski and Brandt that becomes disastrous due to the bungled drop-off as the Dude finds his stolen car and later deals with Uli and a couple of nihilists in Kieffer (Flea) and Franz (Torsten Voges). After another meeting with Maude and her friend in video director Knox Harrington (David Thewlis) that involves a film produced by Jackie Treehorn. The Dude is then forced to meet with Jackie Treehorn as he's accompanied by the thugs who peed on his rug.

The meeting with Treehorn turns strange as the Dude is tortured over information as he is drugged into having a surreal dream involving Maude. The night worsens following a meeting with a sheriff (Leon Rossum) as the Dude meets with Maude again who reveals more key information. This would lead the Dude and Walter to make more moves in another night full of hilarity.

Now for anyone aware of the all the plot implications and catchy dialogue that the Coen Brothers have is sometimes filled with intelligence and ideas to think about. Well, this film doesn't have any sense of intelligence or ways to move you emotionally. Nope, this is pure low-brow comedy at its finest and who better to conceive this masterpiece of slacker humor with elements of stoner comedies better than the Coen Brothers. There's no sense of character study or morals in here. The film is simply about a lazy stoner who becomes a hero, or a loser, or both Plus, it's a buddy comedy where the stupid guy is helped by an even dumber guy. It's not brain surgery or some kind of typical Academy Award-winning script. No, it's just a simple, hilarious, flat-out, laughing-your-sick-fucking-ass-off kind of comedy.

In many respects, if Fargo was the duo aiming high, this film was the duo aiming low and in a great way. Still, the Coen Brothers manage to reference everything they've done before where for example, Steve Buscemi's character in Fargo never shuts up while the character of Donny never really gets a chance to talk. In many ways, the Coen Brothers are just having fun where the film's script that is accompanied a bit by the rambling narration of a sarsparilla-loving cowboy called the Stranger played by Sam Elliott. The script is built to create each funny moment and situation with rambling dialogue that just makes the audience care or laugh at the Dude with or without his cohorts.

Joel and Ethan Coen's direction is filled with the traditional camera angles while he presents some hilarious sequences. Notably the film's fantasy sequences which features a Saddam Hussein look-a-like giving the Dude some bowling shoes. The fantasy sequences are surreal yet witty in the Dude's adventures. Even the aura of mystery surrounding the whereabouts of Bunny reveals that despite his laziness, the Dude isn't a total idiot who has morals while the mystery angle works to help carry the comedy. Coen's direction brings a presentation of Los Angeles that is strange and zany for all the surroundings of the Dude.

Helping the Coen Brothers in their unique vision is their longtime cinematographer Roger Deakins. Deakins' work is filled with wonderful lighting in the brightness of the bowling scene while capturing the upper-class world of the film's interior settings. For the exterior settings, Deakins uses the flashy colored lights of the pool and the bowling alley stars to brings a surreal, colorful atmosphere for the surroundings of Los Angeles to complement the Dude in his stoned state. Production designer Rich Heinrichs helps create the contrasting world of upper-class and lower-class Los Angeles while giving a wide look for the film's bowling scenes as well the surreal fantasy sequences for the Dude. Longtime costume designer Mary Zophres also does great work in the film's costumes, notably in the costume sequences where Julianne Moore wore two bowling balls as a bra while most of the clothes the Dude wears is actually the clothing Jeff Bridges own. To think that a rich, successful actor like Jeff Bridges could actually afford some decent clothes instead of the cheap ones he wore as the Dude.

In their alias as Roderick Jaynes, the Coen Brothers with Ethan's wife and editor Tricia Cooke brings a nice, leisurely-paced style to the film's editing while the film's tight cutting help the scenes move along nicely, particularly the segue to the fantasy sequences. Jaynes and Cooke does some great work with the editing with the help of longtime sound editor Skip Lievsay who does some excellent sound work to help out in the film's strange atmosphere to play with its humor. Longtime composer Carter Burwell does some excellent score work with his orchestral arrangements to play up to the film's intensity in its mystery subplot while some more playful textures to the film's comedy. Most of the film's music is supervised by T-Bone Burnett who created a rich soundtrack to play up to the world of the Dude.

The soundtrack includes an array of great cuts filled with such classic rock music from Creedence Clearwater Revival, Bob Dylan, Santana, Booker T & the MGs, Townes Van Zandt, and Elvis Costello plus a couple of cuts from the Eagles. A cover of Hotel California by the Gypsy Kings and another song from the band where it had a scene of the Dude saying he hates the fucking Eagles. There's also some nice jazz cuts from Nina Simone, Dean Martin, Debbie Reynolds, and a cut from the Sons of the Pioneers that opens the movie. There's also a great cut in a fantasy performed by Kenny Rogers & the First Edition that is very surreal yet fun to watch with the music. Burnett's choice of music is brilliant and its easily one of the best soundtracks ever which also includes two covers of Viva Las Vegas by ZZ Top and Shawn Colvin.

Ben Gazzara is excellent as the sleazy but charming porn producer Jackie Treehorn with his coolness and business-like presence. Coen regular John Turturro's small performance as Jesus is truly one of the best small roles ever as Turturro brings a lot of funny creepiness and antics that are so memorable to watch while he does a great Spanish accent. Another Coen regular in Steve Buscemi is also funny as the nice but often interrupted Donny who always tries to get into a conversation but ends up being a great comedic prop as Buscemi played the role perfectly. Philip Seymour Hoffman gives a great, straight performance as Mr. Lebowski's assistant Brandt with such restraint and manner as Hoffman plays the role in the straightest way as he comes off as the most straight person in the film. Sam Elliott is very funny as the Stranger whose rambling narratives often lose track while his voice is very laid back and often talking about sarsparilla. David Huddleston is great as Mr. Lebowski with his mean-like presence that is big as Huddleston really stands out.

Julianne Moore gives her most pretentious performance to date as Maude Lebowski as Moore plays the role with sheer fun while creating a mock-European voice to give the character a lot of humor. It's Moore's funniest performance overall as she brings a lot of snobbery as Moore parodies the art world with her great performance. Coen regular John Goodman is truly perfect as Walter with his stickler to the rules and his misreading of information. Goodman has a great, cartoon-like army look that is truly Walter and no one could play that role better than him. Goodman has great chemistry with Bridges as they make one of the best comedies duo of all-time.

Finally, there's Jeff Bridges in what is truly, a role that he is born to play as the Dude. Bridges before the Dude was always wonderfully dramatic and showing a lot of his range in his roles. Once he is the Dude, Bridges looks like he has a lot of fun as the Dude with his laid-back persona while trying to do things right although he never does. Bridges never makes his character truly pathetic yet he's so much fun to watch that he becomes an unconventional hero. If there's one film performance Bridges will be remembered for, it'll be as The Dude.

If there's only one film to see from the Coen Brothers, it's The Big Lebowski. Thanks to the performances of Jeff Bridges, Julianne Moore, Ben Gazzara, Sam Elliott, David Huddleston, Phillip Seymour Hoffman, and Coen regulars John Goodman, Steve Buscemi, Jon Polito, John Turturro, and Peter Stormare. The film is without a doubt a classic stoner comedy. While it's not for high intellectuals who want a plot, it's for anyone who just doesn't care and just wants to laugh. So in the end, grab some White Russians, some grass, call a few bowling buddies, and have a good time watching one of the greatest movies of all-time, The Big Lebowski.

Finally comes the Dude,But I do think Steve Buscemi character is the core one here.

The dream sequences are truly amazing,I'm always wondering if they took dope during the shooting.

Awesome review for awesome film. I really love it and can watch it over and over again, I loved the chemistry between actors and both Bridges and Goodman delivered amazing performances.

@David-I wondered if they were all on dope for the production of that film. It would've made it more fun.

@Sati-It's one of those comedies where if it's on TV, you need to watch it. It's a classic.