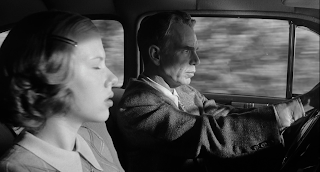 Written, produced, and directed by Joel & Ethan Coen, The Man Who Wasn't There is about a quiet, rigid barber who suspects his wife of having an affair with her boss. When he gets into a scam-deal, he blackmails his wife's lover and it backfires as he accidentally kills him. The film harkens back to the Coen Brothers' love for film noir dating back to their 1984 debut film Blood Simple while setting it on post-war 1940s in Northern California. Starring Billy Bob Thornton, Frances McDormand, James Gandolfini, Jon Polito, Michael Badalucco, Richard Jenkins, Scarlett Johansson, and Tony Shalhoub. The Man Who Wasn't There is a gorgeous yet eerie film from the Coen Brothers.

Ed Crane (Billy Bob Thornton) is a quiet barber who works at a barbershop owned and managed by his talkative brother-in-law Frank (Michael Badalucco) as Ed is married to Frank's sister Doris (Frances McDormand) who works at a department store run by a big-shot named Big Dave (James Gandolfini). During a dinner with Doris, Big Dave, and Dave's wife/store heiress Ann Nirdlinger (Katherine Borowitz), Ed suspects that Doris is having an affair with Dave as he prefers to keep it to himself. When a traveling businessman from Sacramento named Creighton Tolliver (Jon Polito) arrives into town about a business proposal involving dry cleaning, Ed becomes interested and wants to be involved as a silent partner. To get the money, Ed decides to blackmail Dave at a store party only to deal with a tense Dave who is having other issues.

Despite pondering over what he's doing, Ed gets the money in secrecy as he gives it to Tolliver hoping things would go well. After returning home from a wedding reception for Doris' cousin as Doris got drunk, Ed gets a call from Dave who asks him to come to the store. Dave reveals what he found out as a fight led to bad consequences as Ed returns home thinking nothing happened until the next day when Doris was arrested for Dave's murder. With Ed and Frank searching for a lawyer, Ed turns to his neighbor Walter Abundas (Richard Jenkins) whose teenage daughter Birdy (Scarlett Johansson) has wowed Ed with her classical piano playing. After Walter suggests in getting hot-shot lawyer Freddy Riedenschneider (Tony Shalhoub) to defend Doris despite his hefty price tag. Ed's guilt starts to consume him as he confesses to Doris and Riedenschneider about what happened only for Riedenschneider to dismiss Ed's claim.

Following a strange visit from Ann Nirdlinger who claims that UFOs has taken Dave, Ed tries to deal with all that's happened as he finds comfort in Birdy's piano playing. On the day of Doris' trial, something happens leaving Ed ruined as he discovers some startling secrets from a private detective (Jack MeGee). Wanting to find redemption, Ed decides to invest in Birdy's future as a pianist as he gets her to audition for a music expert named Carcanogues (Adam Alexi-Malle) where its aftermath brings Ed some surprising revelations over everything that he's been through.

What makes The Man Who Wasn't There such a different film from previous efforts was the restraint the film took. While there's bits of humor involving UFOs and a strange fantasy sequence near the end of the film. It adds to some of the offbeat quirks needed to provide the character of Ed Crane a sense of surrealism that he's dealing with in the aftermath of what he's done. The directing of the film is as evocative than any other films with imaginative, subtle images that really gives the film a 1940s look. Even with shots where everything is stilted and all of these symbols come into a room. The Coen Brothers' writing is as potent as ever with not just clever, witty dialogue but extremely moving moments while their narrative flows in a smooth, comforting way. The overall work is an entrancing yet meditative piece from the Coen Brothers.

Complementing the directing style in the cinematography department is longtime regular Roger Deakins. Deakins' masterfully, lush black-and-white photography gives the film a noir-like feel that hadn't been felt since the Coens' 1985 debut Blood Simple. With help from production designer Dennis Gassner and costume designer Mary Zophres, the film captures the look of late 1940s with the right detail and tone that helps Deakins' photography shine.

The editing of Roderick Jaynes (the alias of the Coen Bros.) is wonderfully paced in its slow but mesmerizing style that helps to convey the genre. With the piano sonnets of Beethoven played throughout the film, longtime Coen Brothers composer Carter Burwell brings a dark, eerie score with his lush orchestral arrangements to capture the noir, restrained tone of the movie.

Then there's the film rich cast with wonderful cameos from Christopher McDonald and The Hudsucker Proxy star Jennifer Jason Leigh, in an un-credited cameo that plays up to the film's quirks. Smaller performances from Adam Alexi-Malle as Carcanogues and Richard Jenkins as Walter Abundas are wonderfully performed while Katherine Borowitz give a haunting performance as Big Dave's wife Ann. Scarlett Johansson delivers an amazing yet entrancing performance as Birdy Abundas. Johansson brings a complexity to her role as the innocent, bright Birdy who has purity to Ed Crane but also has a haunting presence with her piano playing that has a dark element to the film. Coens regular Michael Badalucco brings a comical performance as Frank, who seems to know everything but is really a childlike character. Tony Shalhoub is the film's best supporting performance as the fast-talking Freddy Riedenschneider with his over-the-top persona and egomaniacal tone.

Coen regular Jon Polito also brings a comical presence to the film as Creighton Tolliver while James Gandolfini brings a wonderful performance as Big Dave with his big-man persona and complex emotions when he's threatened before going to his mean, Tony Soprano mode. Longtime Coens regular (and Joel's wife) Frances McDormand delivers another masterful performance as Ed's wife Doris. McDormand brings a role as the cheating wife who is in an unhappy lifestyle but when she realizes what Ed has done for, McDormand makes her character be filled with regret and sadness as she also combines comedic elements early on. Billy Bob Thornton is the film's greatest performance as the chain-smoking Ed Crane with his restrained, quiet performance of a man who is trying to find a way out of his dismal life. Thornton gives an understated tone while having wonderful scenes with all the actors, notably Gandolfini, McDormand, Johansson, and Shalhoub. This is by far one of Thornton's best performances.

The film’s regional 1 DVD comes in two formats with many preferring the wide screen format. With 5.1 Digital Surround Sound for English and French plus French and Spanish subtitles, the film has loads of features. With a theatrical trailer and two TV spots, the film also includes a lovely photo gallery and a filmography of several of the film's cast and crew.

The making of feature includes interviews with Thornton, McDormand, Gandolfini, Badalucco, and Shalhoub along with the Coen Brothers and cinematographer Roger Deakins, who all give insight on what the film is about along with a few outtakes. The five deleted scenes don't add a lot to the film except three styles of haircuts and Doris' idea of a salad along with an alternate first argument scene of the courtroom with Tony Shalhoub in top form.

The film also includes two great features for fans of the Coen Brothers. One is a near-hour interview with cinematographer Roger Deakins, who had worked with Coens since 1991's Barton Fink. Deakins gives insight on the art of cinematography along with his influences and how The Man Who Wasn't There came together. While it's long, the interview is a must-see for fans and aspiring filmmakers, notably cinematographers.

The other big feature is a feature-length audio commentary from the Coen Brothers and Billy Bob Thornton, which is by far one of the funniest commentaries heard on DVD. The trio talk a lot of things in the movies including references of a story Gandolfini are telling which is true based on the life of former Coen Brothers cinematographer Barry Sonnenfeld's father. Plus, Thornton makes fun of his Sling Blade persona where he goes "Ed Crane does..." "Ed Crane kills Big Dave and talks to wife again"; "Ed Crane has a boner". Thornton also gives praises to a lot of the crew and cast, notably Scarlett Johansson who he calls "a tough kid" and the Coens admit, they find her intimidating, especially in a scene where she was supposed to eat sunflower seeds and Joel says, she looked at him as if he did something idiotic where Thornton calls her one of the best actresses around.

While the Region 1 DVD has some great moments, there is something that the Coen Brothers fans must have which is the Region 2 DVD. The Region 2 DVD has a colored-version of the movie that looks like a somewhat-bad colorization of black-and-white films but the Coens gave it some lush coloring to make it look plausible.

The Man Who Wasn't There is a ravishing yet dark film from Joel & Ethan Coen led by a chilling performance from Billy Bob Thornton. Featuring amazing technical work and an outstanding ensemble cast that includes Frances McDormand, James Gandolfini, Scarlett Johansson, Richard Jenkins, Michael Badalucco, Jon Polito, and Tony Shalhoub. It's a film that isn't conventional due to its unique approach to film noir while it is a film that does manage to make more sense through repeated viewings. In the end, The Man Who Wasn't There is a mesmerizing film from the Coen Brothers.

Good review. It was Thornton and Johannson that really stood out for me in this film. Yes, the UFO sequence was a little too bizarre, especially compared to the rest of the film's tone, but overall it was still a very good movie. This film, combined with Ghost World, made 2001 the year that I became aware of who Scarlett Johansson was.

Thank you. I was baffled by the UFO stuff as well but later on. I kind of got used to it.

2001 was a great year for Scarlett Johansson, this film along with Ghost World and An American Rhapsody showed everyone this was going to be someone to watch out for. And 2 years later, she gave 2 back-to-back performances that knocked everyone off their asses.

What happened to that actress?

"And 2 years later, she gave 2 back-to-back performances that knocked everyone off their asses."

I agree. She ended up getting two Golden Globe noms for the two different roles, although zip for Oscar noms. I actually feel Girl with a Pearl Earring is her best performance to date.

@Chip-While I always say Lost in Translation is the best film she's ever been in.

Girl with a Pearl Earring is indeed her best performance.

BTW, did you know they considered Kate Hudson for that part?

Yikes. That didn't work as Samantha Morton and Kirsten Dunst were also considered. Morton was too old for that part while Dunst would've been interesting but she hadn't tackled heavy material at that time.

No, I didn't know about those other casting possibilities. Thanks for the info. (I think they made the right choice eventually).

Besides, name one performance from Kate Hudson that is worth mentioning that isn't Almost Famous?