007 James Bond Marathon: For Your Eyes Only 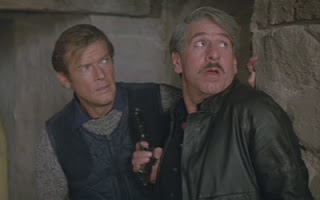 Based on Ian Fleming’s novel, For Your Eyes Only is the story of James Bond trying to recover a missile command object from a Greek businessman who is also targeted by a woman seeking revenge for her parents’ death. Directed by John Glen and screenplay by Richard Maimbaum and Michael G. Wilson, the film returns to more traditional elements of Bond following a series of genre-bending films as the humor is also more restrained as Roger Moore returns for his fifth of seventh outing as James Bond. Also starring Carole Bouquet, Chaim Topol, Julian Glover, Lynn-Holly Johnson, Desmond Llewelyn, Lois Maxwell, Walter Gotell, and Geoffrey Keen. For Your Eyes Only is a suspenseful yet tremendous film from John Glen.

After the disappearance of a secret spy boat and the assassination of a marine archeologist (Jack Hedley) and his wife, James Bond is asked by the Minister of Defense (Geoffrey Keen) to investigate the matter as Bond travels to Spain to confront the suspected assassin Hector Gonzalez (Stefan Kalipha) and find out who hired him to killed Sir Timothy Havelock. While Bond eventually finds the man who paid Gonzalez, Gonzalez was suddenly assassinated as Bond learns that Havelock’s daughter Melina (Carole Bouquet) who is seeking vengeance for her parents’ murder as she wants to go after the man who hired Gonzalez. With the help of Q (Desmond Llewelyn) and his identi-graph machine, Bond learns that a man named Emile Leopold Locque (Michael Gothard) is the man who paid Gonzalez as Bond travels to Cortino, Italy for more information on Locque.

Bond meets Greek businessman Aristotle Kristatos (Julian Glover) who claims that Locque is a hired killer working for his business rival in Milos Columbo (Chaim Topol) as Bond also meets Bibi Dahl (Lynn-Holly Johnson), an ice-skating prodigy Kristatos is sponsoring. After dealing with some of Locque’s henchman including an assassin named Erich Kriegler (John Wyman), Bond later goes to Greece to meet up with Kristatos and see the scenery with Melina who is still trying to find Locque. After seducing Columbo’s mistress in Countess Lisl von Schlaf (Cassandra Harris), Bond later has an encounter with Locque that goes wrong where Bond finally meets Columbo who reveals some information about who Kristatos really is forcing Bond to realize something isn’t right.

After meeting Melina to recover the ATAC decoding machine from the boat, the two finally realize who wants the machine all along and who really hired Gonzalez and Locque to kill the Havelocks. There, Bond realizes what he must do to stop the sale of the ATAC to the KGB as he and Melina would get some help for the mission.

The film is essentially the story of Bond trying to recover a decoding machine that he hopes won’t get into the wrong hands while being entangled into a web of intrigue and lies as he tries to find out who killed a marine archeologist whose daughter is also seeking vengeance for her parents’ death. It’s a story that is simple but filled with lots of suspense and action as well as bits of humor. Notably as Bond has to figure out who wants this device and for what while wondering if he’s being played by these two rivaling smugglers who despise each other and see who is really telling the truth.

Helping Bond in this mission is Melina Havelock, a Bond girl that may have her own agenda but she aids Bond in trying to find out why her father was killed. While her motive may be for vengeance for her parents’ murder, it’s only because she feels she has to do what is necessary to gain justice for what happened as she cites Greek folklore as inspiration. While she may not a completely physical force, she is deadly with a crossbow as well as very determined that makes her one of the most compelling figures in a Bond movie. Especially since she and James Bond do help each other and eventually team up in the film’s second half where they prove to be a strong team.

The screenplay by Richard Maimbaum and Michael G. Wilson is successful for not just creating great characters like Melina, Kristatos, and Columbo but for also raising the stakes of what Bond had to do. There is a MacGuffin in the form of this ATAC decoding device where if it was in the wrong hands, someone could control the enemy submarines to shoot nuclear missiles against the enemy. For Bond, it’s something he has to do as he eventually has to realize that the KGB is involved and its ending has him doing something for the sake of world peace.

In his first outing as director, John Glen succeeds in creating a Bond film that harkens back to its roots. More element of suspense and extended action sequences, it’s a film that manages to be engaging and thrilling through the compositions he creates as well as the locations that he manages to have Bond be in. Yet, the film opens in grand style with a prologue that has Bond at a graveyard and then being trapped in a helicopter that is remote controlled by an old enemy. It’s a prologue that doesn’t have anything to do with the main story but it’s a great opening sequence to emphasize Bond going back to his roots while being witty in the way he defeats this old adversary.

The rest of the film maintains its sense of intrigue where Glen allows the audience to follow Bond in his attempt to uncover the mystery through this web of lies where he wonders who is telling the truth in these two rivaling smugglers. Bond is able to charm his way into getting information while having to fend off foes through any means such as this huge chase sequence where he’s having to ski in a sequence that is quite long but investing in how Bond has to evade these assassins. The climatic battle where Bond has to recover the ATAC before the KGB gets it is also filled with suspense where Bond has to mountain climb this secret base as there’s moments where Bond might not be able to succeed. Overall, Glen creates a film that has all of the tropes of what a Bond film is and should be while playing to its strengths by balancing the film with lots of action and suspense.

Cinematographer Alan Hume does excellent work with the photography from the soft lenses he uses for some of the nighttime close-ups to the colorful exteriors of the locations from the white snow of Cortino, Italy to the beautiful scenery in Greece. Editor John Grover does superb work with the editing by creating dazzling cuts to play up the film‘s action scenes as well as more methodical pacing for some of the film‘s suspenseful moments. Production designer Peter Lamont, along with set decorator Vernon Dixon and art director John Fenner, does amazing work with the set pieces such as the climatic base near the film‘s end as well as the design of the Neptune submarine that Bond and Melina use to find the ship. Costume designer Elizabeth Waller does terrific work with the costumes from the underwater suits Bond and Melina wear to find the ATAC to some of the clothes that Melina wears socially.

Visual effects supervisor Derek Meddings does brilliant work with the minimal visual effects scenes created such as some of the underwater scenes and the action sequences in Cortino. Sound mixer Derek Ball does nice work with the sound to capture the layer of gunshots to the crackling of pistachio nuts that Columbo always eats and uses during missions. The film’s score by Bill Conti is stellar for its electronic-driven score that plays to mixture of rhythmic-based themes for some of the film’s action sequences to more lush themes for some of the film’s romantic scenes. The title song by Conti and lyricist Michael Leeson is among one of the best theme songs as it is sung by Sheena Easton who appears in the film’s stylish opening credits sequence.

The casting by Debbie McWilliams and Maude Spector is incredible for the ensemble that is created as it features some small performances from Charles Dance as a henchman of Locque, John Moreno as Bond‘s Italian contact Luigi, Jack Hedley as Melina‘s father Sir Timothy Havelock, James Villers as MI6 Chief of Staff Bill Tanner, Stefan Kalipha as the assassin Hector Gonzalez, Jill Bennett as Bibi‘s coach Brink, Cassandra Harris as Columbo‘s mistress Countess Lisl von Schlaf, and John Hollis as Bond‘s old adversary in the film‘s opening prologue. Bond regulars like Lois Maxwell as Miss Moneypenny, Walter Gotell as KGB head General Gogol, and Desmond Llewelyn as Q are always a joy to watch where Q gets to have a funny scene where he briefs Bond in Greece. Geoffrey Keen is excellent as the Minister of Defense who briefs Bond in what he has to do as Keen does a nice job in taking the place of the M character.

John Wyman is very good as the henchman Erich Kriegler who is proven to be a formidable opponent for Bond while Michael Gothard is also good as the mysterious killer Emile Leopold Locque. Lynn-Holly Johnson is terrible as Bibi Dahl where it’s a character who tries to seduce Bond as Johnson’s dramatic moments aren’t very good as she is one of the worst Bond girls out there. Chaim Topol is excellent as Kristatos’ former smuggling partner Columbo who makes some startling revelations to Bond about Kristatos as Topol gives a very low-key performance as a man who has a love for pistachio nuts. Julian Glover is great as the shady Kristatos who tries to manipulate Bond into going after Columbo while trying to maintain his role as a fair but corrupt businessman.

Carole Bouquet is brilliant as Melina Havelock, a woman seeking vengeance for her parents’ death as she aids Bond in trying to retrieve the ATAC decoding device. It’s a performance that ranks up there with some of the best Bond girls as Bouquet also has a beauty that is truly intoxicating to look at while proving to be very strong in some of the film’s dramatic moments. Finally, there’s Roger Moore as James Bond where Moore gives another phenomenal performance as he displays a more restrained humor to Bond while making Bond more cunning in the way he tries to uncover plots and such.

For Your Eyes Only is a marvelous James Bond film from John Glen that features a top-notch performance from Roger Moore as Bond along with notable supporting work from Carole Bouquet, Chaim Topol, and Julian Glover. The film is among one of the best films of the Roger Moore era as it goes back to its roots by being more of a suspense film rather than trying to mesh with another genre. In the end, For Your Eyes Only is a brilliant film from John Glen.

James Bond Files: The EON Films: Dr. No - From Russia with Love - Goldfinger - Thunderball - You Only Live Twice - On Her Majesty's Secret Service - Diamonds are Forever - Live and Let Die - The Man with the Golden Gun - The Spy Who Loved Me - Moonraker - Octopussy - A View to a Kill - The Living Daylights - Licence to Kill - GoldenEye - Tomorrow Never Dies - The World is Not Enough - Die Another Day - Casino Royale (2006 film) - Quantum of Solace - Skyfall - SPECTRE - No Time to Die

Isn't this the one where Bond ends up going down a bobsled run on skis, just behind a bobsled, and just ahead of a motorcycle with spiked tires? If so, that was a pretty unique chase sequence.

Yep, it's in that film. That is a great sequence. Only a Bond film can do that so well.