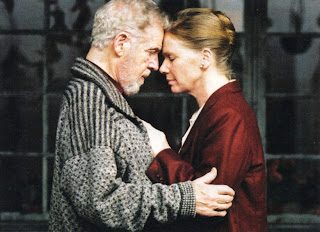 Written and directed by Ingmar Bergman, Saraband is a sequel to 1973’s Scenes from a Marriage in which Marianne visits her ex-husband Johan to deal with family drama in their summer home. The TV film would be Ingmar Bergman’s final film of his career before his death in 2007 as he revisits two of his characters from Scenes from a Marriage as Liv Ullmann and Erland Josephson reprise their roles. Also starring Borje Ahlstedt, Julia Dufvenius, and Gunnel Fred. Saraband is an exquisite yet chilling drama from Ingmar Bergman.

After having not seen Johann for thirty years, Marianne decides to make a visit at his cottage home in the woods where the two discuss their daughters as one of them in Martha (Gunnel Fred) remains ill as she’s living at a nursing home. Marianne admits she isn’t sure about why she’s visiting Johann as she deals with family drama as she meets Johann’s granddaughter Karin (Julia Dufvenius) who is upset over her father Henrik (Borje Ahlstedt) who remains anguished over the death of his wife two years ago. As Karin bonds with Marianne and discusses her upcoming audition for a prestigious European conservatory as Henrik later asks his father for a loan to buy a new cello for Karin.

Johann would later give Karin a tempting offer that she’s unsure about while Marianne notices Henrik’s behavior whenever his wife is mentioned as she becomes concerned for Karin who reveals her decision to Marianne. A decision that would later cause family drama as Marianne wonders about Johann’s reaction to its aftermath.

The film is about Johann and Marianne coming together again for a brief moment as Marianne finds herself in the middle of family drama when Johann’s son is still in grief over his wife’s death two years ago. Meanwhile his granddaughter becomes confused over taking a prestigious conservatory as a cellist while wondering what will happen to her father who is already losing his grip on life. It’s a film that explores a family on the brink of chaos as a man’s ex-wife carefully tries to observe all that is happening as she watches a young woman she never knew and a former stepson she barely know be in anguish while her ex-husband tries to smooth things out despite the issues he has towards his estranged son.

The screenplay is told in 10 chapters with a prologue and epilogue told that is told from Marianne’s perspective as her character breaks the fourth wall to explain everything she is doing and its aftermath while the only time she breaks the fourth wall in the rest of the story is in the first chapter as she wonders why she’s visiting a man she hadn’t seen in more than 30 years. The rest of the story is about this family drama with Marianne observing everything that she sees while Johann tries to stay away from it though his advice for both Henrik and Karin would each have some consequences.

Ingmar Bergman’s direction is very engaging in the way he opens and closes the film as well as shooting everything with striking compositions. Notably as characters are at the edge of the frame on a wide shot or in intimate close-ups to express their emotions. It’s compositions that are typical of Bergman’s work yet they remain so potent in the way he shoots an image such as Karin running through the woods in a tracking shot. The direction is always saying something as it also plays up to the drama that unfolds as Bergman makes sure that something will happen leading to revelations that are unexpected. Overall, Bergman crafts a compelling yet intoxicating drama that explores the dynamic of a dysfunctional family as well as the enduring chemistry between an old couple.

Cinematographers Stefan Eriksson, Jesper Holmstrom, Per-Olof Lantto, Sofi Stridh, and Raymond Wemmenlov do nice work with the film‘s photography from the lush look of the Swedish forest exteriors to the colorful look of the interiors that recalls the work of Bergman‘s old collaborator Sven Nykvist. Editor Sylvia Ingemarsson does excellent work with the editing in utilizing mostly straightforward cuts to play out the drama. Production designer Goran Wassberg does terrific work with the look of the cottages Johann and Henrik live in to express their personalities.

Costume designer Inger Pehrsson does very good work with the costumes as it's mostly casual for many of the actors that appear in the film. The sound work of Anders Degerberg, Carl Edstrom, Borje Johansson, Per Nystrom, and Ulf Olausson is superb for the way objects and doors sound as well as some of the music that is performed on location. The soundtrack consists of largely classical music from Johann Sebastian Bach, Johannes Brahms, Anton Bruckner, and Robert Schuman to exemplify the world the characters live in.

The film’s cast is brilliant for the small ensemble that is created as it features a small appearance from Gunnel Fred as Johann and Marianne’s ailing daughter Martha in a flashback scene while Julia Dufvenius is great as the conflicted Karin who tries to cope with her father’s behavior as well as an upcoming conservatory audition. Borje Ahlstedt is excellent as Johann’s estranged son who is trying to deal with his wife’s death as well as the hostility he has towards his father.

Finally, there’s Liv Ullmann and Erland Josephson as both give incredible performances in their respective roles of Marianne and Johann. Ullmann brings a gracefulness to her role as a woman observing all around her while pondering about everything she had been through with Johann in the past. Josephson brings a reserved performance as a man trying to deal with all of the family drama as well as the fact that he is an admitted failure. Both Ullmann and Josephson display an amazing chemistry that is still potent to watch proving that they still got it.

Saraband is an extraordinary film from Ingmar Bergman that features top-notch performances from Liv Ullmann and Erland Josephson. While the film might be considered minor Bergman, it is still a cut above most dramas about lost love and family dysfunction as it’s a worthy sequel to Scenes from a Marriage. For a film that serves as Bergman’s finale, there is no better way for him to go out as he does it with class and grace. In the end, Saraband is a marvelous film from Ingmar Bergman.

So weird, I just rewatched this last night, and now I get to read your excellent review. So very fitting.

I love Saraband, and your notion that while this may be minor Bergman, it’s still superior to many of the other films dealing with similar themes, is something I couldn’t agree more with.

It wasn't easy to watch (part of it was due to the fact that I was on Risperidone, which I don't recommend) but I certainly liked it enough. It's a minor Bergman film but still, he chose to go out in a fitting manner.