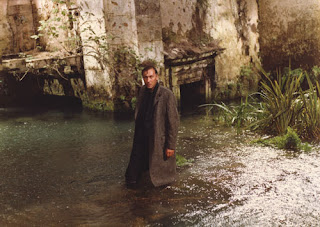 Directed by Andrei Tarkovsky and written by Tarkovsky and Tonino Guerra, Nostalghia is the story of Russian poet Gorchakov’s travel to Italy with a translator to research the life of an 18th Century composer. The film is an exploration into the world of nostalgia as a man finds himself in a strange world. Starring Oleg Yankovsky, Domiziana Giordano, and Erland Josephson. Nostalghia is a spellbinding yet abstract film from Andrei Tarkovsky.

The film is essentially the story of a Russian poet named Andrei Gorchakov (Oleg Yankovsky) who travels to Italy to do research on the life of an 18th Century composer as he finds himself longing to return home to Russia as he deals with homesickness and frustration. Traveling with a translator named Eugenia (Domiziana Girodando), who is smitten by him, as their relationship starts to fall apart during the journey where they encounter a church proceeding and later stop in a small town. At this small town where Gorchakov is doing his research, he meets a strange madman named Domineco (Erland Josephson) who feels alienated by his surroundings as he and Gorchakov bond. This would prompt Gorchakov to embark on a series of strange dreams about his home where he would want to go home.

The screenplay by Andrei Tarkovsky and Tonino Guerra is an exploration into the world of loneliness and seeking answers in a very foreign world as it’s told largely from the perspective of Gorchakov. Here’s this man that is intent on trying to finish research on this 18th Century composer where he doesn’t find the answers he’s looking for as he’s forced to look at himself. Even as he has to deal with all sorts of things that includes abstract dreams and images that recalls home where he would even do something the madman had been wanting to do. The screenplay doesn’t have much of a structure as it’s mostly driven by dialogue and action in order to tell the story of this man lost in his surroundings.

Tarkovsky’s direction bears a lot of his unique visual style that is filled with long shots, entrancing wide compositions where there’s slow close-ups, and gorgeous scenery involving elegant moments of nature. Yet, the film is also very intimate in the Tarkovsky presents the film as his camera is always fixated on his three central characters and their surroundings. A lot of the film takes place in Italy, with some scene shot in Russia, where Tarkovsky explores a world that is very different from Russia as the story involves a Russian being in Italy where the land is a lot stranger than he realizes.

The direction would also include these strange flashbacks that is shot in a monochrome photography style to establish the sense of longing for Gorchakov. Notably as Tarkovsky would have the actors be placed in a shot and then have them again in another position just as the camera is still moving. The scenes such as the madman’s speech in the town and Gorchakov carrying a candle to cross an empty pond show a sense of suspense of what could possibly happen as the results would feature some chilling moments. Overall, Tarkovsky crafts a very engaging yet provocative drama that explores the world of nostalgia and longing.

Cinematographer Giuseppe Lanci does fantastic work with the film‘s photography from the colorful yet entrancing look of the many scenes set in Italy from its landscapes and cities to the brown monochrome photography to play up the flashback scenes. Editors Erminia Marani and Amedeo Salfa do nice work with the editing by creating a mostly straightforward approach to the cutting with very few cuts while utilizing more stylistic flair in the abstract dream sequence. Production designer Andrea Cristani and set decorator Mauro Passi do wonderful work with the set pieces such as the hotel rooms that Gorchakov and Eugenia stay in to the decayed home that Domenico lives in.

Costume designer Lina Nerli Taviani does terrific work with the costumes where a lot of is casual with the exception of the dresses that Eugenia wear. The sound work of Remo Ugolinelli is brilliant for the layer of sounds that is created in many of the film’s intimate moments such as the church scene and the small pond inside a ruined home. The film’s soundtrack largely consists of the music of Ludwig Van Beethoven along with pieces by Richard Wagner, Claude Debussy, Giuseppe Verdi, and some Russian folk music as a lot of it is played on location to create a mood for certain scenes.

The film’s small but excellent ensemble cast includes a small performance from Patrizia Terreno as Gorchakov’s wife while Domiziana Giordano is superb as Gorchakov’s translator Eugenia who is frustrated by Gorchakov’s lack of feelings toward her. Erland Josephson is incredible as the deranged Domenico who would guide Gorchakov into some ideas that would impact the protagonist. Finally, there’s Oleg Yankovsky in an amazing performance as Gorchakov as he displays a great sense of restraint as a man lost in his surroundings and his work as he longs to return home.

Nostalghia is a remarkable yet entrancing film from Andrei Tarkovsky that features top-notch performances from Oleg Yankovsky and Erland Josephson. While the film, like many of Tarkovsky’s films, isn’t easy to watch due to its slow, methodical pace and its concept on art, faith, and nostalgia. It is still an intriguing film for the way it explores the world of man lost in a different world. In the end, Nostalghia is a stellar yet captivating film from Andrei Tarkovsky.

I've never heard of this movie, and it sounds like a gem. I'm adding it to my list. Your review is terrific -- I especially like your gorgeous description of the cinematography.

Thank you. It's worth checking out if you're interested in the works of Andrei Tarkovsky as it's a really captivating film about longing.