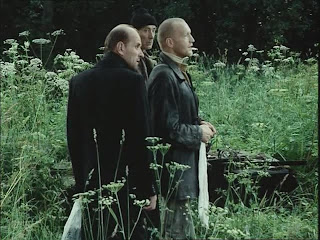 Based on the novel Roadside Picnic, Stalker is the story of an expedition led by a man who brings two clients to a world that was to fulfill their desires. Directed by Andrei Tarkovsky and written by Arkadi and Boris Strugatsky, the film is a sci-fi piece that explores a journey into the unknown as it refers to Tarkovsky’s fascination with faith and mysticism. Starring Aleksandr Kaidanovsky, Anatoli Solonitsyn, and Nikolai Grinko. Stalker is a provocative yet entrancing film from Andrei Tarkovsky.

In a futuristic world where people live in a desolate homeland where they’re guarded to not enter a secret place known as the Zone. The one person who claims to have been to the Zone is a man known as the Stalker (Aleksandr Kaidanovsky) as he wishes to return to the Zone much to the protest of his wife (Alisa Freindlich). Joining him for this journey into the Zone are two men seeking fulfillment in the journey. One is the Writer (Anatoli Solonitsyn) and the other is the Professor (Nikolai Grinko) as they listen to the Stalker’s instructions where they break past the Zone gate and ride on a railway car to this mysterious yet exotic land.

At the Zone, the three men encounter mysterious things at the land as the Writer becomes annoyed by the Stalker’s instructions. While the Stalker claims that the land is unpredictable, the Writer and Professor are entranced by this strange world as they see a beautiful world of nature mixed in abandoned tanks and places. After coming across some strange places including a dark tunnel and sand dunes, the place turns out to be much more troublesome than the men realize. Even as the Stalker is forced to come to terms with what these men want from the Zone.

The film is essentially a futuristic tale about a man who brings two different men into a plot of land as they hope to fulfill their personal desires that they couldn’t get in their homeland. It’s a very simple premise yet the land that they enter is full of complexities where it’s all driven by this man who has been to this mysterious land as only he knows its rules and such. All this man wants to do his make sure his clients get what they want but the men he brings in to this mysterious land are men with good intention. The problem is that what they want is really far more complicated as it would only cause problems for their guide who treasures this mysterious land.

The screenplay that Akardi and Boris Strugatsky create has a unique structure where the first act takes place in this dreary land where everything is in ruins and such. The second act takes place in the Zone where it’s about these three different men such as the cynical Writer, the reasonable Professor, and the complicated but well-meaning Stalker as they trek into this land. It’s in the second act in the Zone where the story follow these men around as they figure out what to do in this land as there’s a possibility where they might not come back. Even as they go into this decayed building where things get more complicated as the film progresses where true intentions are unveiled along with disillusionment. This would lead to some very telling moments about the way the world works and the flaws of humanity.

Andrei Tarkovsky’s direction is truly mesmerizing in the way he presents the film from start to finish. With many of the scenes in the decayed homeland in the film’s first act is shot in a monochrome sepia style to establish a world that is lost and on the brink of collapse. The scenes in the Zone is shot with gorgeous colors as a lot of it is shot in these gorgeous locations in the forest where there’s a feeling of Eden being present in this world. Like nature, it’s unpredictable where there’s a sense of dread about this land and what is there that leads to these more entrancing scenes inside this strange building.

The direction is filled with a lot of long shots that slowly builds up to key moments of the film as Tarkovsky takes his time to let the scene play out. Even as Tarkovsky slowly zooms the camera to create close-ups or wide shots of the characters that he’s shooting on film. The direction is always ensuring about a world where nothing is as it seems in the Zone where there’s moments that feels out of the world such as the sand dunes in a room. The film’s final moments is very sobering where it’s about this troubling aftermath where the camera is always wandering about the location and such and what is happening. Overall, Tarkovsky creates a truly hypnotic film that explores the world of men and their desires.

Cinematographer Aleksandr Knyazhinsky does brilliant work with the film‘s colorful cinematography for the scenes in the Zone to play out a world that is exotic while using the brown monochrome look to emphasize the world of despair. Editor Lyudmila Feiginova does excellent work with the editing by creating some rhythmic cuts for the film‘s gate-breaking scene while a lot of the cutting is straightforward to play out the film‘s slow yet methodical pace. Set decorator Rashit Safiullin and art director Shavkat Abdusalamov do fantastic work with the look of the world that the characters live in to strange world of the building in the Zone.

Costume designer Yelena Fomina does good work with the costumes as a lot of it is mostly casual to play out the characters‘ personality. The sound work of Vladimir Sharun is amazing for the atmosphere that plays out from the sounds of trains in the homeland to intoxicating mix of sounds in the Zone as Sharun‘s work is a major highlight. The film’s score by Eduard Artemyev is superb for its eerie yet seductive electronic score that is filled with a lot of low-key pieces to play out the sense of dread and melancholia as it’s another of the film’s technical highlights.

The film’s small ensemble cast is terrific as it features a small but memorable performance from Natasha Abramova as the Stalker’s daughter as well as a superb performance from Alisa Freindlich as the Stalker’s wife who delivers a great monologue in the film’s final moments. Nikolai Grinko is wonderful as the intelligent Professor who kind of serves as the film’s conscience only to reveal his true intentions about entering the Zone. Anatoly Solonitsyn is great as the cynical writer who feels annoyed by the Stalker as he comments about everything he sees in hopes to find inspiration in the Zone. Finally, there’s Aleksandr Kaidanovsky in an incredible performance as the Stalker as a man who hopes to do everything for these two men in the Zone while dealing with the fact that he’s bringing into a very complicated world that would make him realize the flaws of humanity.

The 2006 2-disc Region 1 DVD from Kino presents the film in its original 1:33:1 full-frame theatrical aspect ratio with 5.1 Surround Sound and Mono in Russian along with English and French subtitles/voiceovers. The first disc features the film in its entirety while the second disc features an array of extra features relating to the film and its director Andrei Tarkovsky. The first special feature are three different interviews with Tarkovsky’s collaborators. Eduard Artemyev’s 20-minute interview has the composer discussing his relationship with Tarkovsky including their working methods where Artemyev reveals a lot of what Tarkovsky wanted in the music as there was something more intimate that was used for Stalker.

The six-minute interview with cinematographer Aleksandr Knyazhinsky has him talking about the production and the difficulty of shooting as he looks at pictures reveling in the fact that many people in the film had already died. The 14-minute interview with production designer Rashit Safiullin has Safiullin discussing about the film’s troubled production as well as Tarkovsky whom he recalls about his unique approach to directing. Even as he reveals tidbits about some of the film’s set pieces and his own thoughts on the film.

Two other special features includes an excerpt of Tarkovsky’s 1961 short film The Steamroller and the Violin as well as a five minute short by Serghei Minenok called Memory. The latter of which features footage from Stalker inter-cut with images of Tarkovsky’s childhood home. The DVD also includes a brief biography on Tarkovsky as well as filmographies of the director, cast, and crew members. The DVD also features a photo gallery that features rare footage of the film in production.

Stalker is an intriguing yet intoxicating film from Andrei Tarkovsky. Featuring superb performances from Aleksandr Kaidanovsky, Anatoli Solonitsyn, and Nikolai Grinko. It is truly one of the most compelling sci-fi films of the 20th Century for the way it explores humanity and the mystery of desires. While it isn’t an easy film to watch, it is still engaging for the way it presents strong themes that is matched by entrancing images. In the end, Stalker is a phenomenal film from Andrei Tarkovsky.

When I saw this I ultimately decided that it was actually more an allegory than a science fiction movie. The only element that actually might make it science fiction is the very last scene where a bit of telekinesis may be shown. The rest is the dependence of the men's beliefs of what that place in the Zone will bring to them. This could just as easily be represented by some men trying to make it to a religious shrine that is in war territory.

It's definitely an interesting film, though.

It was a better film than I had expected it to be. Still haunts me on the images that is presented.

My Auteurs piece on Tarkovsky will come out tomorrow and he's now one of my favorite filmmakers.