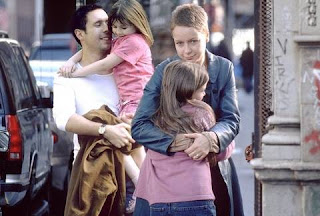 Directed by Jim Sheridan and written by Jim, Kristen, and Naomi Sheridan, In America is the story of an Irish family moving to New York City’s Hell’s Kitchen area to start a new life following the loss of their young son. There, they encounter the hardships of a new land while befriending an AIDS-stricken neighbor. The film is an exploration into the world of immigration told in the eyes of a young girl. Starring Paddy Considine, Samantha Morton, Djimon Hounsou, and introducing Sarah and Emma Bolger. In America is a heartwarming film from Jim Sheridan.

Following the death of their son Frankie, Johnny Sullivan (Paddy Considine), his wife Sarah (Samantha Morton), and their two daughters Christy (Sarah Bolger) and Ariel (Emma Bolger) arrive to America to start a new life. Finally arriving in New York City, the Sullivans arrive at Hell’s Kitchen to live in an apartment filled with all sorts of people as Sarah got a job working at an ice cream parlor while Johnny tries to go to auditions to land acting jobs as he eventually becomes a cab driver. Though they struggle to get by, the Sullivans continue to live a decent life as Christy chronicles everything through her camcorder. Especially as things become tense between Johnny and Sarah over Frankie’s death when Sarah learns she is pregnant.

After meeting an AIDS-stricken painter named Mateo (Djimon Hounsou), the family enjoys his company though Johnny struggles to deal with his lack of emotions about everything. Yet, he eventually grows fond of Mateo’s presence as he await the birth of his new baby as he realize there’s a risk about the baby coming early or coming later which could mean some issues for Sarah in the later. When the baby arrives sooner than expected, Christy is willing to take a risk to save the baby as the family awaits for what will happen while pondering about what will happen to the ailing Mateo.

The film is about an Irish family coming to America to start a new life as they deal with near-poverty, cultural differences, and grief following the loss of their son to a brain tumor. There, they meet a painter suffering from AIDS while the family also deal with each other in an apartment in the Hell’s Kitchen area in New York City in the span of a year. It’s a story that is very universal about family trying to live the American dream in a world that is foreign to them. Yet, a lot of it is told from the perspective of a child who is granted three wishes from her late brother which she uses carefully in crucial parts of the story that includes a scene of Johnny trying to win Ariel an E.T. doll.

The screenplay is told in a very loose fashion as Christy chronicles everything not just on her camcorder but her memories as she is trying to see her parents deal with grief while caring for her younger sister as they deal with their new surroundings. Notably in a scene where their mother and a friend from the ice cream parlor made Halloween costumes while all of the kids at the Catholic school were costumes that were bought to express the alienation between the sisters and the other kids. Yet, it’s part of their development as the family would find a friend in Mateo who feels alienated because of his disease yet is warmed by the presence of Christy and Ariel.

Jim Sheridan’s direction is truly magical in the way he shoots the film with a great sense of beauty and realism as some of it shot with a camcorder to present Christy’s perspective of everything she is seeing past and present. Shot on location in New York City where it serves as a character of its own, Sheridan’s fluid direction definitely wanders around the location while he creates key scenes to help move the story forward or to make proper introduction of characters such as the scene where the girls meet Mateo for the first time. While a lot of the presentation is simple, the way Sheridan plays out the drama and some of the more lighter moments of the film is to have the actors be natural as they can be. While some of the moments do revel in sentimentality, it’s earned because of the grief that surrounds the film as well as the fact that it’s a story about a family. Overall, Sheridan creates a truly dazzling and touching film that explores the life of an Irish family in America.

Cinematographer Declan Quinn does a brilliant job with the film‘s photography from the grainy video camera look of the camcorder camera shots to the more pristine look of the NYC locations for its exterior settings as well as some wonderful shots for some of the film‘s interiors. Editor Naomi Geraghty does excellent work with the editing in creating stylish montages to play up some of the drama and light-hearted moments of the film as well as some straightforward cuts to play out the drama. Production designer Mark Geraghty, along with set decorator Johnny Byrne and art director Susie Cullen, does fantastic work with the set such as the look of the Sullivans‘ apartment as well as apartment of Mateo.

Costume designer Eimer Ni Mhaoldomhnaigh does very good work with the costumes as a lot of it is very casual to play up to the seasons of NYC. Sound editor Nigel Mills does superb work with the sound from the scene where the Sullivans arrive to New York City to hear an array of sounds coming from the car radio. The film’s score by Gavin Friday and Maurice Seezer is terrific for its low-key sound filled with xylophones and soft brass instruments to play up the whimsy along with some low-key electronic music for some of its dramatic moments. Music supervisor David Donohue creates a soundtrack that filled with different kinds of music ranging from rock like the Lovin’ Spoonful, the Byrds, and a cover of the Eagles’ Desperado, sung by Sarah Bolger, along with Latin and classical music as well as an original song in Time Enough for Tears co-written by Bono and sung by Andrea Corr of the Corrs that truly expresses the film as a whole.

The casting by Sally Osoba is phenomenal for the ensemble that is created as it features some notable small appearances from Juan Carlos Hernandez as tenant named Papo and Merina Millsapp as Sarah’s ice cream parlor friend Marina. Emma Bolger is wonderful as the young Ariel who tries to understand everything around her as she is the first one to connect with Mateo. Sarah Bolger is amazing as Christy who tries to observe everything around her while giving answers to Ariel about the way the world works. Djimon Hounsou is great as Mateo, a mysterious painter who is first heard screaming as he becomes this angry man who suddenly is greeted with warmth by this family. Samantha Morton is superb as Sarah who tries to come to terms with Johnny’s lack of emotion as well as dealing with her own pregnancy. Paddy Considine is excellent as Johnny who tries to deal with his lack of emotions as well as the grief he’s dealing with as it’s a very lively performance from Considine.

In America is an extraordinary film from Jim Sheridan featuring an outstanding ensemble cast and a touching story that audiences will relate to. It’s a film that is very accessible in the way family are played out in all sorts of dysfunctions as well as a truly compelling film about how immigrants integrate themselves into the new world. For fans of Jim Sheridan, the film is definitely his most accessible feature as he brings a truly personal feel to this story. In the end, In America is a marvelous film from Jim Sheridan.

I love everything about this movie. I’m glad you pointed out Declan Quinn’s work in it, I’ve never felt that it was discussed as much as it should’ve been. I consider this Sheridan’s most personal film (fitting for how closely it mirrors aspects of his life), but that really is saying something. Just a touching work of art.

The camera work was something worth noting and based on what I've seen from Jim Sheridan, this remains my favorite film of his. It's a truly touching film and I hope he can get out of the funk he's been in the last few years.

I liked this film quite a bit. I saw it only because it had appeared on the IMDB Top 250, so I watched it knowing pretty much nothing about it. It was a very pleasant surprise.

I found the daughters to be quite appealing and I'm surprised I've only seen the older one in one other movie (didn't even recognize her for most of the movie - The Spiderwick Chronicles), and the younger one in none.

@Chip-Actually, the younger one did a TV movie of Heidi after this film but I don't think she's acted since. The older one was in The Tudors in its last season.