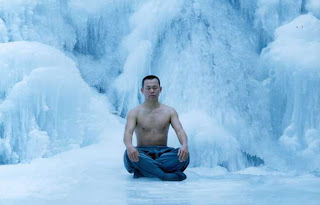 Written and directed by Kim Ki-Duk, Spring, Summer, Fall, Winter… and Spring is the story of the life a Buddhist monk told in five different seasons through different parts of his life. The film is an exploration into a man in five parts of his life from childhood to adulthood set in different moments of his life. Starring Su Oh-yeong, Kim Young-min, Seo Jae-kyung, Kim Jong-ho, and Ha Yeo-jin. Spring, Summer, Fall, Winter… and Spring is an evocative yet hypnotic film from Kim Ki-Duk.

The film is essentially the story about the life of a monk who lives with an older monk (Su Oh-yeong) in the course of five different periods. There, he starts off as a boy (Kim Jong-ho) wondering about his surroundings including animals as the old monk raises him and it ends in full circle where the monk is a full-fledge adult (Kim Ki-Duk). All of it is told in five parts and in four seasons in the evolution of this young monk where he learns about life as a child. In the summer as a young man (Seo Jae-kyung), he learns about temptation when a young woman (Ha Yeo-jin) arrives to live with monks for her illness where he becomes tempted by the world outside of this floating monastery.

There’s an element of serenity and innocence in the film’s first half as there isn’t a lot of dialogue told throughout the first two sections of the film. Still, there’s an element of trouble told in some of the dialogue in how the old monk tells his apprentice about the world outside and how bad things will be if there’s no control. When it comes to the fall section, the man (Kim Young-min) arrives as a man disillusioned and troubled by the world he had just left seeking some sort of redemption and peace. He would be followed by two detectives (Ji Dae-han and Choi Min) as they would be amazed by the world the old man had created but it would also be a turning point for both the old monk and his apprentice as the latter would return in the winter section all alone to fulfill the work of his master.

The film’s unique structure and lack of conventional storytelling as it’s all about a man’s evolution to understand the role he must live in. Yet, he is later torn in the world of love and faith only to discover that the world outside is far more complicated than the sheltered serenity he was raised by. In his subsequent returns to the monastery, he would have to find inner peace through not just means of humility but also understanding where he would eventually have to go onto a path without the master who had raised him.

The direction of Kim Ki-Duk is truly ravishing in the way he presents the film as it all takes place in one singular location in the middle of a lake surrounded by mountains. With the film set in the forest and waterfalls near the lake, Ki-Duk presents a world that is just simple where it’s just man and nature. The first two parts is all about these the old man and his apprentice living in a peaceful monastery until the girl and her mother (Kim Jung-young) come in seeking help from the monk. It is the girl’s presence that would cause temptation among this young apprentice as Ki-Duk has the two just expressing each other physically where it would eventually lead to a romance. Yet, Ki-Duk always ensure that the old monk is there since he has a good idea what is going on. There’s a sense of restraint in not just the acting but the directing where the camera always lingers on this floating monastery and always opens each section with the temple doors opening to present a new season. Even as Ki-Duk serves as editor to give each section different pacing feels so that they can each standout.

With these gorgeous compositions of the location and its surroundings, Ki-Duk creates a world that is filled with the simple ideas of temptation, wonderment, pleasure, and sorrow. The fall section is the most conventional because it has both the apprentice and his master each expressing their emotions more while a couple of outsiders look on to see what the master is doing to his apprentice. It would be followed by a very poignant scene of serenity that would involve the two detectives and then comes this chilling moment where the apprentice would later realize about what he would do if he was to return. This would take the film full circle as it ends in a similar manner to the way the film begins as the overall work that Ki-Duk creates is truly exotic but also entrancing film that explores the world of faith.

Cinematographer Baek Dong-hyeon does amazing work with the film‘s gorgeous photography that has a very naturalistic feel for each season from the green look of the spring and summer sections to the more sunnier look of the summer and fall while there‘s an evocative look to the nighttime exteriors as Dong-hyeon‘s work is the film‘s technical highlight. Costume designer Kim Min-Hee does very good work with the costumes from the monk clothes the monks wear to the more modern clothing of the girl. The sound work of Ku Bon-seung is excellent for the way it captures the exotic atmosphere of the location. The film’s music by Park Ji-woong is brilliant for its soothing yet lush orchestral arrangements to play up the serenity of the film.

The film’s cast is incredible for the performances the small ensemble gives such as Choi Min and Ji Dae-han as the two detectives trying to capture the apprentice and Kim Jung-young as the girl’s mother. Ha Yeo-jin is excellent as the girl who is intrigued by the teenage monk as she would begin a love affair with him. In the roles of the apprentice, Kim Young-min, Seo Jae-kyung, Kim Jong-ho, and director Kim Ki-Duk each provide marvelous performances in their respective roles as a young monk in the film. The film’s best performance goes to Su Oh-yeong as the old monk who teaches his apprentice about the ways of the world as there’s a real sense of calmness and wisdom in the performance that is truly unforgettable to watch.

Spring, Summer, Fall, Winter,… and Spring is an outstanding film from Kim Ki-Duk that explores the world of faith and serenity. It is definitely among one of the great films of the 2000s as well as one of South Korean cinema’s finest films as it explores a world that not many people know about. Particularly the world of Buddhism as it gives an audience ideas about how they live and such. In the end, Spring, Summer, Fall, Winter… and Spring is an extraordinary film from Kim Ki-Duk.

What I liked best about this film was the cinematography. I liked the story, but when it went to the second section, and I figured out that each "season" was going to be a part of the boy's life, I was able to pretty much guess what was going to happen in each section (i.e summer = life, winter = death)

It's a film that doesn't require a lot to invest in but it's still engaging enough for audiences.