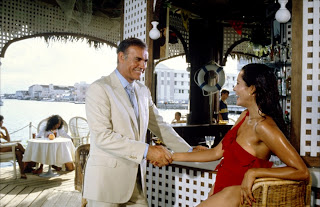 Based on Ian Fleming’s Thunderball that was co-written with Kevin McClory and Jack Whittingham, Never Say Never Again is the story of an aging James Bond returning to action to investigate the theft of nuclear bombs by SPECTRE as he travels to the Bahamas to confront one of its members. Directed by Irvin Kershner and screenplay by Lorenzo Semple Jr., Dick Clement, and Ian Le Frenais, the film is an updated remake of Thunderball as Sean Connery returns to play Bond for one last run. Also starring Kim Basinger, Klaus Maria Brandauer, Barbara Carrera, Bernie Casey, Rowan Atkinson, and Max von Sydow as Blofeld. Never Say Never Again is a compelling yet adventurous film from Irving Kershner.

Following a training exercise, James Bond is sent to a health spa to get in shape where he notices something strange going when a nurse (Barbara Carrera) beats up a patient named Jack Petachi (Gavan O’Herlihy). The nurse is revealed to be Fatima Blush, a member of SPECTRE, who wants Petachi to place nuclear bombs in two cruise missiles for SPECTRE to steal. The mission succeeds as Blush disposes of Petachi as word is sent to SPECTRE’s leader Blofeld who makes a threat to the world about the bombs he has. The news forces M (Edward Fox) to revive the 00 section as Bond is back in the game to find the bombs as he goes to the Bahamas to follow SPECTRE’s second in command in Maximillian Largo (Klaus Maria Brandauer).

Bond meets Blush where he tries to get information only to survive a series of assassination attempts where British official Nigel Small-Fawcett (Rowan Atkinson) reveals that Largo’s yacht went to Nice, France. With help from Felix Leiter, Bond locates Largo’s yacht where he would meet Largo’s mistress Domino Petachi (Kim Basinger) at a spa as he would later see her again at charity event in a casino. Bond also meets Largo for the first time as the two play a 3D video game of world domination where Bond wins as he would complicate things after telling Domino about what really happened to her brother. After another assassination attempt that Bond survived, he and Leiter try to sneak onboard Largo’s yacht where Bond is captured as he is later taken to Palmyra. Learning about what Largo is up to for SPECTRE, it’s up to Bond to once again save the world.

In this updated version of Thunderball, the film is about an aging James Bond who is suddenly asked to get back in the game to stop another plot from SPECTRE involving nuclear warheads and extortion. It’s a story that has Bond taking on new challenges as well as aging where he deals with the fact that he’s almost feeling irrelevant. It would take SPECTRE and a few minor incidents that would allow M to reactivate Bond back into the game as the rules have changed but what Bond must do remains the same. In facing Maximillian Largo, Bond meets someone who is intent on doing something for SPECTRE as he treasures a lot of things including his mistress Domino. When he has to deal with Bond, a real dark side emerges as he realizes how much of a threat Bond is. While the screenplay plays to a formula that is expected, it does manage to create moments of suspense and humor that does work for what is needed.

Irving Kershner’s direction is very extraordinary in the way he opens the film with Bond on a dangerous training exercise as well as the fact that it carries a lot of the tropes of the Bond film. Still, Kershner does manage to create some things that does standout such as the video game sequence to establish the new world Bond has to encounter. Notably as he has to face villains who are keen to rid of him in such grand style as Kershner makes sure that each attempt escalates to see how far they want to get rid of Bond. With locations shot in the Bahamas and the French Rivera, Kershner’s direction always has great compositions to play out the locations as well as the atmosphere in those scenes. Overall, Kershner does an excellent job in creating a Bond film that has all of its attributes as well as a unique take on the character.

Cinematographer Douglas Slocombe does terrific work with the photography from the colorful locations of many of the film‘s exteriors to the soft lenses used in some of the film‘s close-ups. Editor Ian Crafford does nice work with the editing to play up the energy of the action sequences while using more slower cuts to play out its suspense. Production designers Stephen B. Grimes and Philip Harrison, along with set decorator Peter Howitt and art director Leslie Dilley, do fantastic work with the set pieces such as the health spa and the rooms in Largo’s yacht.

Costume designer Charles Knode does brilliant work with the costumes from the clothes the men wear to the array of lavish clothing that Fatima Blush wears to express her wild personality. The visual effects work of David Dryer is pretty good for some of the effects-driven scenes such as the video game battle between Bond and Largo. Sound recorder Simon Kaye does superb work with the sound to play out the atmosphere in the casino scenes as well as some of the action sequences. The film’s score by Michel Legrand is wonderful for its lush, orchestral-driven score that is mixed in with some rhythmic elements to play out the action. The title song by Legrand and lyricists Alan and Marilyn Bergman is a nice, sweeping ballad sung by Lani Hall that plays in the film’s opening credits as well as a more rhythmic version for the closing credits.

The casting by Maggie Cartier is amazing for the ensemble that is created as it includes some notable performances from Valerie Leon as a lady in the Bahamas, Prunella Gee as a spa therapist Bond meets, Saskia Cohen Tanugi as Bond’s French contact, Gavan O’Herlihy as Jack Petachi, and Rowan Atkinson in a very humorous performance as a foreign office representative Bond meets in the Bahamas. Other noteworthy small roles as regular characters of the Bond franchise include Pamela Salem as Miss Moneypenny, Alec McCowen as the witty Q, and Edward Fox as a more stricter version of Bond’s superior M. Bernie Casey is excellent as Bond’s CIA friend Felix Leiter while Max von Sydow is great in a somewhat campy performance as Blofeld.

In one of her early film appearances, Kim Basinger is very good as Largo’s mistress Domino Petachi who is unaware of her boyfriend’s actions as she ends up aiding Bond. Barbara Carrera is superb as Largo’s henchwoman Fatima Blush who tries to get rid of Bond as she brings a lot of exuberance to her character. Klaus Maria Brandauer is terrific as Maximillian Largo by displaying a sense of dark charm to his character as well as the way he is willing to be very evil in his actions. Finally, there’s Sean Connery in a remarkable performance as James Bond where Connery brings a real sense of grit and weariness to the role of an aging Bond who deals with possible irrelevancy and going back to being the man who will save the world.

Never Say Never Again is a marvelous film from Irving Kershner that features an incredible performance from Sean Connery as James Bond. While it may not have some of the elements of other James Bond films, it still has the spirit of Bond in terms of its suspense and action. Notably as it provides a unique take on the character that audiences love. In the end, Never Say Never Again is a fun and stellar film from Irving Kershner.

James Bond Files: The EON Films: Dr. No - From Russia with Love - Goldfinger - Thunderball - You Only Live Twice - On Her Majesty's Secret Service - Diamonds are Forever - Live and Let Die - The Man with the Golden Gun - The Spy Who Loved Me - Moonraker - For Your Eyes Only - Octopussy - A View to a Kill - The Living Daylights - Licence to Kill - GoldenEye - Tomorrow Never Dies - The World is Not Enough - Die Another Day - Casino Royale (2006 film) - Quantum of Solace - Skyfall - SPECTRE - No Time to Die