Originally Written and Posted on Epinions.com on 2/14/09 w/ Additional Edits. 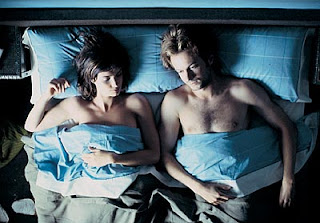 Written and directed by Julio Medem, Lucia y el Sexo tells the story of a waitress who travels to an island following the disappearance of her lover. Hoping to meet her boyfriend's former lover, she learns more about him which involved tragic incidents that changed the lives of everyone who is connected to the man. A mediation on tragedy, sex, and surrealism, it's one of Medem's most poignant and haunting films. Starring Paz Vega, Tristan Ulloa, Najwa Nimri, Daniel Freire, Elena Anaya, and Javier Camara. Lucia y el Sexo is a gorgeous yet haunting film from Julio Medem.

While working at a restaurant as a waitress, Lucia (Paz Vega) receives a troubling phone call from her writer boyfriend Lorenzo (Tristan Ulloa) as she's worried about his behavior in recent months. When she returns home from work, a phone call about Lorenzo along with a note that he's leaving leaves her distraught and upset. Deciding to leave Madrid to deal with Lorenzo's disappearance, she goes to an island that Lorenzo had been to six years earlier where she stayed at a hotel wanting to be alone. It was on that same island that Lorenzo had an encounter on his birthday with a woman (Najwa Nimri) that would prove to be fateful. Upon his return from the island, Lorenzo is having dinner with his friend/publisher Pepe (Javier Camara) where he meets Lucia for the first time. Lucia is a fan of Lorenzo's novels as she says that they will fall in love.

They do as they engage in a sexual affair that is playful yet loving with Lucia reading his stuff and whatever he's working as their relationship would last for years. At the island where Lucia is dealing with grief, she meets a diver named Carlos (Daniel Freire) who takes her to a place that he's staying. The home belongs to Elena, a woman who is a cook that had just moved away from Madrid several years ago. Lucia stays at the home as she recalls the period where he relationship with Lorenzo began to falter five years after they first met. It was around the time Lorenzo discovered that he has a five-year old daughter named Luna (Silvia Llanos) with the woman he had a one-night stand with six years ago. He also learned her name is Elena as he decides to see Luna for himself. He would meet Luna's nanny Belen (Elena Anaya) whom he would have an attraction with. Belen's mother (Diana Suarez) is a former porn star who had just gotten married while Belen is attracted to Lorenzo as they share a mutual love for Luna.

During a night where Belen invites Lorenzo to the house that Elena lives where Elena and her husband were out, they eat dinner with Luna. Lorenzo tells Luna a bedtime story while Belen wants to seduce Lorenzo where things go well until something horrible happens. Lorenzo becomes withdrawn all of a sudden as his behavior reflects the dark mood that he puts into a new novel he's working on. For Lucia, Lorenzo's behavior causes problems for the relationship as it has become extremely troubled. At the island, Lucia continues to wander off alone while having conversations with Elena about escapism where some mysteries unveiled along with who Carlos really is as he's also dealing with some troubles that he's dealing with. With Lucia and Elena both dealing with their own grief, some surprising developments are unveiled as well as the people involved.

The film is largely about grief in some respects but mostly about the power of sex and all of its complications. It's mostly a dramatic mystery with dabbles of eroticism that Julio Medem sets up throughout the script as it moves back and forth from present time and the past. It's a film that relies on memories as a woman deals with the moment she met this incredible man and how it later falls apart where she is now alone on an island. It's at this island where her boyfriend had a one-night stand with another woman who is now living at this same island where the protagonist and this other woman have a certain connection. The script that Julio Medem is complex where the first act is about Lucia's isolation and how she met Lorenzo and fell in love with him. There is also a subplot about Lorenzo's one night stand with Elena and the conception of Luna where the moon plays a big part.

The second act revolves around Lorenzo's discovery of Luna, his brief affair with Belen, and the tragedy they encounter along with Lucia meeting Elena and Carlos at the island. The set-up and structure Medem creates for the script in the first two acts are brilliant as he creates this dreamy yet mystical film of eroticism and mystery that would later unveil itself in the third act. The third act though plays up with a few twists that doesn't entirely work despite its emotional payoff. Yet, it would reveal the outcome for several characters involved in the film.

Medem's direction is truly dream-like from its opening credits sequence of underwater shots to the scenes he shoots in Madrid and the Formentera section of the Balearic islands. Medem's direction in its emphasis on mood reveals the differing worlds where on the island, the people are there seeking comfort from their grief while in Madrid, it's more troubling and intense in its second act though playful in its first act. The film's approach to sex is more explicit with a lot of Hollywood films as it features full-frontal nudity on both sexes while having actors do things that aren't done in Hollywood features. Particularly scenes involving sex toys and other things where in the most explicit material, Medem had to use body doubles which may seems like a cheat. Yet, it worked to create the emotional mood of the sex scenes while the real actors still display their bodies. The direction overall is truly superb from Medem as he creates a moody, impressionistic film that is haunting yet intriguing.

Cinematographer Ivan Aledo does brilliant work with the cinematography from the low-light looks of the interior and exterior nighttime scenes of the Madrid scenes awash in dark yellow lighting to the daytime scenes where it's more colorful but with heightened, tinted lighting schemes. The scenes on the island are more heightened in its tinted look in the day time exterior and interior scenes to emphasis its tone. The nighttime are more intimate and bluer shots of the moon providing a dream-like look to the photography. Editor Kiko de la Rica does great work with the editing from its emphasis on the script's structure in moving back and forth to rhythmic, jump-cut edits for some of the film's sex scenes to capture its energy and feel. Art directors James David Goldmark and Montse Sanz along with set decorator Victor Molero do excellent work with the look of Elena's guest house in all of its diverse look along with the apartment of Lorenzo filled with books and such to present the contrast of Madrid and the island.

Costume designer Estibaliz Markiegi does wonderful work with the sexy dresses Paz Vega wears along with the lingerie that Elena Ayana wears in a seduction scene along with contemporary clothing for the rest of the actors. Special effects supervisor Juan Ramon Molina with digital effects supervisor Alfonso Nieto do great work with the film's minimal visual effects sequence including recreations of the moon and the clouds that provide symbolism for the film. Sound editor Santiago Thevenet and designer Agustin Peinado do excellent work in capturing the sound of locations, notably the island with the waves and winds to provide the atmosphere for the characters and its setting. The film's music from Alberto Iglesias is wonderful for its array of moods and presentation from flute-like music to emphasize its melancholia, ambient textures for its mystery and drama, to more orchestral flourishes for more heightened, dramatic scenes.

The casting by Sara Bilbatua is excellent for its small ensemble that features Diana Suarez as Belen's ex-porn star mother and Silvia Llanos as Luna, the daughter of Elena and Lorenzo. Javier Camara is very good as Pepe, Lorenzo's friend and publisher who provides the connections and secrets that Lorenzo needed to know about Elena and Luna. Elena Anaya is really good as Belen, Luna's nanny who is attracted to Lorenzo as she tries to seduce him that would lead her to guilt over what happens as she becomes withdrawn. Ayana has a great moment in a scene where she's wearing lingerie with ass-less underwear that is just to die for. Daniel Freire is excellent as Carlos, a mysterious man who helps Lucia deal with her grief while carrying some secrets of his own.

Najwa Nimri, who previously appeared in Medem's Los Amantes del Circulo Polar, is great as Elena, a woman dealing with her own grief who takes in Lucia while helping her unveil the mystery of Lorenzo. Nimri's understated performance really shines as she is the performance that really ties the film together. Tristan Ulloa is brilliant as Lorenzo, the man everyone is connected to as he starts off as a playful, fun writer who later discovers a shocking secret that would impact his writing and life. Ulloa's performance is phenomenal for its sense of guilt and withdrawn state as he and Paz Vega have great chemistry. Finally, there's Paz Vega in her international breakthrough performance as Lucia. The woman dealing with grief while exploring her relationship with Lorenzo through good and bad times. Vega's subtle yet playful performance is intoxicating that often featured nude throughout the film while displaying the kind of vulnerability that her character is carrying throughout the film.

Lucia y el Sexo is an excellent, dream-like film from Julio Medem featuring superb performances from Paz Vega, Tristan Ulloa, and Najwa Nimri.  It's a film that is sensually intoxicating and filled with mysteries and moods that will captivate audiences. Fans of Spanish cinema will no doubt consider this film as one of the finest despite its flaws while audiences discovering Paz Vega will see her in one of her better performances away from her lackluster work in American films. In the end, for audiences that want to see a film that is dreamy yet seductive, Lucia y el Sexo is the film to watch.

You did a better job than I did figuring out what the heck was going on. I'll just go the shallow route and say that it's beautiful to look at, and a big part of that is Paz Vega and Elena Anaya.

Who cannot love a naked Paz Vega and Elena Anaya? Especially Elena in that assless lingerie.