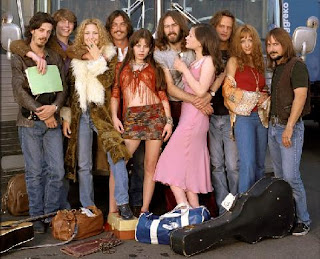 Written and directed by Cameron Crowe, Almost Famous is the story of a teenage rock journalist who gets a chance to write a story for Rolling Stone magazine to cover an up-and-coming rock band on tour.  The film is based largely on Crowe’s experience as a rock journalist in the 1970s as it also explores the music scene of the time.  Starring Patrick Fugit, Billy Crudup, Frances McDormand, Kate Hudson, Jason Lee, Anna Paquin, Zooey Deschanel, Noah Taylor, Jimmy Fallon, Fairuza Balk, and Philip Seymour Hoffman as Lester Bangs.  Almost Famous is an enriching yet outstanding film from Cameron Crowe.

William Miller (Patrick Fugit) is a 16-year old aspiring rock journalist, who lives with his college professor mother Elaine (Frances McDormand), as his fascination with rock music has caught the attention of notorious music critic Lester Bangs.  Bangs gives William an assignment to do a concert review for Black Sabbath as William tries to get backstage where meets a few young ladies who refer to themselves as Band-Aids led by the exotic Penny Lane (Kate Hudson) and a band called Stillwater who let him go backstage.  Intrigued by the band including its guitarist Russell Hammond (Billy Crudup), William later joins Penny to meet them at Continental Hyatt House as her companion in order to see Russell.  After getting a call from Rolling Stone editor Ben Fong-Torres (Terry Chen), William gets a chance to go on the road to cover Stillwater.

Though his mother isn’t keen on the idea, she lets William go on the road as he joins Stillwater and the Band-Aids on tour.  William notices the band trying to make it despite some set-backs and tension between Russell and vocalist Jeff Bebe (Jason Lee) who is paranoid about having William around.  With William’s period on the road being much longer than he had anticipated, he gets a call from Fong-Torres about extending the piece into a cover story.  When Stillwater’s record label brings in Dennis Hope (Jimmy Fallon) to co-manage the band with Dick Roswell (Noah Taylor), Dick and Russell decide to sell the Band-Aids to the band Humble Pie that leaves Penny devastated.

After arriving to New York City, William tells the band about their chance to be on the cover of Rolling Stone as he becomes concerned about Penny who also comes to the city.  After some turbulent moments, William gets some advice from Bangs about what to write as he would reveal everything he had saw about the band he‘s adored for so long.

The film is a semi-autobiographical story of Cameron Crowe’s life as a teenage rock journalist where he covered the music scene of the 1970s during his time with Rolling Stone magazine.  There, he allows the character of William Miller to go through a lot of the things Crowe had experienced such as groupies, rock n’ roll excess, tension, and all of things that went on during a crazy era in rock n’ roll.  Meanwhile, the young William Miller would meet a few people that would intrigue such as an exotic groupie named Penny Lane and a brilliant guitarist whose talents starts to overshadow the rest of his band mates.

Crowe’s screenplay starts off with a prologue of how a young William (Michael Angarano) was introduced to the world of rock n’ roll by his older sister Anita (Zooey Deschanel) who despises her mother’s New Age ideas and flees to become a stewardess.  It then leads into this main narrative of William trying to become a rock journalist at the age of 16 though his mother hopes that he becomes a lawyer.  His love of rock would get him to meet the notorious Lester Bangs who would offer him advice about what not to do in the world of rock journalism such as be friends with the rock star.

During William’s journey, he would unfortunately become friends with Stillwater though the band is wary of him because he represents the enemy they don’t want to play for.  Yet, William is the one who could make them really famous as they’re a band on the rise only to deal with all sorts of tension that is sparked by a t-shirt at one point.  All of this is told from this young man’s perspective who is watching a band he loves just trying to get everything together as he’s intrigued by their guitarist who is aware of the role he’s playing as well as the fact that he’s beyond them musically.

Then there’s Penny Lane, this groupie who is in love with Russell Hammond but also someone who really loves the music.  With the group of girls she’s a part of, she’s in it to have a good time and enjoy the music.  Unfortunately, she knows that Russell is married and a decision that Russell would make in the film’s second half would have a great impact on her forcing William to come to her aid.  It would be a moment where William realizes what he has to do not just as a fan but also as a journalist as he’s set to write a piece that would legitimize him as a true rock journalist.

Crowe’s direction is quite straightforward in terms of compositions but the way he recreates the late 1960s and early 1970s is still magical for the air of nostalgia and authenticity that is presented.  Notably as the film features a lot of references to rock lore such as the Continental Hyatt which was famously known as the Riot House.  Crowe always know how to frame his actors and capture the excitement of what it’s like to be at a rock concert or be in the middle of a discussion as he’s shooting a lot of from William’s perspective.  Notably as Crowe creates shots to reveals William’s on-going struggle to get a story and interview Russell.

One of the key aspects of Crowe’s direction is the way he balances humor and drama where he adds a lot of subtlety to the former.  Notably as he plays to the misadventures that goes on when a band is on the road such as a comical moment when the bus decides to leave Jeff behind.  Since this is a film that is about music in some ways, Crowe also knows how to use music to elevate a scene such as the famous Tiny Dancer sequence where the band sing Elton John’s song following a very crazy moment that had Russell partying with people while tripping on drugs.  It’s one of Crowe’s great moments as the overall work he does with the film is outstanding as he creates what is a truly engrossing coming-of-age tale about a teen and his love for rock n’ roll.

Cinematographer John Toll does brilliant work with the film‘s lush and colorful cinematography to capture the beauty of the various locations inside along with more layered coloring for the interiors as Toll‘s work is a technical highlight.  Editors Joe Husting and Saar Klein do fantastic work with the editing to play out the energy of the concert performances as well as other montages such as the band partying with the Band-Aids.  Art directors Clay A. Griffin, Clayton Hartley, and Virginia L. Randolph, along with set decorator Robert Greenfield, do excellent work in re-creating the look of William‘s home as well as other props to create the feel of the early 1970s.

Costume designer Betsy Heimman does wonderful work with the costumes such as the bellbottoms and clothes the men wear to more lavish clothing the Band-Aids wear.  Sound editor Michael D. Wilhoit does superb work with the sound to capture the atmosphere of the live concerts as well as the intimacy that goes in the bus and backstage meetings.  The film’s score by Nancy Wilson is terrific for its low-key, folk-driven sound to maintain a sense of ambience for some of the film‘s quieter moments.

Music supervisor Danny Bramson creates an incredible soundtrack that features an array of different music from the late 60s and early 70s from acts like Led Zeppelin, Stevie Wonder, Black Sabbath, the Raspberries, Simon & Garfunkel, Yes, the Beach Boys, Elton John, Cat Stevens, David Bowie, and many others.  The original music for the band Stillwater is provided by Nancy Wilson and Peter Frampton, with contributions from Pearl Jam’s Mike McCready, as it is true rock n‘ roll at its finest.

Jason Lee is excellent as Stillwater vocalist Jeff Bebe who tries to deal with the growing attention towards Russell as well as the presence of William.  Philip Seymour Hoffman is brilliant as legendary music critic Lester Bangs who guides William on what to do when going on tour and how to be a true rock journalist.  Kate Hudson is great as the exotic Penny Lane who is so full of life as Hudson brings a lot of energy and charisma to a very eccentric yet loveable character.  Billy Crudup is wonderful as the very talented Russell Hammond who tries to deal with the fact that he’s the most mature member of Stillwater as he finds someone like William whom he can talk to.

Frances McDormand is superb as Williams’ mother Elaine who worries about her son possibly doing drugs while hoping that he becomes responsible.  Finally, there’s Patrick Fugit in a remarkable performance as William Miller as this young rock fan who goes on the ride of his life as he becomes friends with the rock stars and hang out with groupies as it’s a real breakthrough for Fugit.

Almost Famous is an outstanding film from Cameron Crowe.  Featuring a fantastic soundtrack and a top-notch ensemble cast, it’s definitely a film that is very lively and captures the essence of rock n’ roll.  Not only is it one of the best films about music and a place in time but also a very compelling coming-of-age film told from a young fan who loves music.  In the end, Almost Famous is an extraordinary film from Cameron Crowe.

Great review for a fantastic film, it's one of the best films I have seen lately, I just love it, it has a little bit of everything!