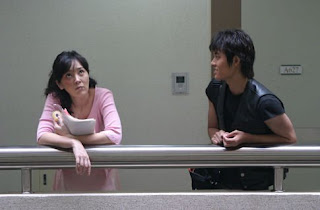 Written and directed by Kim Ki-Duk, 3-Iron is the story of a young drifter whose life changes when he meets a young woman who lives in an unhappy marriage. The film is an exploration into the world of a relationship between a man and a woman lost in their melancholic world. Starring Jae Hee and Lee Seung-yeon. 3-Iron is a compelling romantic film from Kim Ki-Duk.

The film is essentially a love story between this lonely drifter named Tae-Suk (Jae Hee), who breaks into other people’s homes when no one is around, and this model Sun-hwa (Lee Seung-yeon) who happens to be at home when he breaks in as she watches from afar. The two eventually form an unspoken relationship as Sun-hwa looks to Tae-suk as an escape from her unhappy and abusive marriage as she joins him living in other people’s homes until a few encounters that gets them in trouble with the police. This would lead for Tae-Suk is taken to jail and Sun-hwa back to her unhappy marriage where things eventually become stranger in the course of the film.

It’s a film where for the two protagonists don’t say anything throughout the entirety of the film as other characters are the ones with dialogue. Kim Ki-Duk create a film that’s more about actions rather than words in order for the story to move forward. The first half of the story is largely unconventional as there isn’t a lot of dialogue as a lot of the action where Tae-Suk and Sun-hwa break into people’s homes is part of what they do as they begin the day passing flyers onto doors and whatever home doesn’t have a flyer taken is the place they break-in to and stay for a bit. At a home, they would live their for a while and do all sorts of things there while not take anything at the home. Of course, there’s an element of danger into invading one’s home where they could be later met by its inhabitants or find something that is unsettling.

It’s a very interesting first half where there’s not a lot of words said while the second half is more conventional for the fact that there’s other characters involved including Sun-hwa’s husband (Kwon Hyuk-ho). There’s more dialogue that is spoken by the supporting characters while the fates of the protagonists are driven more by these supporting characters that includes the husband and a corrupt detective. Then comes this strange third act where Tae-Suk would do something that would defy convention while Sun-hwa would also start to come into her own as an act of defiance against her husband.

Kim Ki-Duk’s direction is presented with a lot of simplicity in terms of the compositions he creates and how he sets up each scene that is to play out. While a lot of scenes do reveal how Tae-Suk begins the day and then repeat every action all over again when he’s with Sun-hwa, it’s to establish their relationship and everything they do as these lost, silent souls. While a lot of the film takes place in different homes and apartments with some of it shot around the city, Ki-Duk’s direction always has an air of restraint to how the drama unfolds as if he’s making a silent movie in the film’s first half while the editing is methodical in the way things play out. Its second half is sort of conventional in terms of the drama that plays out though it is third act that has Ki-Duk blurring the idea of reality and fiction as far as what the protagonists do based on everything they had just experienced. Overall, Ki-Duk creates a truly entrancing film about love in the strangest of circumstances.

Cinematographer Jang Seong-back does nice work with the photography from the colorful daytime exteriors and some its interiors to more stylish array of lighting in the nighttime scenes. Production designer Art Chungsol does excellent work with the set pieces created such as the varied different homes Tae-Suk and Sun-hwa break into. The sound work of Jung Jin-wook is terrific for how sparse it is used to play up many of the film‘s silent moments. The film’s score by Slvian is superb for its melancholic piano theme to play up the romance to elements of ambient music for more dramatic moments as the soundtrack also includes a song sung by Natacha Atlas that is played throughout.

The film’s cast is brilliant as it features some small roles from Park Dong-jin as a sympathetic detective, Choi Jeong-ho as a vicious jailer, and Kwon Hyuk-ho as Sun-hwa’s workaholic and angry husband. The film’s best performances go to the duo of Jae Hee and Lee Seung-yeon in their respective roles as Tae-Suk and Sun-hwa for the way express themselves without dialogue as they each give very evocative performances told with such restraint in their physicality with Hee providing more intense movements while Seung-yeon has a gracefulness to the way she presents herself.

3-Iron is an extraordinary film from Kim Ki-Duk that features incredible performances from Jae Hee and Lee Seung-yeon. The film is definitely among one of South Korean cinema’s most intriguing films for the way it tells a story in a minimalist approach. It’s also a romantic film that audiences can be engaged by for the way its characters express themselves. In the end, 3-Iron is a marvelous romantic drama from Kim Ki-Duk.

This is a really fine film. You're right, it is a very intriguing, unique romance despite (or because of) its minimalist approach.

Directly behind The Isle as my favorite Kim Ki-duk film.

I much prefer Spring, Summer, Fall, Winter... and Spring over this film but I was entranced by the minimalism of this film. In fact, the film has me revisiting one of my outlines as I'm currently putting one of my other outlines on hold.

I'm definitely to see everything else by Kim Ki-duk.