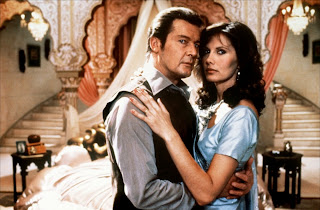 Octopussy is the story of James Bond who tails a general stealing jewels from the Soviet Union that leads him to a mysterious Afghan prince who plans to aid the general to disarm Europe with nuclear weapons. Directed by John Glen and screenplay by George MacDonald Fraser, Michael G. Wilson, and Richard Maimbaum, the film is based on a short story by its creator Ian Fleming as Bond once again face off against new foes with Roger Moore playing Bond for the sixth time. Also starring Maud Adams, Louis Jourdan, Steven Berkoff, Kristina Wayborn, Douglas Wilmer, Desmond Llewelyn, Walter Gotell, Lois Maxwell, Geoffrey Keen, and Robert Brown in his first appearance as M. Octopussy is a fun and engaging film from John Glen.

After the death of agent 009 (Andy Bradford) in East Berlin after trying to capture a Faberge Egg from a circus, James Bond is asked by M to investigate the matter where Bond attends an auction over the real Egg. At the auction, an exiled Afghan prince named Kamal Khan (Louis Jourdan) wins the Egg at the auction but unaware that Bond switched the fake one and taking the real for the government as he travels to India to find out what Khan is up to. After some encounters with Khan and his bodyguard Gobinda (Kabir Bedi), Bond learns that Khan is conspiring with mad Soviet general Orlov (Steven Berkoff) who wants to expand the Soviet borders into Europe much to the dismay of his superiors including General Gogol (Walter Gotell).

After escaping Khan’s prison, Bond learns from his contact Vijay (Vijay Amritraj) about an island that only a cult of women live in where Bond meets its leader Octopussy (Maud Adams). Learning that she’s a wealthy smuggler who also likes to have other business ventures including a circus, Bond believes that Khan is trying to set her up in an upcoming deal where Orlov plans to take real diamonds as part of a ruse. Going to East Berlin, Bond sees what Orlov and Khan are up to as he decides to stop them from deactivating an atomic bomb on a U.S. air base.

The film essentially has James Bond tackling an Afghan prince and a Soviet general in a diamond smuggling operation that will help fund a disarming plan against Europe. It’s a film where Bond goes to India and Berlin to stop another attempt at World War III from happening while he meets a wealthy diamond smuggler whose association with this exiled prince has her unaware of the ruse that is around her. It’s a plot that simple but at times is hard to follow because of the actions of Khan and General Orlov where it takes a while for their plan to finally come into fruition. They’re interesting villains although the Khan character isn’t as well-defined since his motivations, other than profit, aren’t clear.

One character who is compelling is the titular character who is revealed to be this woman that wants to create a safe haven for other women while wanting to do business legally other than her usual work in diamond smuggling. She’s also a woman who can handle her business though she’s unaware that she’s being played by Khan in a smuggling operation that she thinks will go her way. It’s one of the screenplay’s highlights although at times, it is uneven in tone as it wants to be a full-on suspense film with humor. It’s just that the humor leads to moments where things feel too ridiculous at times.

John Glen’s direction is engaging from the thrilling opening prologue scene where Bond infiltrates a base as well as many of the film’s action sequences that includes a chase scene through Udaipur, India. Glen’s direction is definitely big in what is expected in terms of action and suspense scenes while he does try to keep the humor subtle. Yet, there’s moments where the humor doesn’t really work such as Bond in a clown suit and a gorilla costume to evade foes where it reaches to the level of silliness. Despite the flaws the film carries, John Glen does manage to succeed in creating a James Bond film that has all of the sense of adventure and suspense that is needed to make it thrilling enough for its audience.

Cinematographer Alan Hume does excellent work with the film‘s photography from the gorgeous nighttime shots in the Indian locations to the more colorful locations in Berlin. Editors Peter Davies and Henry Richardson does superb work with the editing by creating rhythmic cuts to many of the film‘s action sequences as well as more straightforward cuts to the film‘s dramatic and suspenseful moments. Production designer Peter Lamont, with set decorator Jack Stephens and art director John Fenner, does brilliant work with the set pieces such as the homes of Khan and Octopussy that are lavish to complement their personalities.

Costume designer Emma Porteus is terrific for the lavish wardrobe Octopussy and her group of women wear to the Indian garb some of the men wear in the Indian scenes. Special effects supervisor John Richardson does fantastic work with some of the effects created in some of the film‘s action scenes such as the opening prologue with the plane. Sound editor Colin Miller does nice work with the sound to play up the atmosphere of the Indian locations as well as the layered work in the action scenes. The film’s score by John Barry is very good for its orchestral score from the thrilling pieces to play up the action to the lush string arrangements for some of the film’s romantic moments. The original song All Time High by Barry and Tim Rice that is sung by Rita Coolidge is a fine mid-tempo song highlighted by its string arrangements and Coolidge’s calm yet soaring vocals.

The casting by Debbie McWilliams is wonderful for the ensemble cast that is created as it features some memorable small performances from Andy Bradford as Agent 009, Douglas Wilmer as a MI6 operative Bond accompanies to the auction, David and Anthony Meyer as Khan’s knife-throwing henchmen, Kabir Bedi as Khan’s bodyguard Gobinda, and Michaela Clavell as Miss Moneypenny’s assistant. Bond regulars such as Geoffrey Keen as defense minister Frederick Gray, Walter Gotell as General Gogol, and Lois Maxwell as Miss Moneypenny are all very good while Desmond Llewelyn is excellent as usual as the inventive Q as he gets to be involved in the film’s climatic action scene. Robert Brown is terrific as M as Brown brings a very different approach to the character as a more stern version of the character. Kristina Wayborn is very good as Octopussy’s aide Magda while Vijay Amritraj is also good as Bond’s Indian contact Vijay.

Steven Berkoff is amazing as the mad General Orlov who is intent on ensuring the Soviet Union’s power by his desire to start World War III. Louis Jourdan is quite fine as Kamal Khan by displaying a sense of charm to the character although it’s a very un-memorable role in comparison to the other Bond villains of the past. Maud Adams is superb as Octopussy by displaying a sense of grace and determination to a character that just wants to do what is right for herself while being intrigued by Bond. Finally, there’s Roger Moore in a stellar performance as Agent 007 where Moore displays his sense of charm and wit to the role also proving to be very physical in dealing with foes.

James Bond Files: The EON Films: Dr. No - From Russia with Love - Goldfinger - Thunderball - You Only Live Twice - On Her Majesty's Secret Service - Diamonds are Forever - Live and Let Die - The Man with the Golden Gun - The Spy Who Loved Me - Moonraker - For Your Eyes Only - A View to a Kill - The Living Daylights - Licence to Kill - GoldenEye - Tomorrow Never Dies - The World is Not Enough - Die Another Day - Casino Royale (2006 film) - Quantum of Solace - Skyfall - SPECTRE

This was the last of the Bond films that I saw to complete all of them (several years ago). For some reason I never seemed to catch it when TNT or TBS were showing their Bond marathons. I thought it was okay.

Right now as I just completed the Roger Moore era of my marathon. Of the official Bond films, this is my least favorite. Not just because of the plot but also a very unmemorable villain.

Roger Moore was geting too old to play Bond in 83, and the story is unrealistic, but Octopussy is so much fun to watch in my opinion that I still love it.
Maybe Louis Jourdan was miscast as villian, because he often played the charming romantic roles ,Letter from an unknown woman (1948) is one I recall.

@Chris-It's got its flaws but certainly enjoyable. The one thing that keeps Bond so much fun to watch is the fact that it's always adventurous. I agree that Moore was getting old for the role but he still managed to pull off a nice performance.