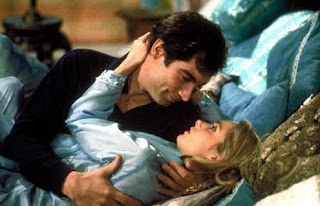 Based on Ian Fleming’s short story, The Living Daylights is the story of James Bond traveling all over the world to retrieve a defected Soviet general where Bond finds himself being conned in the process. Directed by John Glen and screenplay by Richard Maimbaum and Michael G. Wilson, the film marks a new shift in the Bond story as it returns to more grittier territory as it is also the first film to star Timothy Dalton as James Bond. Also starring Maryam d’Abo, Joe Don Baker, Art Malik, John Rhys-Davies, Jeroen Krabbe, Geoffrey Keen, Desmond Llewelyn, Caroline Bliss, and Robert Brown as M. The Living Daylights is a fantastic action-adventure film from John Glen.

In Bratislava, Bond aids fellow agent Saunders (Thomas Wheatley) to handle the defection of Soviet general Georgi Koskov (Jeroen Krabbe) by helping him escape to Austria. After Bond targets the assassin who is revealed the cellist Kara Miloy (Maryam d’Abo), Bond only shoots the gun as he successfully gets Koskov to Austria. Returning to London, Bond and his superiors hear Koskov’s claims about new KGB leader General Pushkin (John Rhys-Davies) reviving an old policy that targets spies including Bond. Yet, a break-in into Koskov’s secret hideout has Koskov captured as Bond is assigned to track down Pushkin and retrieve Koskov though Bond remains suspicious as he and M know Pushkin.

Bond returns to Bratislava to track down Miloy as he notices that she’s being followed by the KGB where he finds her gun in her cello trunk where he makes a discovery. After helping Miloy escape to Austria to avoid the KGB, Bond asks Saunders to figure out where Koskov bought Miloy’s cello as Bond learns that it was paid for by an arms dealer named Whitaker (Joe Don Baker). This adds more suspicions as Bond finally confronts General Pushkin in Tangiers as he would make moves to figure out what is really going on. After confessing to Miloy about what he’s really doing, Bond and Miloy are captured where they learn the truth about really happened to Koskov. With the help of a local Mujahideen leader in Kamran Shah (Art Malik), Bond would stop an illegal transaction from happening and uncover the truth about Koskov.

The film is essentially the story of James Bond trying to uncover a mysterious plot in the re-capturing of a defected Soviet general as he learns that the defection plan was really a ruse for something far more troubling. This would have Bond track down a Czech cello player, who is the girlfriend of the defected general, as she’s revealed to be a pawn in this defection plan where she would aid Bond in uncovering the truth. This plot would also involve illegal arms deals, extortion, and drug trades where Bond would eventually help the Mujahideen in defeating a group of Russians.

The screenplay succeeds in balancing both action and suspense as the screenwriters definitely wanted to do something that is a bit different as James Bond is a bit more ruthless in his pursuits. Even as he maintains an air of professionalism in his role while he’s also willing to take some risks in uncovering the truth. Helping his is Kara Miloy who is essentially this woman that’s been kept in the dark about what is happening as she would eventually become a more resourceful woman who can fight back and get things done. Then there’s General Koskov who is this ambiguous figure that makes all of these claims but there’s something about him that has Bond wondering if he’s really telling the truth. Even as Bond learns what he’s really up to as it would involve this arms dealer profiting from the Soviet-Afghan conflict.

John Glen’s direction is definitely superb for the way the film opens as it involves this training exercise that goes wrong where it would introduce Bond to do what is necessary. With the film largely shot in Vienna and Morocco, Glen does maintain a lot of straightforward shots of the locations while creating some spectacular action sequences in the Alps where it is about the stakes as Glen takes his time to capture its intensity. While there isn’t much humor in this film as it’s mostly restrained, the film’s suspense makes up for it in the way Glen builds it up and create some silent moments where Bond would play investigator to make his discoveries. Overall, Glen creates a marvelous and engaging action-suspense film that does more than what is expected in a Bond film.

Cinematographer Alec Mills does excellent work with the photography from the wonderful look of many of the film‘s locations including the nighttime scenes in Vienna to the array of lights in Bond‘s climatic confrontation with Whitaker. Editors John Grover and Peter Davies do nice work with the editing by creating lots of rhythmic cuts for the film‘s action scenes as well as more methodical ones for the film‘s suspenseful scenes. Production designer Peter Lamont, along with set decorator Michael Ford and art director Terry Ackland-Snow, does superb work with the set pieces from the home base of Whitaker to Q’s gadget room in the secret MI6 base.

Costume designer Emma Porteus does terrific work with the costumes from the dresses that Kara wears to the uniforms that Whitaker wears. Special effects supervisor John Richardson does splendid work with the visual effects in some of the film‘s action scenes. Sound recorder Derek Ball does wonderful work with the sound to capture the intensity of the action scenes as well as the atmosphere of the orchestra concert scenes. The film’s score by John Barry is brilliant for its mixture of orchestral flourishes and electronic rhythms to give the Bond themes a new sense of flair as they add to the film’s action and suspenseful moments. The soundtrack includes some classical pieces by Mozart, Tchaikovsky, Dvorak, and Alexander Borodin as well as a couple of songs by the Pretenders’ Chrissie Hynde as well as the wonderful mid-tempo title song by A-ha.

The casting by Debbie McWilliams is phenomenal for the ensemble that is created as it features some notable small roles from Virginia Hey as General Pushkin’s mistress, Julie T. Wallace as Bond’s Bratislava contact, John Terry as Bond’s CIA friend Felix Leiter, Thomas Wheatley as Bond’s aide Saunders, and Andreas Wisniewski as the henchman Necros. There’s also some terrific performances from such Bond regulars like Desmond Llewelyn as Q, Robert Brown as M, Caroline Bliss in her first appearance as Miss Moneypenny, and in their final appearances, Geoffrey Keen as defense minister Frederick Gray and Walter Gotell as former KGB head-turned diplomat General Gogol. Art Malik is excellent as local Mujahideen leader Kamran Shah who helps Bond in Afghanistan while John Rhys-Davies is superb as new KGB head Leonid Pushkin.

Joe Don Baker is wonderful as the scheming arms dealer Whitaker who loves guns and war as he tries to engineer a plot to profit from conflict. Jeroen Krabbe is great as General Georgy Koskov who tries to create things where he makes Bond suspicious and also leave Kara in the dark over his ideas. Maryam d’Abo is very good as Kara Miloy as a woman who has been kept in the dark by her boyfriend as she aspires to play cello all over the world as she would aid Bond in his plans to stop these schemes. Finally, there’s Timothy Dalton in a marvelous performance as James Bond. Dalton brings a real sense of cool to his character as well as restrained aggression in the way he handles his situations as there’s a bit of a dark edge to Bond as Dalton really brings a fresh take on Bond.

The Living Daylights is an incredible film from John Glen that features Timothy Dalton in a top-notch performance as James Bond. The film is definitely a return of sorts to simpler, suspenseful Bond as it strays away from the silly humor of the Roger Moore period. The film is also different for giving Bond more grit as he is more fearless in his pursuits as well as giving some of the sexual interplay a bit of break in the wake of AIDS. In the end, The Living Daylights is an extraordinary film from John Glen.

James Bond Files: The EON Films: Dr. No - From Russia with Love - Goldfinger - Thunderball - You Only Live Twice - On Her Majesty's Secret Service - Diamonds are Forever - Live and Let Die - The Man with the Golden Gun - The Spy Who Loved Me - Moonraker - For Your Eyes Only - Octopussy - A View to a Kill - Licence to Kill - GoldenEye - Tomorrow Never Dies - The World is Not Enough - Die Another Day - Casino Royale (2006 film) - Quantum of Solace - Skyfall - SPECTRE

Some time in the 1990s it became fashionable to crap all over Timothy Dalton as Bond, and I've never understood this. I liked him quite a bit in the role.

In fact, almost everything that critics said about Daniel Craig were the same things said about Dalton when he took on the role - "brings some much needed gravity to the role", "a grittier Bond", "updates the role for the modern era", etc.

I just re-watched Licence to Kill yesterday and I think Dalton got a raw deal. He never really got the chance to really create a Bond that was more grounded, more gritty, and more to the point. I really think Dalton is really underrated. If it hadn't been for those legal disputes, I think there would've been one more Bond film that he would've been in.