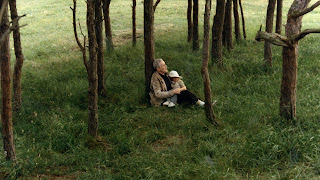 Written and directed by Andrei Tarkovsky, The Sacrifice is the story about a man searching for faith and humanity just as World War III is about to happen. At a gathering in his home, the man begins to question into how he can restore peace in a troubled world. The film marks a return of sorts to Tarkovsky’s fascination with faith while continuing his theme with the flaws of humanity. Starring Erland Josephson, Susan Fleetwood, Allan Edwall, Gudron S. Gisladottir, Sven Wollter, Valerie Mairesse, Filippa Franzen, and Tommy Kjellqvist. The Sacrifice is a compelling yet mesmerizing drama from Andrei Tarkovsky.

It’s the birthday of Alexander (Erland Josephson) as he spends the day with his young son that he calls Little Man (Tommy Kjellqvist) where they meet up with the postman Otto (Allan Edwall) who has been invited to the party. Organizing the small party is Alexander’s wife Adelaide (Susan Fleetwood) as she’s joined by their teenage daughter Marta (Filippa Franzen) and their two maids in Julia (Valerie Mairesse) and Maria (Gudron S. Gisladottir). Also at the party is their friend Victor (Sven Wollter) as the day seems to be fine until noises of jet planes fly over the house. With the news that World War III has just begun, everyone starts to react about the news as Alexander ponders what he must do as he asks God for help.

Seeking answers in this horrific time where no one can leave home, Alexander asks Otto about what to do as he suggests to go to Maria’s home for answers. Alexander would discuss about memories about his mother as he is ravaged with sorrow over the end of the world. Even as he would do something that he thinks will save his family and friends from the world coming to an end.

What happens when the world is about to end due to the arrival of World War III where one is hoping to be spared from total catastrophe? That’s what Andrei Tarkovsky is asking in this film about a man dealing with a world that’s about to end as he begins to question ideas of faith and humanity. Even as his family and friends all start to have their own terrifying reactions to this news. This would prompt this man to figure out how to save everyone from this horror where he eventually finds the answer as it would take something big for him to make this sacrifice.

Tarkovsky’s screenplay has a more conventional structure than any of his previous films in the way many of the film’s plot-points and action would play out. The first act is about Alexander’s time with his son and the preparation for the birthday. The second act is about the news of World War III happening as most of the characters see it on TV where some just completely fall apart while others are just trying to figure out how to live these remaining days. This is where Alexander would try to figure out how to save everyone as he prays to God and eventually go to Maria for help. The third act is this strange meeting with Maria that is followed by a series of surreal of strange moments that would drive Alexander to do something that would be this sacrificial act.

Tarkovsky’s direction is truly hypnotic in the way he presents the film with many of his visual traits to help tell the story of a man living in what could be the last days of the world. From the long tracking shot where the actors are in a wide shot to walking closer in a medium shot as well as lingering glances of scenes of nature. The direction is fluid in its imagery from the way he shoots close-ups of paintings to these entrancing compositions of the way he frames his actors in a scene. Even in subtle moments such as Alexander lying in the grass as his son is playing around or the film’s final image that would say a lot.

Scenes such as the family running inside the house to hear the sounds of jet fighters flying over the house is framed with such grandeur as Tarkovsky is focused on an object to display the changes that is to come. Some of the surreal moments in the film’s second half involves Alexander levitating with Maria to establish the sense of longing and sorrow that he’s feeling. This would lead to a very climatic scene where it involves a long take with wide compositions to present something that is chaotic that mixes both beauty and horror. Notably as the film takes place in this Swedish island where there’s something serene about the place but also filled with despair. Overall, Tarkovsky crafts a ravishing yet emotionally-intense drama about the end of the world.

Cinematographer Sven Nykvist does a brilliant job with the film‘s photography from the very colorful shots of the daytime exteriors for many of the film‘s first and third act to the air of grey in the second act where everything starts to look very dark as it includes some monochrome shots of the world outside of the island. Editors Andrei Tarkovsky and Michal Leszcylowski do fantastic work with the editing by maintaining a very straightforward approach to the cutting while going for a more methodical approach to the pacing. Production designer Anna Asp does amazing work with the design of the house in the film as it plays as a character in the film as it’s a truly gorgeous house filled with lots of things.

Costume designer Inger Pehrsson does wonderful work with the costumes from the suits some of the male characters wear to the more stylish clothing that Adelaide and Martha wear. The sound work of Owe Svensson is excellent for the intimacy that is created in some of the film’s quieter moments along with the use of music to the loudness of the jet fighters passing by to display the sense of chaos that occurs in the film. The film’s soundtrack features music by Johann Sebastian Bach that is played in the opening and closing moments of the film along with Swedish and Japanese folk music that is played quietly in the film.

The casting by Claire Denis, Priscilla John, and Francoise Menidrey is superb for the ensemble that is created as it features some noteworthy small roles from Tommy Kjellqvist as Alexander’s young, quiet son Little Man, Filippa Franzen as Alexander’s teenage daughter Martha, Valerie Mairesse as the family maid Julia, and Sven Wollter as family friend/doctor Victor. Gudron S. Gisladottir is excellent as mystical Maria who tries to understand Alexander’s troubled mind. Susan Fleetwood is wonderful as Alexander’s wife Adelaide who is confused by Alexander’s behavior while being anguished over the world coming to an end. Allan Edwall is great as Otto the postman who gives Alexander ideas while having some great monologues about death and such to reflect the chaos that is happening. Finally, there’s Erland Josephson in a brilliant performance as Alexander from the monologues he delivers to the sense of torment he presents as he’s aware of the world that’s in chaos as it’s one of his most enduring performances.

The 2011 Region 1 2-disc DVD from Kino Lorber presents the film in an anamorphic widescreen present to preserve its 1:66:1 theatrical aspect ratio with 2.0 Mono sound and English subtitles. The first disc of the DVD features the film in its entirety while the second disc of the DVD is filled with a few special features. Among them is the documentary Directed by Andrei Tarkovsky.

Directed by Michal Leszczylowski, Directed by Andrei Tarkovsky is a documentary film about the making of The Sacrifice as well as exploring Tarkovsky‘s working methods. The 99-minute documentary also features narrated excerpts of Tarkovsky’s book Sculpting in Time told by actor Erland Josephson to express Tarkovsky’s views on cinema and the art of film directing as well as an interview with Tarkovsky‘s widow Larisa Tarkovskaya who was also Tarkovsky‘s assistant director for much of his career.

The documentary would explore many of Tarkovsky’s methods into directing scenes as he collaborates with renowned Swedish cinematographer Sven Nykvist for the film as Tarkovsky is seen directing his actors, with a translator, and discuss certain scenes. Tarkovskaya’s interviews reveal notes from Tarkovsky’s diary about the writing of The Sacrifice while the film also features rare interviews with Tarkovsky talking about his views on film. It’s a documentary that Tarkovsky fans must seek-out as it’s definitely an interesting film for anyone that is into the works of Andrei Tarkovsky.

Other special features for photo galleries for both The Sacrifice and Directed by Andrei Tarkovsky as well as trailers for films like The Return, The Rider Named Death, The Vanished Empire, and Ward #6.

The Sacrifice is an outstanding film from Andrei Tarkovsky that features an incredible performance from Erland Josephson. The film is definitely one of Tarkovsky’s more accessible films for the way he presents the idea of a world coming to an end as well as asking big questions about faith and humanity. It’s also a film that isn’t afraid to capture a world in chaos as it’s presented with an air of beauty that isn’t seen much in films. In the end, The Sacrifice is a grand yet exhilarating film from Andrei Tarkovsky.

I saw this as it came out, but to be honest I don't remember much of it, even though I used to love Tarkovskij back in the days. Anyway: this autumn we're going to run an Erland Josephson theme at my local film club and this one will be included, which means that I'll get the opportunity to watch it on a big screen again. Rare and awesome!

I hope you have fun with the Erland Josephson marathon. The dude is an amazing actor and I think this is my second favorite performance from him with Scenes from a Marriage being my favorite.

@Stephanie-This one is more accessible yet very rewarding in its themes.