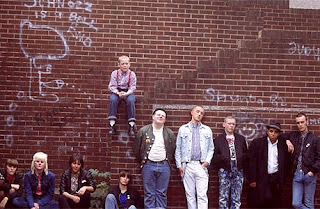 Written and directed by Shane Meadows, This is England is the story about a young boy who becomes part of the skinhead culture of the early 80s only to later join up with a more extreme group of skinheads. The film explores a period in the early 80s where a boy feels lost following his father’s death in the Falklands War as he comes of age in the new culture he becomes a part of. Starring Thomas Turgoose, Joe Gilgun, Andrew Shim, Vicky McClure, Stephen Graham, and Rosamund Hanson. This is England is a harrowing yet compelling film from Shane Meadows.

Lost in the death of his father from the Falklands War, 12-year old Shaun Field (Thomas Turgoose) comes across a group of skinheads led by Woody (Joe Gilgun) who notices the troubled Shaun. Shaun befriends Woody and the fellow skinheads that include Milky (Andrew Shim) as he later becomes part of a group of fun-going skinheads who likes to vandalize abandoned homes and such. One night at a party, Woody’s old friend Combo (Stephen Graham) makes a surprise visit as he returns from prison hoping to lead the group. When he expresses more nationalist and racist views, Woody decides to leave the group along with Milky and a few others though Shaun decides to stay.

With Combo taking Shaun in, Shaun and Combo attend nationalists meetings that expresses views of racism as Shaun feels like he’s doing something as Combo tells him it would make Shaun’s dad proud. After some antics to express their views including robbing a shopkeeper (Kriss Dosanjh) to get things for a birthday party for Smell (Rosamund Hanson) as the others including Woody feel uncomfortable towards Combo. When Combo tries to make his advances towards Woody’s girlfriend Lol (Vicky McClure), the result would later lead to disaster during a moment with Shaun, Milky, and a few others where Shaun would witness something terrifying.

The film is a coming-of-age story about a 12-year old boy lost in his grief and feeling alone where he becomes part of a skinhead group to feel like he belongs somewhere. When an older skinhead returns from prison, the boy tags along with him to fulfill the lost father figure that he craved for only to venture into a much darker world. It’s a story largely told from the perspective of a boy who feels like the world has become complicated as he really feels uncomfortable talking about his dad. When he’s part of this group of young skinheads, there is a sense like he’s not alone as he just goes out there and have fun only to later be part of something more extreme.

The screenplay, that features un-credited contributions by Paddy Considine, is based on Meadows’ own childhood experiences during the early 1980s as it reflects on a very tumultuous period during Margaret Thatcher’s tenure as prime minister. It’s a script that starts off being a study of alienation for a boy who doesn’t fit in with certain cliques only to stumble upon this small group of skinheads who feel like they don’t fit in with anything. Then it becomes a story about family where this boy feels like he finally belongs somewhere until Combo arrives and starts to shake things up. Combo is a very interesting character as he’s this man who just returned from prison and feels very slighted by what’s happening in the country as he riles Shaun up by mentioning the Falkland Wars. He would become this father-figure of sorts for Shaun though Combo acts more like a kid than an adult.

Shane Meadows’ direction is mesmerizing for the way he re-creates early 1980s England as it is set in a world that is outside of London. Shot in Nottingham, Meadows creates a film where it’s about this alienation where these kids and young adults feel like they’ve been ostracized by Thatcher and the rest of Britain. Meadows opens the film with newsreel footage of what was happening at the time to establish this gap between what is happening where things are both good and bad at the time of Thatcher. This then leads to a scene where Shaun is waking up hearing Thatcher’s words as he walks up to school where he would get into a fight.

The direction is always fluid and engaging for the way Meadows presents the scenes as if he’s making a film that looks like it’s from the 1960s although it set in the early 1980s. Meadows also creates a very sense of freedom for the way he makes his actors interact with one another or to create some form of chaos. There’s also an intimacy in the way Meadows frames his actors in a shot to establish the sense of alienation they’re feeling. When it’s in a group shot, there’s a sense of something troubling will happen to keep the energy of the film going. Overall, Meadows creates a truly engrossing coming-of-age film about a boy who becomes part of a unique cultural group.

Cinematographer Danny Cohen does brilliant work with the film‘s very straightforward yet grainy photography to give the film a very timeless look as if it was shot in the 60s with some colorful scenery for the exteriors while the interiors have a more intimate setting. Editor Chris Wyatt does terrific work with the editing by utilizing rhythmic cuts for some of the intense moments as well as creating montages for some of livelier moments of the film. Production designer Mark Leese and art director Caroline Grebbell do fantastic work with the set pieces such as the graffiti in some of the locations to array of 80s objects in some of the rooms the characters encounter.

Costume designer Jo Thompson does wonderful work with the costumes from the jeans and suspender look of the skinheads to the punk-new wave look of Smell. Sound designers Matt Hall and Ben Harvey, along with sound editor Greg Marshall, do superb work with the sound to complement the surroundings of the locations as well as the atmosphere of some of the party scenes. The film’s score by Ludovico Einaudi is excellent for its plaintive and melancholic piano score to play up the drama. Music supervisor John Boughtwood creates a phenomenal soundtrack that is a mix of 80s pop from acts like Dexy’s Midnight Runners and Soft Cell to a wide array of reggae music ranging from Toots and the Mayalls, the Specials, Lee “Scratch” Perry, and many others along with a soul piece by Percy Sledge.

The casting by Des Hamilton and Louise Meadows is amazing for the ensemble that is created as it features some very memorable small roles from Jack O’Connell as Pukey, Andrew Ellis as Gadget, Chanel Cresswell as Lol’s sister Kelly, Kriss Dosanjh as the Indian shopkeeper Mr. Sandhu, and Jo Hartley as Shaun’s mother Cynthia. Vicky McClure is very good as Lol while Rosamund Hanson is wonderful as the kind, new wave girl Smell. Andrew Shim is excellent as the black skinhead Milky while Joe Gilgun is terrific as the kinder, inviting skinhead Woody. Stephen Graham is brilliant as the charming but extreme Combo who spouts nationalist ideals as he takes the young Shaun under his wing. Finally, there’s Thomas Turgoose as the young Shaun where Turgoose gives a marvelous performance as a troubled boy feeling lost as he finds family in this group of skinheads.

This is England is an extraordinary yet eerie film from Shane Meadows. Featuring a top-notch ensemble cast including outstanding performances from Thomas Turgoose and Stephen Graham. It’s a film that revels into the harsh world of Thatcher-era Britain where things were in chaos and people felt like they weren’t part of the country. It’s also a compelling coming-of-age film that is told from the perspective of a boy growing in those times. In the end, This is England is a tremendous film from Shane Meadows.

Great review. I love This Is England and most of Shane Meadows films. Have you seen This Is England 86 or 88? Both are not as good as the film is but really tie up some of the questions.

I haven't seen the TV series since I don't have any other BBC channels in the U.S. other than BBC America.

I've been meaning to see this for a long time, maybe I should pick up next time i'm in the university library! great review, thanks!

@Diana-It's a grim film at times but it's very compelling about what was going on in England during the early 80s.