Aguirre, the Wrath of God

Originally Written and Posted at Epinions.com on 1/1/07 w/ Additional Edits. 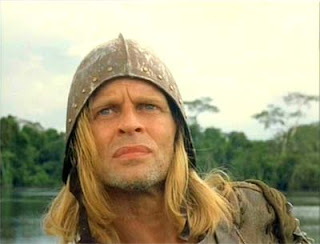 Written and directed by Werner Herzog, Aguirre, der Zorn Gottes (Aguirre: The Wrath of God) tells the story of the travels of a crazed conquistador in search of the lost city of gold. Starring Klaus Kinski, in his first of films with Herzog, in the title role. The film is a mediation on madness and ambition through the harsh jungles of the Amazon. Shot on location in Macchu Picchu and the Peruvian jungles, the film reveals the harsh realities of nature through the eyes of a madman. Also starring Helena Rojo, Cecilia Rivera, Alejandro Repulles, Ruy Guerra, Del Negro, Peter Berling, Dany Ades, and Armando Polanah. Aguirre, der Zorn Gottes is a harrowing, psychological masterpiece from Werner Herzog.

It's the December of 1560 as a group of conquistadors, led by Bonzalo Pizarro (Alejandro Repulles), are walking down to the path of the Andes mountains after defeating the Incan empire. Hoping to return home or to a Christian sanctuary, Pizarro and his men are aware that the Indian slaves they acquired are dying and the food is becoming scarce. Pizarro lets Ursua (Ruy Guerra) in charge with Don Lope de Aguirre, second-in-command. Accompanied by Ursua's mistress Inez (Helena Rojo), Aguirre's daughter Flores (Cecilia Rivera), a small band of Indians, a monk named Brother Gaspar de Carvajal (Del Negro), and several soldiers, Ursua and Aguirre take their group of men into the harsh rivers of the Amazon. With the rivers becoming more intense and a raft filled with seven soldiers and two oarsman stuck on an eddy, the two other rafts stop on the other side of the shore wondering what to do.

Sending one of his men, Armando (Armando Polanah), to go down river and find a crossing to the other side, Ursua hopes to save the men stuck in the eddy. The next day, six of the soldiers and an oarsmen was killed as Armando noticed that two of them are missing as on their way back, one of them was trapped and immediately killed. Ursua feels that this mission has brought nothing but bad luck but Aguirre believes that the lost city of gold known as El Dorado is somewhere in the Amazon. Wounding Ursua and taking Armando as prisoner, Aguirre takes control making Guzman (Peter Berling) the new leader as he crowns him the new Emperor of El Dorado with the hope of conquering Spain in the same way Hernando Cortez did with Mexico.

After Armando breaks himself free from his prison, a public trial was held as Guzman decides to let Ursua go but without any power and his wealth to be split among soldiers and everyone else. With Ursua on board but refusing to speak, the remaining soldiers plus Inez, Flores, and Gaspar ride on a new raft as they trek onto the treacherous rivers of the Amazon. With a horse on the raft, things become tense with food becoming scarce as Guzman feasts on everything from fish that he took after an encounter with an Indian who was killed for spitting on the Bible. Though the quiet threat of other Indians surrounding the jungle is still making everyone else uneasy, Aguirre hopes to find and rid of them. Then when a brutal murder occurs on the raft, morale becomes pretty low with Aguirre now running things as Inez chose to leave. With people dying every day due to fever or the attacks of the Indians, Aguirre moves further into the river in which he continues on this absurd, suicidal journey to find El Dorado.

Largely inspired by the famed Joseph Conrad novel Heart of Darkness, about a journey on the Congo rivers, clearly is instilled into the mind of Werner Herzog. In many ways, the film&#146s themes of greed and madness is really small when being compared to what the film is really all about. Man vs. nature in which Herzog seems to have a darker, cynical view about nature. Filled with very little dialogue and focusing on the emotions of the people on the boat, the film is told in two perspectives from voice-overs. Most of the voice-over is told from the perspective of Gaspar as if he's recalling everything in his diary. The second is from Aguirre whose mind has reached beyond the depths of reality into something that is indeed, maddening.

If Herzog's minimalist script builds a momentum into the doom that's to come. It's his directing that reveals the complex world of the Amazon jungle. While it's a world filled with beauty, there's also something sinister beneath it in its heart. Again, it comes from Heart of Darkness where Herzog explores and observes the behaviors of the characters while dealing with their complex`morale as they're riding into a suicidal journey led by this ambitious madman. It's in Herzog where the film reveals the cruelty that is in Mother Nature and how neglectful humanity is towards it.

Helping Herzog with his troubling vision is cinematographer Thomas Mauch whose hand-held camera work reveals the beauty and ugliness that is the Amazon jungle. Mauch's photography truly captures the complexity of the environment with its array of colors and light where it looks and feels like the Amazon. Editor Beate Mainka-Jellinghaus brings a stylized approach of editing with some jump-cuts and perspective cutting while adding a flow that is elliptical yet deliberate to build the momentum of the story in its madness. The sound work by Herbert Prasch is wonderfully brilliant in capturing the atmosphere and horror that is the Amazon jungle. The film's music features comical yet vibrant flute music in a scene accompanied by an Indian playing the flute. Most of the film's score is largely dominated by longtime Herzog composers Popol Vuh with their haunting, progressive-rock driven score filled with large arrangements of vocals and eerie synthesizer music.

The film's cast is wonderfully assembled with notable small performances from Alejandro Repulles as Pizarro, Dany Ades as the irritant Perucho, and Edward Roland as the cautious black servant Okello. Cecilia Flores is excellent as Aguirre's observant daughter Flores while Armando Polanah is also good as the cautious Armando. Ruy Guerra is brilliant in his role as Ursua while Peter Berling is great as the greedy, indecisive Guzman. Helena Rojo is one of the best supporting performances as Inez, Ursua's mistress who sees nothing but trouble from the start as she is one of the film's more realistic, moral figures. Del Negro is really amazing in his role as Gaspar, a monk who has hopes to spread the word of Christ only to realize how cruel the world of nature is.

Finally, there's Klaus Kinski in what has to be one of the most terrifying and manic performances captured on film. Kinski commands every scene in the film where it's his striking blue eyes and face that really shows that it's his film and his only. Though Kinski allows himself to be restrained only when he needs to in scenes that shows his sensitivity towards his daughter. A lot of it is done with a kind of intensity to reveal the madness of his character. It's a very intimidating performance to see as Kinski drives the film to its depth of horror where he goes into this journey unaware that he's in a battle against nature. Overall, it's truly one of the most magnificent performances ever.

From the Herzog-Kinski DVD Box Set from Anchor Bay. The DVD presents the film in its original, full-screen presentation ratio of 1:33:1 and 5.1. Dolby Digital Surround Sound for its original German language and Mono for the English dub. The DVD includes a theatrical trailer in both English and German along with the talent bios of Herzog and Kinski. The big special feature is a full audio commentary track from Herzog and Norman Hill. The commentary track is truly one of the most enjoyable as Herzog reflects on making the film while discussing its psychology and his views on nature. Herzog reveals that the camera he and Thomas Mauch used was a 35mm camera Herzog stole when he was in film school that he used in 9 films. Herzog admits that there wasn't much of a script written nor a lot of ideas were planned. He doesn't storyboard so everything was improvised. Herzog also discussed Kinski where at times, he can be sensitive and sweet but then, he has a side that's very unpredictable to the point that he almost killed an actor during filming. The commentary overall is insightful to the process of filmmaking and Herzog's own unique talents.

I remember seeing the opening shot of the long trail of people making their way along a mountain trail and I thought to myself, "That must have taken almost as much effort to set that up and shoot it as that of a real army crossing over the mountain".

I bet. Everything Werner Herzog does is taken to certain extremes. It's amazing about how he shot that film in the Amazon considering what he had to do to tell this story. Not to mention to deal with a crazed psychopath in Klaus Kinski.