Originally Written and Posted at Epinions.com on 5/24/09 w/ Additional Edits. 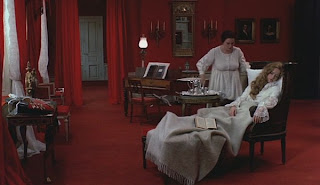 Written and directed by Ingmar Bergman, Viskningar och rop (Cries & Whispers) tells the story of two sisters watching over their third sister as she is dying on their deathbed. With a maid watching over the dying sister, the two sisters become haunted by their own fractured relationship as well as the sister that is dying. The film is a meditation on death as well as the complex relationship of sisters as it plays on to one of Bergman's exploration into the themes of death. Starring Bergman regulars Harriet Andersson, Ingrid Thulin, Liv Ullmann, and Erland Josephson plus Kari Sylwan and Anders Ek. Viskningar och rop is a haunting yet entrancing film from Ingmar Bergman.

It's a quiet autumn day in the 1800s as Agnes (Harriet Andersson) is dying of cancer as she recalls memories of her mother (Liv Ullmann) and the moment they connected as a young girl (Rossana Mariano) despite times that they weren't because she was more attentive to her younger sister Maria (Lena Bergman). Staying in the family mansion are Maria (Liv Ullmann) and eldest sister Karin (Ingrid Thulin) along with their maid Anna (Kari Sylwan). A doctor (Erland Josephson) visits to check on Agnes where he tells Karin about Agnes' condition. Meanwhile, Maria tries to seduce the doctor who refuses. Especially as Maria recalls a time when she tried to seduce the doctor when he was trying to take care of Anna's child, who was gravely ill at the time. Maria's infidelity forced her businessman husband Joakim (Henning Moritzen) to stab himself because of her infidelity and selfishness.

With Agnes falling very ill and clinging on to her ever-so loyal maid Anna, the two sisters help out but what happens would be horrific. After the priest (Anders Ek) arrives to perform a service, he reveals about Agnes' faith which was far stronger than his own faith in God. Karin meanwhile, thinks of her troubled relationship with her husband Fredrik (Georg Arlin) who is a diplomat. Karin's sexually-repressed nature forces her to mutilate herself in such a shocking manner. Maria, desperate to have some sort of reconciliation with the repressed Karin, asks her sister to reform some bond as Karin refuses as she says cruel things to her youngest sister. During this emotional moment, Anna suddenly hears something as Agnes is desperate for her sisters to help her. What happens would enforce the true nature of the sisters with Anna watching all that is going on.

Bergman's interest in death and face has been prominent in many of his films. Yet, none of them could reach the level of such terror and high emotion that he displays in this film. While the film is mostly shot inside the manor that mostly features four prominent characters, all of them being women. It is a film about estranged sisters and how they all cope with the upcoming death of one of their own. Watching all of this is Anna, the good-natured, loyal maid who takes care of the dying Agnes as she is laying on her final moments. Amidst all of this drama, the other two sisters are dealing with guilt and shame as each of them recall some horrible moments in their own past. In the youngest, Maria, she is a woman who is shallow, flirtatious, and never really considers any idea of loyalty as she hurts her husband and the doctor who she tries to seduce. Then there's Karin, a woman who is all business but is very cold at heart with suppressed feelings towards everyone including her own sexual desires.

Bergman's screenplay definitely delves into the themes of morality, faith, and death along with its emphasis on character study. The story is structured to capture what each major character is feeling as it's told in theatrical kind of style through Bergman's direction. In fleshing out the structure of the story, Bergman uses red-fade outs to get the story going into either a flashback or to get the story to move forward. Bergman's camera is very engaging into all of the drama as his compositions feature some striking moments from the close-ups of the individuals present in the film. Even as half of their face is covered in black. Yet, he even moves the camera with tracking shots to capture the intensity of what is happening. Bergman's staging and presentation truly shows the director at the height of his power as he creates film that is entrancing as well as mesmerizing in its images and drama.

Longtime cinematographer Sven Nykvist does spectacular work with the film's cinematography with gorgeous, colorful exterior shots in some of the film's dreamier sequences. Nykvist's interior work whether its day or night definitely plays up to the tone of the film while the usage of red is very striking to emphasize the feeling of death. Even through some dark nighttime scenes, there's a haunting tone to the shot and lighting as Nykvist's photography is truly exquisite as he creates some of his best work in his long, influential career. Editor Siv Lundgren does great work with the editing in the use of smooth transitions, dissolves, and most of all, the fade-to-red cuts to flesh out its structure while giving the audience of a flashback or as a transition cut to move the story forward.

Production/costume designer Marik Vos-Lundh does amazing work with the film's art direction in decorator main parts of the house from the walls and ceiling with red while putting on 19th Century appliances and objects around the house. The look of the house inside is truly mesmerizing as it reveals a haunting quality of the film that is played throughout. The costumes is filled with some great work from the lavish, cleavage-baring dresses that Maria wears to the more tightened up, black clothing to display her personality. Overall, the costume and set design work is phenomenal. The sound work of Tommy Persson, mixers Owe Svensson and Sven Fahlen is mesmerizing with the sounds of winds, screams, and whispers that play throughout the entire film. Even as it plays out to something that can be described as chilling to give a feel of terror. The film's music features compositions from Johan Sebastian Bach in its dramatic presentation played by violinist Pierre Fournier along with the striking, somber piano composition from Frederic Chopin.

The cast is definitely well-assembled with some notably small roles from the daughters of Ingmar Bergman (who briefly serves as a narrator) as Lena as the young Maria and Ingrid (not the famous actress) as a spectator along with producer Lars-Owe Carlberg as a spectator in a flashback scene. Other small roles include Rossana Mariano as the young Agnes, Monika Priede as the young Karin, Linn Ullmann as Maria's daughter, and Malin Gjorup as Anna's daughter. Other memorable key small roles include Anders Ek as the faithfully-challenged priest, Georg Arlin as Karin's loveless husband Fredrik, and Henning Moritzen as Maria's distraught husband Joakim. Longtime Bergman collaborator Erland Josephson is excellent as the doctor, a man who is concerned with Agnes' health while trying to evade the seductive flirtations of Maria.

Kari Sylwan is brilliant as Anna, the loyal maid who is willing to comfort Agnes by any means while being the only character with a good heart. Sylwan's mostly silent yet entrancing performance is really the performance that holds the film altogether as it's really one of the best performances ever presented. Harriet Andersson is great as Agnes, the dying sister dealing with her illness as well as some regrets she have wishing for a full-scale union with her sisters. Andersson's performance is mostly physical as she sells the despair and struggle of her ill character as it's definitely one of the most haunting performances captured on cinema.

In a dual role as both Maria and the mother of the sisters in flashback, Liv Ullmann brings in one of her greatest performances to date as two different women. In the role of the mother, Ullmann presents a character who is quiet but also loving while as Maria. Ullmann uses her beauty as both entrancing but also disgusting. Ullmann brings a flighty, seductive quality but underneath all of that vanity is a woman who is truly horrible in not being devoted to anyone at all. It's a mesmerizing role from one of Bergman's great actresses. Another of Bergman's longtime collaborators is Ingrid Thulin as the cold, hostile Karin. Thulin's performance is very restrained as she plays a woman extremely repressed in her emotions and not wanting to be touched by anyone. Yet, there's something really horrifying about Karin as she mutilates herself and smears blood on her face that shows that the character really needs help. Thulin's performance is really amazing in both its sense of terror but also sympathy as a woman is really crying for help.

Viskningar och rop is a haunting yet eerie film from Ingmar Bergman. Thanks in part to some great art direction, costume design, sound work, editing, the eerie cinematography of Sven Nykvist, and the performances of Kari Sylwan, Harriet Andersson, Liv Ullmann, and Ingrid Thulin. It's a film that will definitely question the viewer's thoughts on death, faith, and family. For fans of Ingmar Bergman, this film is without a doubt one of his best films of his career. Those new to Bergman will see this as a nice introduction though his earlier late 1950s films are much better intros to the late, great director. In the end, Viskningar och rop is a must-see film from Ingmar Bergman as it confronts death and faith to its sometimes, horrifying core.

Beautiful review! I love this movie and its deifnetly one of Bergman's best, but it is incredibly heavy. However it's definetly worth seeing, the acting is mindblowing here, Bergman was really a very lucky director to find so many great actresses who appeared in many of his movies.

Thank you. This was definitely a film I will never forget. I was just in awe of the performances but what made me realize how powerful it was were those screams. Man, I could never forget the way they sounded. It's probably my favorite Bergman film at this point.