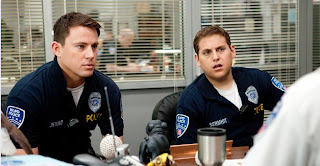 Based on the 1980s TV show by Patrick Hasburgh and Stephen J. Cannell, 21 Jump Street is the story of two former high school classmates who become undercover police officers as they return to high school to uncover a drug bust. Directed by Phil Lord and Chris Miller with a script by Michael Bacall based on a story by Bacall and Jonah Hill. The film is an updated take on the hit 80s TV show that starred Johnny Depp as it explores new high school social orders and the world of undercover police officers. Starring Jonah Hill, Channing Tatum, Brie Larson, Dave Franco, Rob Riggle, Ellie Kemper, Nick Offerman, and Ice Cube. 21 Jump Street is a riotous yet very entertaining film from Phil Lord and Chris Miller.

Two former schoolmates in Morton Schmidt (Jonah Hill) and Greg Jenko (Channing Tatum) meet up seven years after senior year in the police academy where they become buddies helping each to become police officers. After being assigned to park patrol where they would encounter a drug trade as they managed to nab a dealer but Jenko forgot to read the Miranda rights. After the screw-up, Captain Hardy (Nick Offerman) has the two transferred to a revived undercover specialty unit led by Captain Dickson (Ice Cube) who would have them return to high school to uncover a new drug craze that is spreading around various high school campuses. Living with Schmidt’s parents for the assignment, Schmidt and Jenko learn that the social order of high school has changed as they pretend to be brothers.

With Jenko hanging out with the nerds as he accidentally takes Schmidt’s classes, Schmidt ends up hanging out with the popular kids led by Eric (Dave Franco) who is the main dealer of this new drug. Wanting to impress Eric, Schmidt and Jenko throw a party where they gain Eric’s trust while Schmidt also befriends Eric’s friend Molly (Brie Larson). With Schmidt part of Eric’s inner circle while Jenko manages to get a group of nerds to tap into Eric’s phone to hear conversations. Yet, Jenko becomes upset over Schmidt’s newfound popularity in school as a moment to uncover more of what Eric is doing goes bad. When prom is about to start where a deal is about to happen, the two finally decide to figure out what is going on with some surprising results.

Since the concept of the film is about a group of undercover who pretend to be high school students in order to infiltrate whatever drug culture is out there. The idea of a film based on an old TV show doesn’t seem very promising as a film. However, the result ended up being a whole lot better than its concept suggests by exploring the world of the high school social order where two young men become baffled by these changes. Particularly as one of them was a jock and the other was a nerd back in school where neither of them came out of high school satisfied. Going back would give them a chance to a do-over as well as becoming great cops but the changing times and the new drug craze would have them be in very different positions.

Michael Bacall’s screenplay does follow a formula of sorts that is expected in these action buddy-comedies. Taking that formula and infusing it with the concept based on the TV does allow Bacall to for a lot of bawdy humor in the fact that these two guys are inept cops. Schmidt is insecure due to his physicality, lack of social skills, and can’t really fire his weapon at someone. Jenko is an imbecile who gets by with his looks but can’t remember the Miranda rights while is pretty ignorant about school subjects. Together, they become this unlikely duo where they would start to improve themselves in different ways. Schmidt becomes more confident while Jenko starts to use his brains where they would become this awesome duo.

Bacall’s script succeeds in developing the characters while reveling into how times had changed from the mid-2000s to the early 2010s. Back then, jocks ruled where a guy like Jenko was able to get away with anything, except in academics, while Schmidt tries to be cool by looking like Eminem only to be rejected by a girl. Through some witty dialogue that reaches into lots of raunchy humor and action scenes that revel in a mix of humor and playing with clichés. Bacall creates a truly fantastic yet extremely enjoyable buddy comedy that does more than what its genre suggests.

Directors Phil Lord and Chris Miller do an excellent job in creating a buddy comedy that mixes over-the-top violence with frat-boy humor that is pretty wild. While a lot of the compositions in terms of its simpler, light-hearted moments are quite straightforward. They’re still engaging for the way it will play up the drama while they create one of the film’s most hilarious moments involving this drug that takes its time to play up the humor. Notably as it would escalate from one funny moment to something funnier and funnier as the drug itself proves to be very powerful. It’s among the many moments in the film where Lord and Miller are allowed to let the humor play out while getting their actors to be really comfortable in their parts.

The film’s action scenes also have Lord and Miller play up with the clichés as its most notable is this hilarious chase scene involving bikers, traffic jams, and all sorts of things that is expected in the action genre. What is unique about it is the fact that they play with what is expected as the main characters are wondering if something is about to happen and they’re caught off-guard. Notably in the film’s climatic moment where they meet up with the supplier as it would include a surprising mix of over-the-top violence and humor as it proves that Lord and Miller are able to do a lot with these sequences while not going too far into the conventions. Overall, Lord and Miller create a truly exhilarating and funny action buddy comedy that does a whole lot more for its genre.

Cinematographer Barry Peterson does a nice job with the film‘s photography to play up the sunny look of the locations, set in New Orleans, while providing some stylish looks for some of the film‘s nighttime exterior and interior settings. Editor Joel Negrone does an excellent with the editing in creating amazing montage scenes to play up some of the craziness of the humor with swift cuts that aren‘t too fast while maintaining more straightforward cuts for the light-hearted moments. Production designer Peter Wenham, with art directors Scott Plauche and Thomas Valentine as well as set decorator Bob Kensinger, does a superb job with the look of the 21 Jump Street base that Captain Dickson works at that includes a hilarious prop of a Korean version of Jesus Christ. Costume designer Leah Katznelson does a very good job with the costumes from the early look that Schmidt wears in the film‘s first scene to more casual yet stylish looks to play up the many cliques in high school.

Visual effects supervisor Richard Edlund and Helena Packer do terrific work with some of the film‘s minimal visual effects scene including some of hilarious montages involving the side effects of what happens when being on the drug. Sound editor Geoffrey G. Rubay does a superb job with the sound work to capture the atmosphere of the party scene as well as the chaos in some of the film’s violent moments. The film’s score by Mark Mothersbaugh is wonderful for the thrilling score that mixes bit of orchestral elements as well as electronic music to play up the energy of the action scenes. Particularly as the film’s soundtrack is a mix of party music for many of the party scenes.

The casting by Nicole Abellera and Jeanne McCarthy is brilliant for the ensemble that is created which does include cameos from a few actors of the original TV show. Notable small roles include Dakota Johnson as an undercover cop, Caroline Aaron as Schmidt’s smothering mother, Jake Johnson as the school principal, DeRay Davis as a drug dealer named Domingo, Nick Offerman as Schmidt and Jenko’s original superior Captain Hardy, and Johnny Simmons as a nerdy kid that Jenko befriends. Rob Riggle is very good as the brash P.E. coach Mr. Walters who always tries to intimidate Schmidt and Jenko while Ellie Kemper is very funny in a small role as science teacher who is sexually attracted to Jenko. Dave Franco is excellent as the laid-back drug dealer Eric who tries to do things low-key in an attempt to be powerful.

Ice Cube is great as the profanity-spouting and intimidating Captain Dickson who always berates Schmidt and Jenko while trying to get them in line as it is Cube going back to his gangsta roots. Brie Larson is wonderful as Molly whom Schmidt falls for as Larson brings a nice charm to her character while proving be just as bawdy as the guys in the film’s third act. Finally, there’s the duo of Jonah Hill and Channing Tatum as they really are the heart and soul of the film. In the role of Schmidt, Hill brings a goofy charm to his character that tries hard to be cool while also being inept when it comes to getting physical. For the role of Jenko, Tatum is the film’s real surprise as he brings a real laid-back humor that also goes a little out there as he seems very comfortable playing the role of a dim cop who later becomes smart. Hill and Tatum’s chemistry is a joy to watch in the way they interact and do hilarious things together.

21 Jump Street is a flat-out hilarious buddy action-comedy from Phil Lord and Chris Miller featuring amazing performances from Jonah Hill and Channing Tatum. Along with amazing supporting work from Brie Larson, Dave Franco, and Ice Cube plus lots of insane gags that will keep audiences laughing their ass off. It’s a comedy that gets it right in terms of taking the premise of the original 1980s TV show and making it feel fresh while paying tribute to that show. It’s also a comedy that isn’t afraid to go the extra edge of being raunchy and inappropriate just so it can get a laugh in the right way. In the end, 21 Jump Street is marvelously-crafted action-comedy from Phil Lord and Chris Miller.

This movie was very, very funny mainly thanks to the chemistry and performances from Hill and Tatum. They are both awesome together and both seem like they could be friends in real life, which is what this film sort of talks about. Tatum, in my honest opinion, is an actor that is at least trying his hardest with every single flick he gets and I think this is his next big step into seeing what he's really good at. And he's really good at comedy. Nice review Steve.

Thank you. I still don't have a high opinion on Channing Tatum as an actor but he made laugh my ass off during the trip-my-balls off scene. Notably the stuff with band practice and science.

I loved watching Tatum and Jonah Hill together. I couldn't stop laughing throughout the film. I really enjoyed the hell out of it.